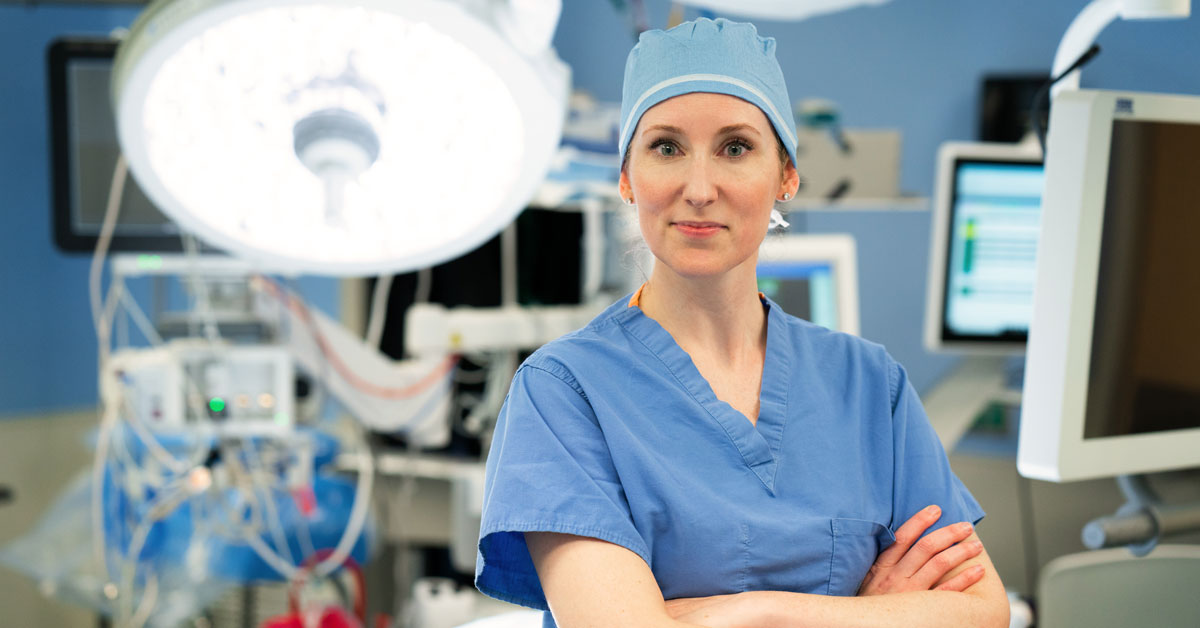 Lorraine Kelley-Quon, MD, MSHS, FAAP, loves everything about being a surgeon — from her fascination with human anatomy to the way the role taps into her talent for precision, quick decision making and fine motor skills. Surgeons, she says, “are the Marines of medicine.”

She especially loves being a pediatric surgeon, in part because the perspective is so vast. “When you fix a problem in a baby or a child,” she says, “you affect their entire lifetime.”

In many ways, Dr. Kelley-Quon was destined for a medical career. The oldest of four children, she was born in Davis, CA, while her father was attending medical school. During high school and college, she accompanied him on medical mission trips to Kenya, Sudan and Central America. By then, she knew she wanted to be a doctor.

When she chose surgery, she joined a growing number of women who are knocking at the door of a specialty that hasn’t always been fully welcoming. The Association of American Medical Colleges reports that while women are now more than half of medical school enrollees, they comprise less than one quarter of practicing surgeons.

However, in her surgical residency training at UCLA, when she was Chief Resident 2014-2015, the future had already arrived. “Six of of our seven members were women and four of us were mothers,” says Dr. Kelley-Quon, calling the phenomenon “the changing faces of surgery.”

Not content to simply push that envelope, Dr. Kelley-Quon also completed a research fellowship during that time as a Robert Wood Johnson Clinical Scholar. There, she learned to “ask big questions about health care and how to make our system better,” she says.

Ultimately, she earned a Master’s in Health Services Research from the UCLA Fielding School of Public Health, where she began mining large databases to track factors in health outcomes that gave her “a 30,000-foot view of what’s actually going on.”

In 2017, she brought that sweeping perspective to Children’s Hospital Los Angeles as a pediatric surgeon and an assistant professor of surgery and preventive medicine at the Keck School of Medicine of USC.

She arrived with a passionate research focus — the impact of prescription opioid misuse on children and teens — inspired by her pediatric surgery fellowship at Nationwide Children’s Hospital in Columbus, Ohio. Ohio was front and center in the nationwide opioid epidemic, and many of the children Dr. Kelley-Quon saw were born to opioid-addicted mothers.

“One of the most compelling things about pediatric surgery is that we see everything,” she says, “including the children with no health insurance, no safe place to sleep, no family, with food insecurity or experiencing abuse.”

In Ohio, Dr. Kelley-Quon realized she could help children who had birth defects or severe gastrointestinal issues through surgery, “but the things that are going to define their lives — a parent involved in substance abuse, growing up in foster care — I couldn’t touch.”

Now, she is contributing to CHLA’s multifaceted efforts to address the opioid epidemic and its fallout for children and teens, in collaboration with fellow surgeons and specialists in addiction, adolescent health and pain management at CHLA and USC.

“People often don’t think about kids when it comes to opioids,” says Dr. Kelley-Quon. “But they are deeply affected.”

Prescriptions for opioids among adolescents and young adults doubled from 1994 to 2007. Opioid-related overdoses in teens currently are on the rise, after a short period of decline. More than 10 percent of U.S. adolescents received an opioid prescription in 2018.

Prior to the 1990s, opioids were infrequently prescribed for pain. Then a movement emerged within the medical community to consider pain as the “fifth vital sign,” in addition to body temperature, blood pressure, pulse and respiratory rate. That, along with aggressive pharmaceutical marketing for proactive pain management, “pushed the U.S. into the current opioid crisis,” says Dr. Kelley-Quon.

In 2019, she took the reins of the American Pediatric Surgical Association’s initiative to generate evidence-based guidelines on opioid prescribing for children after surgery. She also collaborated on the first prospective study to track prescription opioid and heroin use in teens. The investigators found that teens who use prescription opioids recreationally are more likely to start using heroin by high school graduation.

With pain management a concern for all ages, Dr. Kelley-Quon recently published a review on non-opioid pain management strategies for neonates. Newborns have rapidly developing brains, and “if we don’t control their pain well,” she explains, “they can have poor developmental outcomes.”

Currently, Dr. Kelley-Quon is a KL2 Mentored Career Development Scholar with the Southern California Clinical and Translational Science Institute, established by CHLA and USC. She is studying postoperative opioid use by adolescents in an attempt to identify predictors before surgery of drug misuse and diversion and to develop decision support tools for physicians to optimize opioid prescribing.

Although in the minority, women surgeons are on the rise, says Dr. Kelley-Quon, who notes “there is a lot of room for increasing the diversity of surgical leadership in particular.”

She counts herself fortunate to have had many strong mentors, both women and men. Her surgical training occurred at centers with a history of training women surgeons. At the same time, she has experienced gender-based bias. Moving forward, she says, “my mentors and my current partners at CHLA are driving national conversations about how to minimize that bias, and I can already see the needle moving!”

As a mentor herself, she tells her medical students to choose a field they’re passionate about. For her, that remains pediatric surgery. “I love working with kids and with families.”

Looking further down the road, Dr. Kelley-Quon would like to develop a research institution that explores health policy and children’s health care, and fosters a dialogue with legislators. There is no end to critical issues. “With every study I undertake,” she says, “I keep finding more questions.”