Keep Your Teen from Texting Behind the Wheel

My wife and I worry about our 16-year-old son texting and driving, which according to the reports I read, teens tend to do more than they should. I think we should take away his phone, but my wife thinks we should take away his car, which is really our car. But as parents, we agree that we are so terrified that if he does this, he may hurt himself or someone else.

According to news reports, we have every reason to be terrified, as car crashes continue to be the leading cause of harm for teens. Earlier this year, the Governors Highway Safety Association released a study that showed 16- and 17-year-old driver deaths increased 19 percent in the first six months of 2012, many of them attributable to distractions like texting while driving.

It doesn't take a rocket scientist to know that texting and driving is dangerous. But plenty of teens continue to do it. Most troubling is, even with all the stories of tragic car accidents happening as a direct result of distracted driving, teens and adults are still texting at the wheel. 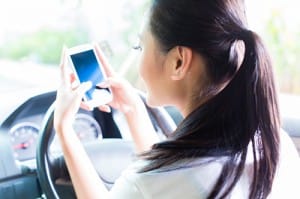 According to a recent nationwide survey commissioned by Bridgestone Americas, Inc., 95 percent of teens surveyed admitted to texting while driving. The use of cell phones, whether talking or texting, contributes to 1.6 million crashes per year (according to the National Safety Council), which makes it a necessity for all parents to address smartphone use among teens who are driving.

If you’re trying to break texting and driving habits, the following techniques will help your teen to stay text free:

In closing, it’s no wonder car insurance premiums for teenagers are through the roof. It’s tough for your teen when their phone makes a noise while they’re driving down the road and their eyes are immediately drawn to the screen to see who needs them. Texts and phone calls let you know you're needed and important and most people can't help but look to see who needs them. It’s our human nature, but we must teach our teens it's also the cause of thousands of deaths and hundreds of thousands of injuries every single year across the United States.

I understand that good habits take time to form, about 21 days. If you do something repeatedly for 21 straight days your mind will accept it as a habit and make it a part of your daily life. Exercise routines and diet programs work this way. If you can make it 21 days in a row, you've formed a new habit to better your life. When it comes to the habit of texting and driving, you might be saving your teen’s life too!

For more information about how to talk to your teen, contact the Division of Adolescent and Young Adult Medicine.

Clinical-Child Psychology Postdoctoral Fellowship
Is Your Child a Migraine Sufferer? Ways You Can Help
Synthetic Marijuana: Dangerous “Designer” Drug
We Can All Do Our Part to Reduce the Number of Youth Experiencing Homelessness