Crouzon Syndrome is a genetic disorder marked by the premature fusion of certain skull bones during a child's development. It is the most common form of craniosynostosis. Premature fusion of the skull bones prevents the skull from growing normally and affects the shape of the child’s head and face. This can result in wide-set, bulging eyes and vision problems caused by shallow eye sockets. Other signs include eyes that do not point in the same direction (strabismus), a beaked nose and an underdeveloped upper jaw.

Children with Crouzon Syndrome may have dental problems and hearing loss, which is sometimes accompanied by narrow ear canals. A few have an opening in the lip and the roof of the mouth (cleft lip and palate). Other potential complications include airway obstruction, cervical spine anomalies and complications related to the eye. Occasionally, patients may experience frequent headaches or seizures.

The vast majority of cases of Crouzon Syndrome are caused by a genetic mutation, specifically in a gene called FGRF2 (fibroblast growth factor receptor 2) on chromosome 10. Less commonly, the cause is a mutation in FGRF3 on chromosome 4.

In some cases, an affected person inherits the mutation from an affected parent (one parent passing on the gene is enough for a child to exhibit the syndrome). However, most cases result from a new, spontaneous mutation and occur in people with no family history of the disorder. In families where the parents are apparently unaffected, the recurrence risk for their future offspring is considered low.

Prenatal ultrasound may miss cases of Crouzon Syndrome. For families in which a gene mutation is identified, prenatal diagnostic testing is a possibility.

In the Division of Plastic and Maxillofacial Surgery, we approach Crouzon Syndrome with an interdisciplinary team of expert surgeons and specialists in (but not limited to):

Surgery takes place in multiple stages and may begin by addressing the craniosynostosis to prevent the closure of gaps between the skull bones. It is important to keep these gaps from fusing together, as premature fusion can cause brain damage or result in underdevelopment. In addition, extensive facial and orthodontic surgery typically are required.

Before and After Photos 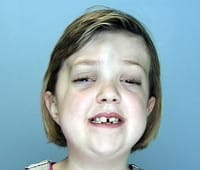 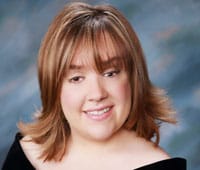