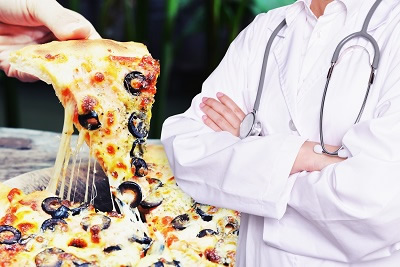 Doctors in training, known as medical residents, often find themselves tasked with significant clinical responsibilities while continuing to learn how to be a physician. Many hospitals offer lecture conferences to supplement the education of residents, but turnout to these conferences is not always ideal, which begs the question: how can hospitals increase attendance? The answer may actually be quite simple.

A new study out of Children’s Hospital Los Angeles shows that conference attendance and arrival times improved significantly when complimentary food like pizza was provided. The study is published online in the journal Medical Education.

Co-authors Michael J. Cosimini, MD and Liza Mackintosh, MD, in the division of General Pediatrics, along with senior author Todd P. Chang, MD, of the Division of Emergency and Transport Medicine, had long suspected that food was a strong lure for residents.  Yet, little research existed with respect to how the provision of complimentary food affects physician and resident conference attendance.

In a retrospective study of pediatric resident conference attendance over an 11-month period at a large pediatric residency program, the research team sought to determine whether complimentary food improves resident arrival times and attendance at educational conferences and to test whether this provision is a potentially cost-effective tool for improving education. Residents were provided with meal stipends to pay for food during some conferences and pizza was offered at others.

The team found that attendance improved nearly four percent when complimentary food was provided, and on-time arrivals jumped from 65 percent to over 75 percent. However, providing complimentary food may not be cost effective, as improvements in attendance would have to justify the additional cost.

What inspired this study?

During his time as a chief resident, Cosimini and his co-chiefs at CHLA noticed that the ingredients for this study were already in place, as food for the residents was being provided on alternating Fridays.

“When we looked into it, we were surprised to see that almost no literature existed on the subject of food as an educational motivator” Cosimini remarked. “With Dr. Chang’s mentorship, what started as a funny, side project in the chief’s office turned into a serious investigation.”

While performing this study, Cosimini and Mackintosh were responsible for scheduling the noon conferences, and they were invested not only in the quality of the educational content but, in the attendance of residents.  Since time is tight for pediatric residents, they wondered whether providing food made it easier for them to get to conference.

What did they learn?

“While it seemed a forgone conclusion that providing lunch would fill seats, we were surprised at the small difference seen. Pizza had a limited effect on the behavior of our resident physicians and each additional resident in attendance came at the cost of $46; a reminder that you never know the truth until you measure it,” noted Cosimini.

The program good-humoredly describes some conferences as “Panda-tory” observing an apparent increase in attendance when Panda Express is served. This statement has yet to be evaluated.