An Inside Job: Using DNA to Target Cancer 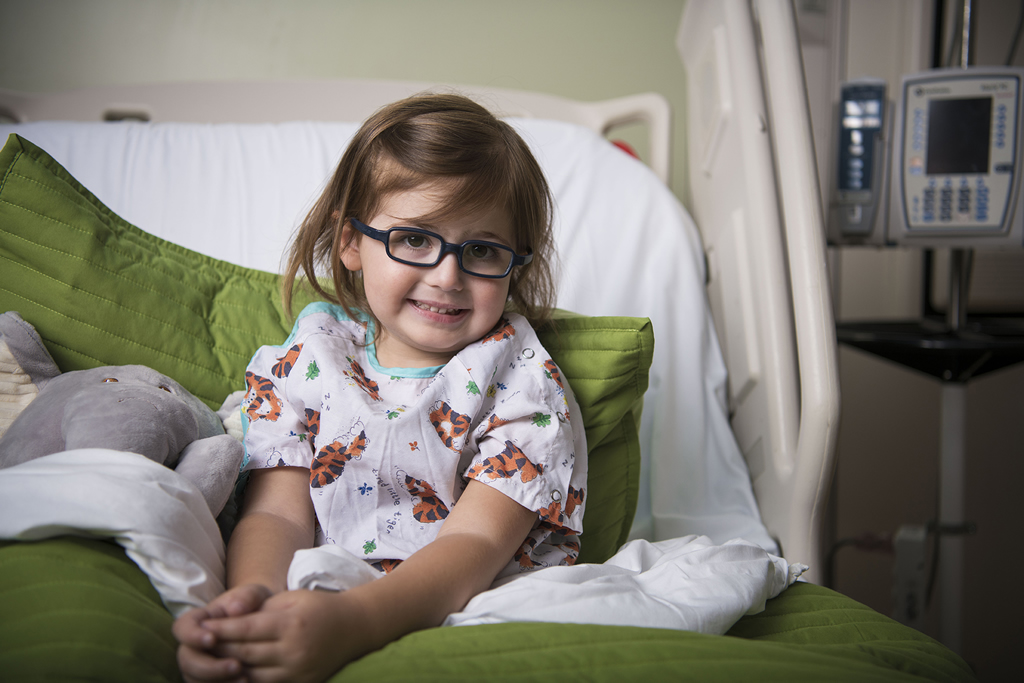 FDA grants accelerated approval for Vitrakvi® (larotrectinib) for the treatment of solid tumors. This is the second FDA-approved drug for cancers based on their genetic makeup as opposed to location in the body.

While other toddlers her age were fighting naptime, two-year-old Michelle was battling an aggressive, life-threatening cancer. Doctors at Children’s Hospital Los Angeles saved her life in an epic battle, wielding what is being hailed as a “magic bullet” in the fight against certain cancers.

CHLA’s Leo Mascarenhas, MD, MS, saw promise in larotrectinib when he helped design the clinical trial testing its safety and efficacy, but nobody could have foreseen just how dramatic the results would be. Flash forward to today, when Mascarenhas, the Deputy Director of the Children’s Center for Cancer and Blood Diseases and the Section Head of Oncology reflects on the patients he’s treated with larotrectinib. “Honestly, it’s a remarkable drug,” he says. “It’s probably the most impressive drug I’ve seen in my career.” Mascarenhas is also an associate professor of clinical pediatrics at the Keck School of Medicine of USC.

Radiation and chemotherapies have come a long way. Many cancers that were once hopeless from a treatment perspective are experiencing high rates of cure. Still, some tumors remain resistant to chemotherapies, proving elusive to scientists who seek answers and to clinicians who aim to cure their patients. Cancers are often defined by where they grow in the body- ovarian cancer, colon cancer, skin cancer. Likewise, there is a unique approach to treatment in each case. But what if we were no longer limited to treating cancer based on its location in the body or the tissue type it affected? What if, instead, we could find a common thread that linked all tumor types? As it turns out, some cancers share genetic anomalies that could provide this missing key. Researchers are probing at the DNA inside each cancer cell to discover new, targeted treatment options.

Whereas once this might have seemed like an out-of-reach goal, investigators and clinicians at CHLA are already implementing strategies to make this a reality. Patients are now able to benefit from CHLA’s OncoKids®, a specialized assay that tests a patient’s cancer for various biological markers. Results from the OncoKids panel can help doctors diagnose and treat pediatric patients based on the genetic makeup of their tumor.

Earlier this week, the FDA granted accelerated approval for Vitrakvi® (larotrectinib), a drug that targets tumors with something called a TRK fusion – a fusion of two normal genes that, when combined, cause cancer. TRK fusions are estimated to cause up to 1% of solid tumors.  But unlike some cancer-causing mutations – like the BRCA mutation in breast cancer – TRK fusions can cause cancer in any tissue type in the body. Larotrectinib is an oral medication that targets TRK fusion. It is only the second drug approved by the FDA that is “tissue-agnostic,” not specific to the location of the tumor but instead targets tumors based on genetics. Development and approval of larotrectinib marks a move towards more targeted therapies for the treatment of cancer.

Mascarenhas oversaw the treatment of several patients at CHLA, including young Michelle, as part of the clinical trial for larotrectinib. Michelle’s story unfolded over the course of just a few days, when a tumor the size of a pea grew so large that it nearly crushed her airway. Through the use of the OncoKids® panel, doctors learned that Michelle’s cancer bore a TRK fusion.  In what can only be described as a well-orchestrated push to fight for Michelle, surgeons, oncologists, clinical research staff, and even pharmacists at CHLA worked around the clock to sign Michelle up for the clinical trial and get access to the medication.  This massive effort was not in vain – like the majority of patients involved in the trial, Michelle experienced a rapid, dramatic reduction in her tumor size.

This year, Mascarenhas co-authored articles in the New England Journal of Medicine and the journals Lancet Oncology and Cancer demonstrating results from the clinical trial. These reports describe larotrectinib’s “rapid, potent, and durable antitumor activity” in patients of all ages with TRK fusion tumors. Michelle can’t yet read these reports, but the result she likely cares most about was getting to return home to her family.

To the impressive feat of rapid reduction in tumor size (several had completely vanished), Mascarenhas adds that the side effects of the drug are minimal, “definitely nothing as severe as the side effects of chemotherapy,” Mascarenhas says.  Indeed, he describes larotrectinib as a “magic bullet” for tumors bearing TRK fusion.  “This drug doesn’t work in a particular type of cancer,” Mascarenhas says, “it works in any cancer that has the TRK fusion.  It works in lung cancer, colon cancer, salivary gland tumors, sarcomas, brain tumors, and thyroid cancers.  So that’s unique.”

How do striking results like these affect doctors who have dedicated their careers to caring for children with cancer?  “We were all amazed,” reflects Mascarenhas. “To see someone turn around from their death bed – it’s truly remarkable.”

The recent FDA approval will mean access to larotrectinib for families who were out of options.  But it also represents a step towards a future that Mascarenhas imagines.  “If we can find the true driving mutation in a cancer and learn how to target it effectively, then we can learn how to control cancer,” he says. “We may not be able to cure it but we could control it, like we do with high blood pressure and diabetes, so that people’s lives are not taken over by it.”