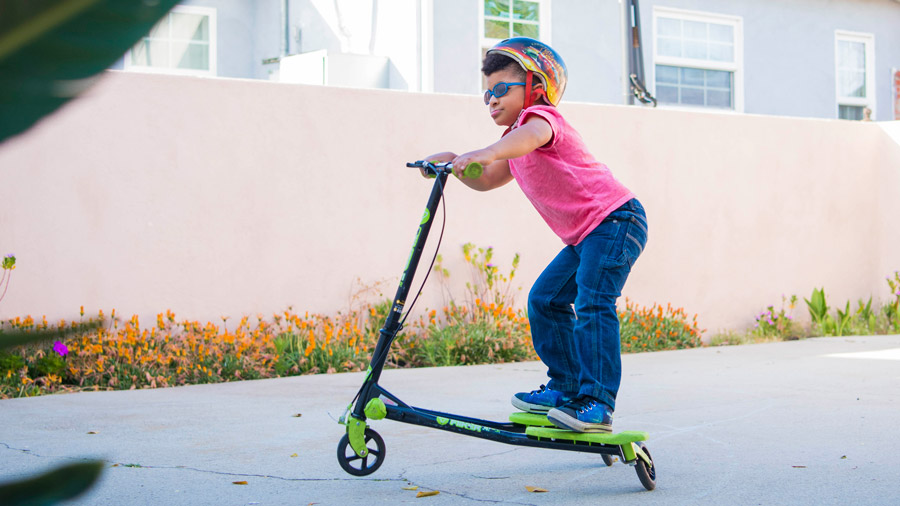 Who Will Jordan Be?
By Sarah Brown

A mother and father are determined to give their 6-year-old son the chance to succeed in life. Specialists at CHLA have given them the hope to do so.

If you are invited into his house, Jordan, age 6, will grab you by the hand and lead you to the family room. His father might be working at the computer, his grandma baking in the kitchen; his twin brother, Justin, and 9-year-old brother, Jadin, playing in the backyard. And as is often the case, mom runs the show. You will immediately feel at home.

Things have not always been so idyllic for Jordan, though. He spent two weeks in the neonatal intensive care unit when he was born, and doctors knew that something was not right, but they could not diagnose anything specific. He had crooked thumbs, larger than normal big toes, and breathing and feeding difficulties. The pediatrician’s advice: “Don’t Google anything. Just enjoy your baby for now, and when you are ready, take him to the best possible place, Children’s Hospital.”

“Our visit with Dr. Lightdale-Miric was weird,” says Jordan’s mom, Joy, with a tone of happy disbelief. (She is perhaps the most aptly named person in history.) 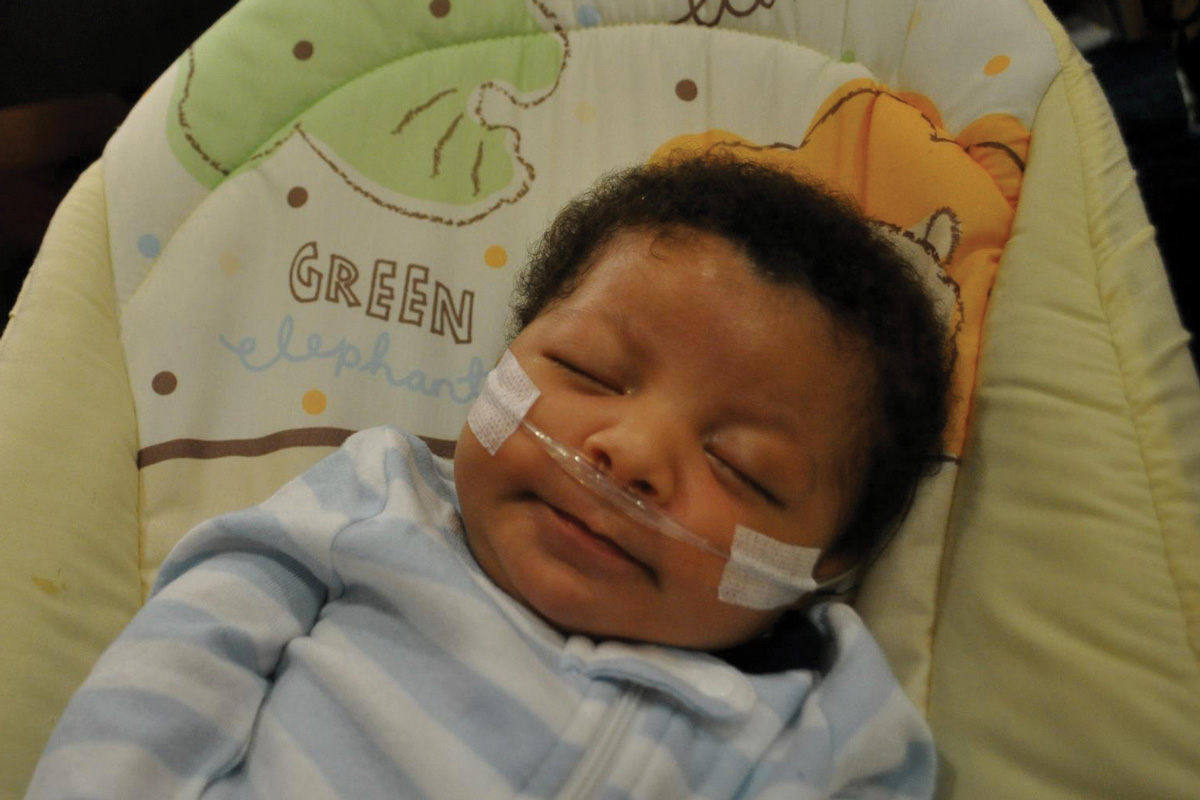 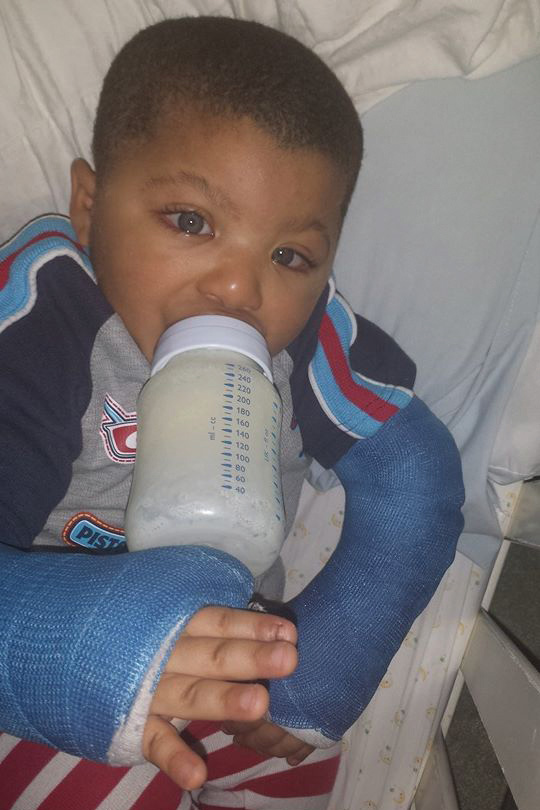 Nina Lightdale-Miric, MD, director of the Pediatric Hand and Upper Extremity Surgery Program in the Children’s Orthopaedic Center at Children’s Hospital Los Angeles, knew patients with Rubinstein-Taybi syndrome (RTS) when she saw them. The telltale crooked thumbs were one of the classic signs shared by most children with this rare genetic disorder. The family had already been to see Linda Randolph, MD, in CHLA’s Division of Medical Genetics, and was waiting on test results to confirm the diagnosis. Jordan was found to have RTS, though his gene mutation was different from that of anyone else in the world who had been tested to date.

Joy and her husband, Dain, had been trying to get the twin brothers to stop fighting as their first visit began. Lightdale-Miric sat and watched the frustrated and embarrassed mother try to control Jordan, but to her, Jordan’s “misbehavior” was completely developmentally appropriate for his age—and surprising for RTS.

“She told us, ‘He’s going places, and he’s going to need his thumbs,’” says Joy. “Those were her exact words.” And just like that, they had hope. “She gave us the courage to step up and be the parents he needed.” 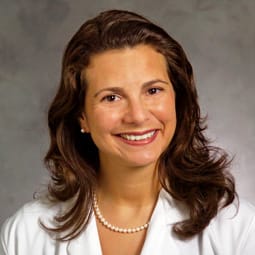 “A large part of our independence—our ability to communicate, our ability to complete activities of daily living on our own independently—is focused on pinch and grasp in some function,” says Lightdale-Miric. “Who knows what he’ll be able to do with those hands and those thumbs and his intelligence?” Now Jordan’s hands could keep up with his mind. And with his mom.

Lightdale-Miric describes the mobile classroom that Joy folds out of a backpack at every clinic visit.

“Every time you open the clinic door you can expect that mom’s singing, talking to him and engaging him in developmental learning activities,” she says.

Vision for the future

Joy and Dain began to notice that Jordan was having vision issues as well. When they called for Justin, he would come running. But when Jordan was called, he would respond by looking in every direction, unable to decide which way to go. A visit to Angela Buffenn, MD, at The Vision Center at CHLA, determined that Jordan was actually legally blind due to high myopia (nearsightedness). The day he got glasses was another game changer.

“I remember when John [the optician] put on his glasses, and he stood and he looked around. You could see that smile on his face, and he was just looking all over the place. He was just seeing,” says Dain.

Dain remembers Jordan holding Joy’s face and seeing her clearly for the first time, and then crawling over to see his twin brother’s face. “He laughed the whole way home. His head was just on a swivel.” Soon after his first clear sight came his first steps.

“He would stand up, but he would never let go because he couldn’t see the floor,” says Joy. “A month after getting his glasses, he walked.”

Another obstacle removed, another milestone achieved. 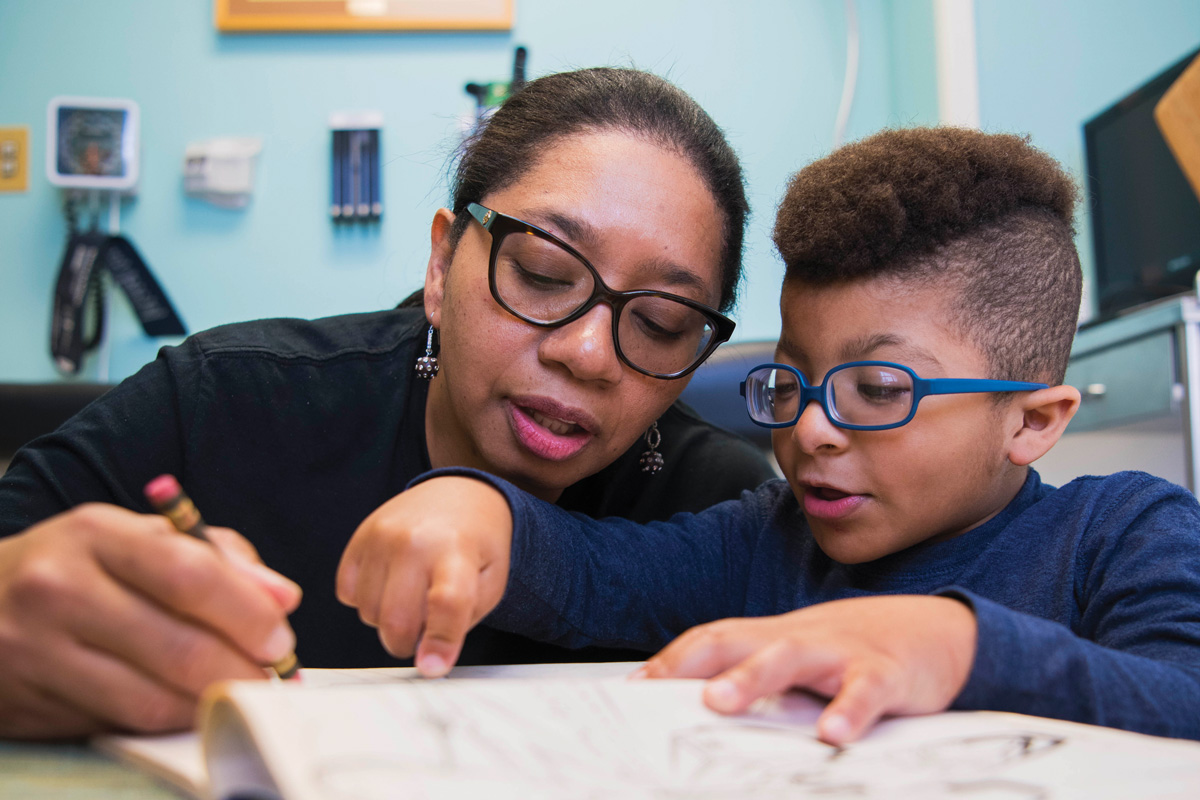 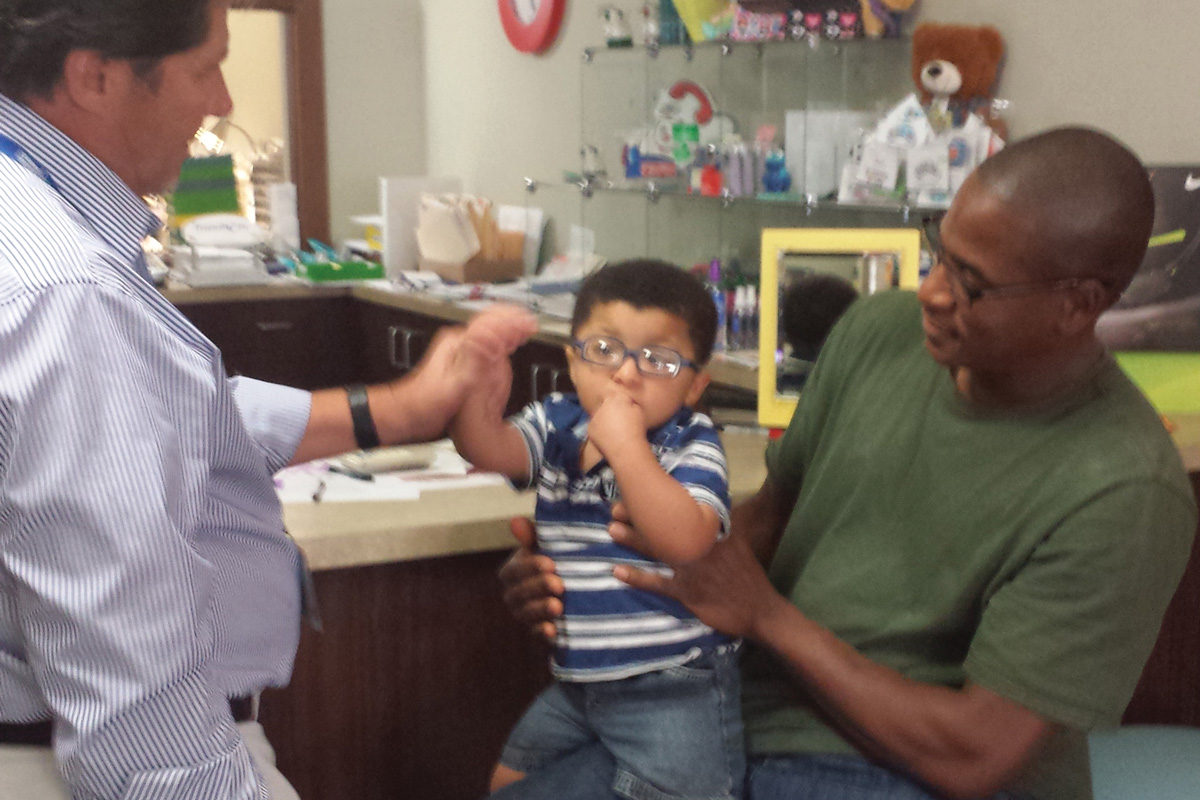 A breath of fresh air

Jordan’s digestive and breathing issues were another challenge. He had trouble breathing and would aspirate into his airway; he also had frequent ear infections and ended up in the hospital almost like clockwork every spring and fall, with respiratory syncytial virus (RSV), aspiration pneumonia or some other ailment.

“Jordan used to fall asleep during his meals, because it was difficult to eat and breathe because his airway was so crowded,” says Joy.

Doctors had tried swallow studies and procedures to check the condition of his lungs; he had tubes placed in his ears and a frenulectomy to try to correct his  swallowing issues. But nothing seemed to make much of a difference.

He eventually made his way to CHLA’s multidisciplinary Aerodigestive Program. Led by co-directors Manvi Bansal, MD, from Pulmonology; Vrinda Bhardwaj, MD, from Gastroenterology, Hepatology and Nutrition; and Christian Hochstim, MD, PhD, from Otolaryngology, the program brings together physicians and care providers from many disciplines to collaborate on diagnoses and care, and consolidate appointments and procedures for children with complex feeding and breathing issues. 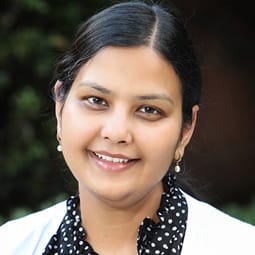 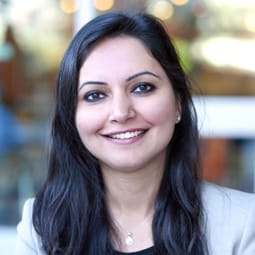 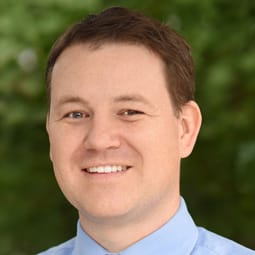 While CHLA’s division head of Urology, Roger De Filippo, MD, planned an operation to fix a urological issue for Jordan, Bansal took the opportunity to perform a bronchoscopy to get to the root of his problems. Minimizing the number of times Jordan went under anesthesia was especially important, as his breathing issues made this an exceedingly risky endeavor.

The results showed that his lungs were in great shape, but his tonsils and adenoids were enlarged and causing an obstruction in his airway. Six weeks later, Hochstim and Bhardwaj performed a combined endoscopy of the upper airway and GI tract to pinpoint the problem and find a solution. During that same procedure, Hochstim removed Jordan’s tonsils and adenoids.

Yet another obstacle removed, quite literally this time.

The difference was night and day. Jordan stopped falling asleep during meals. He was able to breathe while he slept. And he started doing better in school. Although he’d previously tested into special education classes, his parents noticed improvement and asked that he be retested. The result: He could now join a mainstream kindergarten class.

“He now has more oxygen getting into his brain, which has increased his brain function and his ability to process the information,” says Joy. “Isn’t that crazy?” “We often see that correlation with kids who are not breathing well at night with obstruction during sleep,” says Hochstim. “They are more fatigued and tend to struggle in school. It makes a big difference for them if we can help improve their breathing. It gives them better sleep, and better energy and performance.” 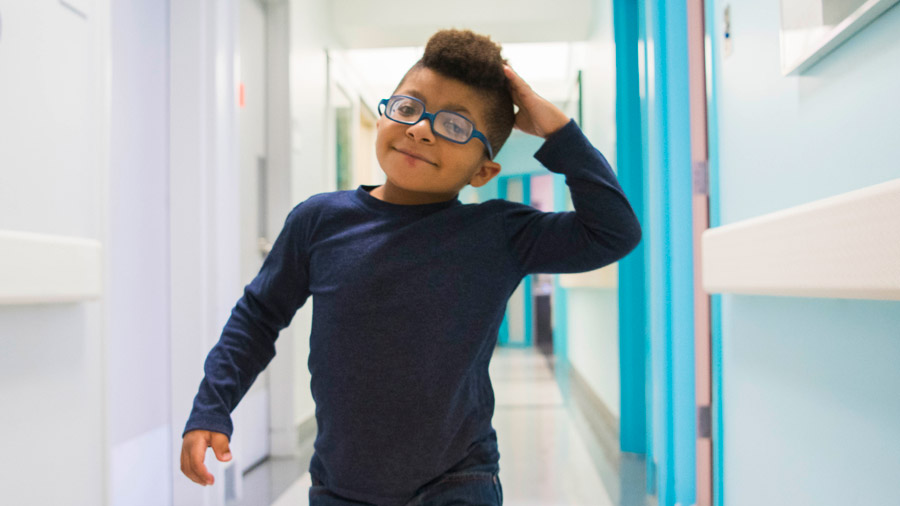 “The largest impact on Jordan’s life was having a group of people working together, like a ‘pit crew,’ that got him racing back to life and his family. The Aerodigestive team is a prime example of what health care should be.”
- Joy, Jordan's Mom

The upper endoscopy had identified a condition called eosinophilic esophagitis (EoE), a chronic allergic inflammation of the esophagus.

“We like to call this asthma of the food pipe,” says Bhardwaj, who is also director of the hospital’s Eosinophilic Gastrointestinal Disorders Program for Gastroenterology. Melinda Braskett, MD, of the Division of Clinical Immunology and Allergy, is the program’s director for Allergy. EoE can cause reflux, difficulty swallowing and vomiting, among other symptoms. This explained Jordan’s problems with aspiration, his longstanding abdominal discomfort and his general lack of enjoyment related to food.

“EoE is often associated with atypical food allergies and best evaluated and treated by a multidisciplinary team including gastroenterologists, allergists and dietitians,” says Braskett. 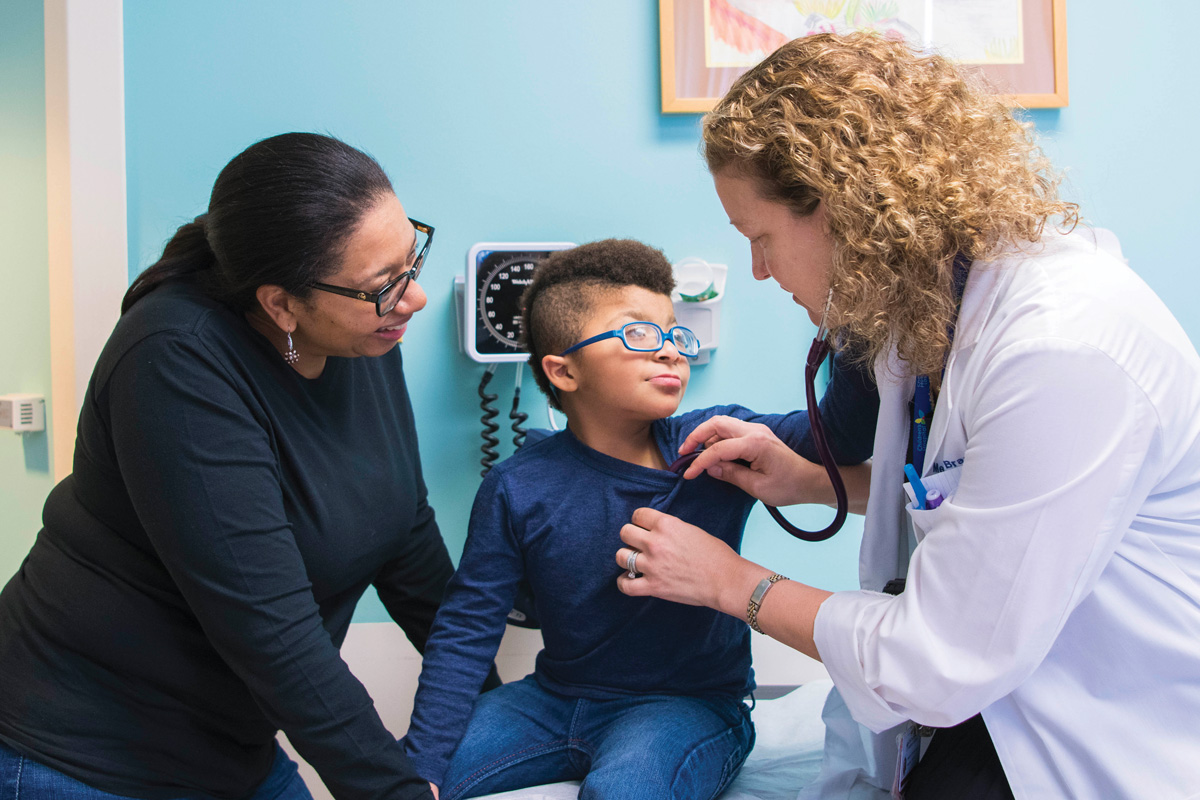 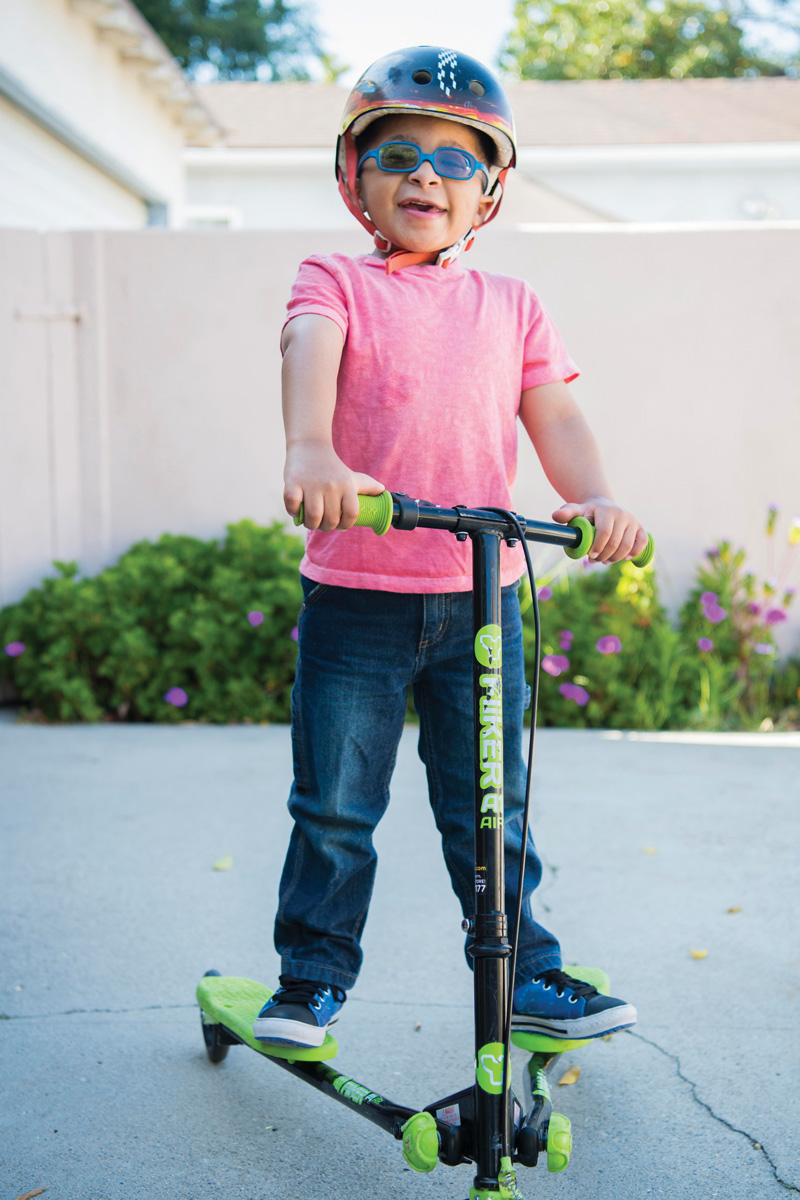 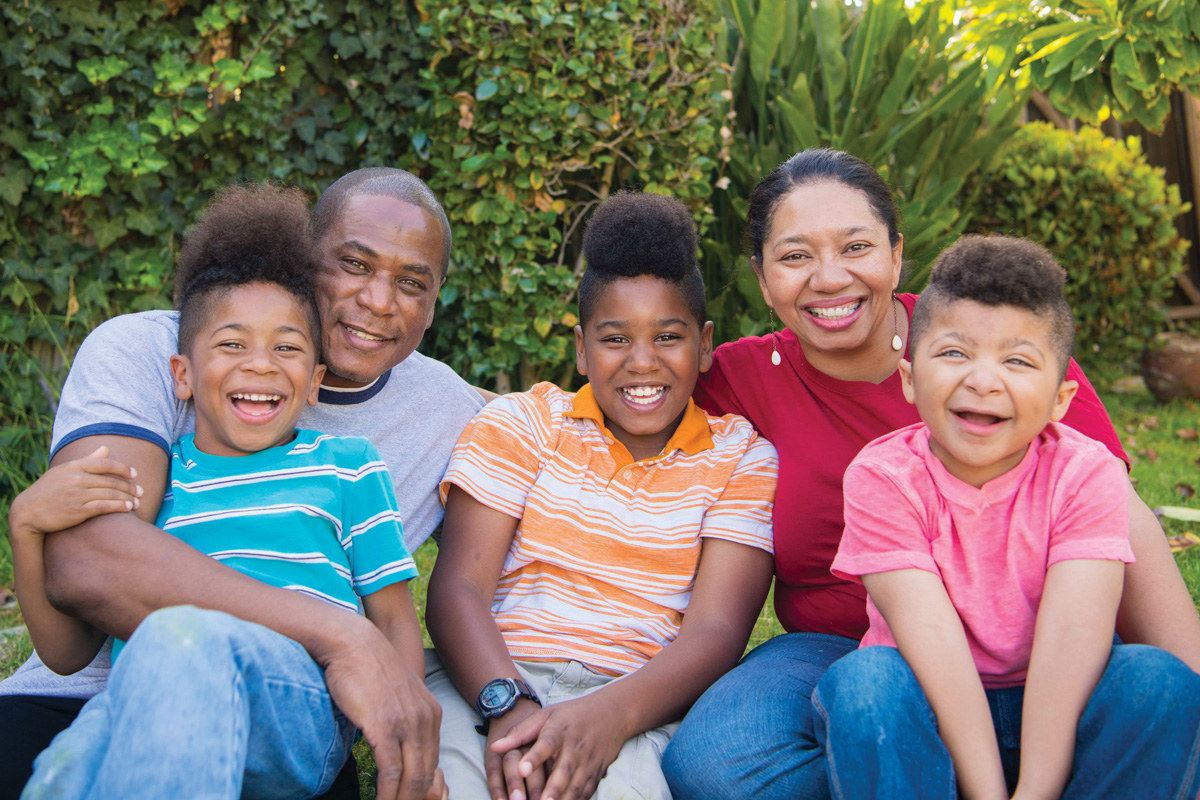 “He’s severely allergic to the world,” says Joy, though she is unperturbed. The family keeps an EpiPen on hand and has cut the main irritant, dairy, from Jordan’s diet. The final pieces fell into place—Bhardwaj says his EoE is in remission.

“The largest impact on Jordan’s life was having a group of people working together, like a ‘pit crew,’ that got him racing back to life and his family,” says Joy. “The Aerodigestive team is a prime example of what health care should be.

“I used to worry every morning I’d wake up if he’d be alive,” says Joy. Oh, how times have changed. Dain shares proudly that Jordan plays baseball now, as well as soccer. He’s doing well at school and loves books and playing with trucks and friends. He is also a daredevil on his Y Fliker scooter—just like other 6-year-olds.

Now Joy and Dain can focus on helping him learn and teaching him to be resilient—and also on being a normal family again. “We can go back to being a family,” says Joy. “That’s what we’re supposed to do.”