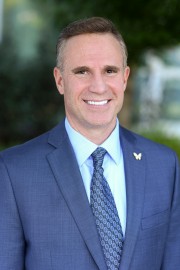 Steve Garske, Ph.D., has provided services as an IT professional for hospitals, clinics and academic medical centers for over 15 years. For nearly 10 years, he has served as Children’s Hospital Los Angeles senior vice president and chief information officer. Steve was previously a part of CHLA’s leadership, from 2006 to 2012, when he oversaw the implementation of all aspects of technology in the Marion & John E. Anderson Pavilion. In his current position, Steve oversees hospital wide information systems and technology, as well as development and implementation of IT related clinical, research and academic goals for the hospital.

Steve served as the chief information officer for Verity Health System, a health care organization with 1,650 inpatient beds in six hospitals in the Los Angeles, San Jose and San Francisco regions. There he developed a three-year strategic plan for information technology, launched the replacement of the existing server infrastructure, created and managed a new cybersecurity team, and oversaw the system’s eight electronic health records systems.

Prior to his post at Verity, Steve spent four years as the chief information officer and chief transformation officer of Kootenai Health in Coeur d’Alene, Idaho, which is comprised of a hospital and 28 health clinics serving patients in northern Idaho, eastern Washington, Montana and the Inland Northwest. There he replaced the technology network, supported clinical integration for remote physicians and successfully attested to Meaningful Use Stages I and II for electronic health records, among other achievements. Steve also created an IT revenue center by monetizing technology services and data, increasing IT revenue from $5k to over $5m within 4 years. In addition, his team was bestowed with the Most Wired Innovators Award (2013), rated as a top IT department in the U.S. by IT Healthcare News (2014), IT Transformational Leader award (2013), and designated as a Most Wired Hospital (2015).

Prior to working at CHLA in 2006, he served as the chief operating officer for Perot Systems and account executive of Computer Sciences Corporation.

Steve holds a bachelor’s degree in applied mathematics, scientific programming from the University of California, San Diego, a master’s degree in business administration (MBA) from Massachusetts Institute of Technology (MIT), a second master’s degree in business information technology from Kingston University in London, and a doctorate in applied management decision sciences and information systems management from Walden University. Steve has served or is currently serving on the boards of the University of Idaho’s College of Engineering, Virtual Pediatric Systems (VPS), Medic Alert Foundation, the Idaho Health Data Exchange, and the North Idaho Health Network.