A REVOLUTION IN GENETICS
By Debra Kain

A child develops a rare form of diabetes, due to the absence of a single piece of DNA in his genetic code. At Children’s Hospital Los Angeles, a dedicated researcher is working to cure this young patient. How? With gene-editing technology called CRISPR-Cas9.

Just a few years old, CRISPR-Cas9 technology is transforming how scientists conduct medical research. Experts believe it can be used to edit the DNA in cells of any living thing. Senta Georgia, PhD, an investigator in the Division of Endocrinology, Diabetes and Metabolism at CHLA, hopes to use it to put the child’s missing piece of DNA back in the proper place and cure his diabetes on a cellular level.

DNA is made up of four chemical bases, pairs of which form the “rungs” of the twisted, ladder-shaped DNA molecule. These four base units are adenine (A), thymine (T), cytosine (C) and guanine (G). All genes are made up of stretches of these four bases, arranged in different order and length. The human genome contains approximately 3 billion of these base pairs.

Every cell in our body carries a copy of our genetic code or blueprint. Like letters in the alphabet form a word, the order of bases in a DNA sequence—A,T,C,G—form genes. RNA then translates these letters into messages that tell the cells how to produce proteins. When the letters are missing or truncated, the result is a mutation in the DNA.

CRISPR-Cas9 gene-editing technology allows scientists to edit a cell by precisely cutting out a specific sequence from among the billions of base pairs in that DNA code, and then repairing the mutation. 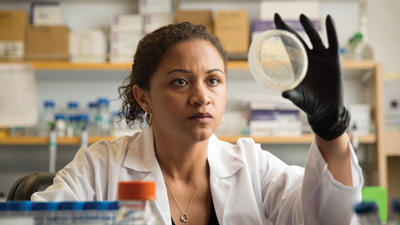 Senta Georgia, PhD, is using CRISPR-Cas9 technology in an effort to cure a child’s rare form of diabetes.

The patient Georgia hopes to cure has three C’s where there should be four. That single deletion caused what is called a “frame-shift mutation,” which alters the way the sequence is read and results in an abnormal protein product.

Georgia discovered that the frame shift created a shortened code for the protein called Neurogenin 3 (Ngn3), which regulates the production of gut and pancreas hormone cells. In this case, the patient was born without the hormonal cells that are necessary for the absorption of food and nutrients in the intestine.

“A lot of people don’t realize that the gut is the largest endocrine, or hormone-releasing, organ in the body,” says Georgia, who is also an assistant professor of Pediatrics at the Keck School of Medicine of the University of Southern California (USC). “So this patient must receive total nutritional supplements to stay alive.”

Georgia is testing whether she can use CRISPR-Cas9 to correct induced pluripotent stem cells (iPSCs)—cells derived from the patient’s own skin cells and reprogrammed back into an embryonic-like state, enabling the development of an unlimited source of any type of human cell. She will then use the corrected iPSCs to make new insulin cells for the patient.

The CRISPR technology will precisely cut out the section of DNA that is missing “C” and replace it with a new DNA segment created in the lab.

The new segment includes the missing molecule along with a copy of the remaining sequence. In the lab, the modified iPSCs are differentiated into insulin cells and then transplanted into mice to see if they can produce blood glucose.

“If this works the way we believe it will, the next step will be to seek funding and likely partner with a company for further testing, with the goal of finding a way to safely and effectively deliver cells that can create and secrete insulin as needed for this patient,” Georgia explains. She adds that this process could also provide proof of principle for treating others with type 1 diabetes by creating new, insulin-producing beta cells.

While Georgia aims to establish CHLA as a center for helping kids with genetic forms of diabetes, Di Tian, MD, PhD, a physician-scientist in the Department of Pathology and Laboratory Medicine, hopes that his core lab will become an important center for generating genetically modified disease models for biomedical research. 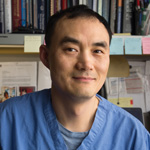 “Using this technology in a research context allows us to determine—in many cases for the first time—the underlying mechanisms for some developmental disorders.”

“What CRISPR technology offers is higher efficiency with a higher success rate at a much lower cost,” says Tian. He is using CRISPR-Cas9 to create several mouse lines to study multiple mutations that possibly cause autism spectrum disorder (ASD).

In just six months, two scientists in his core lab have created 10 lines. “This would have been inconceivable just a few years ago,” he says, adding that without CRISPR he could never, with such efficiency, have been able to study the gene mutations that correlate to—and possibly cause— neurodevelopmental disorders. While at the Massachusetts Institute of Technology (MIT), Tian worked for nearly a year to establish just one mouse line through conventional gene targeting and careful crossbreeding.

Tian, now an assistant professor at the Keck School of Medicine of USC, has been working to zero in on the causal gene or genes responsible for human chromosome 16p11.2 microdeletion syndrome. Chr16p11.2 microdeletion results in the loss of 30 genes of diverse functions and is one of the most common genetic abnormalities associated with ASD.

By systematically targeting each gene in a candidate genomic region one by one, he hopes to use CRISPR to identify the causal genes and molecular mechanism of this unique genetic disorder.

“Using this technology in a research context allows us to determine—in many cases for the first time—the underlying mechanisms for some developmental disorders,” says Tian. “This information will provide clinicians and researchers new opportunities to develop therapies for these disorders and improve the lives of families affected.” 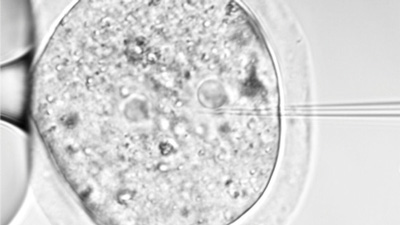 Injecting modified DNA into a cell.

CRISPR was first discovered in the DNA of bacteria in 1987, when scientists noticed a pattern of short, repeating, palindromic (reading the same forward and backward) DNA sequences separated by short, non-repeating “spacer” DNA sequences. Over the next five years, researchers realized that these repeats were present in many other single-celled organisms.

In 2012, scientists coined the term CRISPR, short for “clustered regularly interspaced short palindromic repeats,” to describe the pattern. They figured out that the repeating DNA patterns, along with a family of “Cas” (CRISPR-associated) proteins and specialized RNA molecules, played a role in bacterial immune systems. The entire complex of DNA repeats, Cas proteins and RNA molecules is known as the CRISPR/Cas system.

The spacers were found to enhance the bacteria’s immune system by creating a template of an invading virus that RNA molecules can recognize in the event of future infection. When the RNA  molecule recognizes the foreign DNA, the CRISPR complex is guided to that particular sequence. There the Cas proteins, which act like a pair of specialized molecular scissors, precisely cut and disable the invader.

Also in 2012, scientists figured out how to hijack the bacteria’s immune system to create a new gene-editing tool, building a CRISPR-Cas9 system that could be programmed to identify, cut and even replace any gene sequence.