Using imaging technologies to observe the natural course of biology in action within living organisms will help accelerate the development of new diagnostics and treatments. The Translational Biomedical Imaging Laboratory (TBIL) provides dynamic imaging equipment and technical expertise to accelerate scientific discovery trajectory from bench to bedside and is currently collaborating on studies that include intestinal stem cell propagation, neuroblastoma, and heart regeneration. TBIL is a research accelerator that brings unites clinicians and researchers who are defining the basic mechanisms that build organs to design better therapies.

Bioimaging includes powerful, innovative tools for studying biological processes—such as confocal microscopes that can image virtually any specimen on a slide or culture dish, live-cell imaging, and in-vivo fluorescence imaging. Additionally, confocal laser scanning microscopy allows investigators to acquire in-focus images from selected depths, a process known as optical sectioning. Images are then acquired point by point and reconstructed with a computer, allowing three-dimensional reconstructions of topologically complex structures. All of these methods hold enormous potential for a wide variety of diagnostic and therapeutic applications.

The mission of TBIL is to develop new technologies and provide experimental design advice for the imaging of biological structure and function. To explore varied research topics, TBIL researchers employ advanced imaging tools to follow events as they take place inside an intact organism. Some of these technologies include conventional fluorescence and bioluminescence imaging, laser microscopy (confocal, multiphoton, light-sheet, super-resolution, lifetime, hyperspectral phaser analysis), Optical Coherence Tomography, Computed Tomography (CT), and Magnetic Resonance Imaging (MRI) microscopy. These methods continue to yield unique longitudinal data and insightful tests of proposals made from molecular or cell culture data. As these technologies mature, TBIL makes them available to the CHLA and USC research community members, serving dual, complementary roles as a research center and a user facility.

Please contact Dr. David Koos (dkoos@chla.usc.edu) for more information on how to submit a project proposal to TBIL.

Project Title: Determine the Probability of an Error in Evaluation of Pre-Clinical Treatment due to Variabilities in Tumor Growth Rates.

Researchers employ xenograft mouse models to measure the efficacy of cancer therapeutics. However, there is a dearth of image-guided studies that quantify tumor growth rates within a statistically significant sample size of mice implanted with a single cell line. Pre-clinical studies of novel therapeutics that do not consider variations in individual tumor growth rate can produce misleading treatment results. Tumors do not progress at a uniform rate; our study aims to demonstrate that inherent variability of tumor growth rate can result in misleading interpretation of treatment results from pre-clinical therapeutic trials.

We hypothesize an MRI-guided study will more reliably measure statistically significant differences in tumor volume than bioluminescent data, as MRI is able to account for factors affecting tumor volume such as cell transduction rate and necrotic tumor masses which are difficult or impossible to assess using bioluminescence data. Future research concerning glioblastomas will benefit from this statistical comparison of preclinical imaging strategies.

Comparison of Chest CT Scoring vs. Quantitative CT Measurements in Pediatric Rheumatology Patients with and without Diffuse Lung Disease (DLD) and in Normal Control Pediatric Patients

Diffuse lung disease (DLD) in children with rheumatologic disease represents a heterogeneous group of autoimmune disorders that lead to significant morbidity and mortality. Little is understood about how to best manage these diseases due to lack of effective screening and monitoring tools to evaluate progression of diffuse lung disease. To develop effective monitoring tools to assess progression of diffuse lung disease we have established a 3-site pediatric chest CT bioimaging repository (ClariPACS) to initially evaluate the spectrum of diffuse lung disease in children with rheumatologic diseases. In a retrospective study of 120 cases from this repository, we compare a novel pediatric imaging outcome measure that has been previously validated in adult interstitial lung disease - Computer-Aided Lung Informatics for Pathology Evaluation and Rating (CALIPER) with scoring by 3 pediatric radiologists who have utilized the Pediatric Rheumatologic Diffuse Lung Disease Score (PRDLDS). Once CALIPER has been effectively validated in these cases, we plan to expand our pediatric bioimaging repository and utilize CALIPER and additional deep learning applications for multi-center clinical intervention trials with other CARRA (Childhood Arthritis and Rheumatology Research Alliance) centers.

Retinoblastomas arise in response to biallelic RB1 inactivation (in ~ 98% of cases) and MYCN amplification (in ~ 2 % of cases). Our earlier work suggested that RB1-mutant tumors originate in cone precursors, since RB1 knockdown induced proliferation of these but not other cell types. However, some researchers are concerned with the cone precursor origin idea, since the smallest, earliest tumors appeared to them to be centered in the inner nuclear layer (INL) and not the outer part of the ONL where cones normally reside. We looked at all the reports and infer that most small tumors center in the space between the INL and ONL, called the outer plexiform layer (OPL), but of course the location of the early tumors does not indicate where the cell of origin started. We have now evidence that RB1 knockdown or MYCN overexpression causes cone precursors to relocate from the ONL to the OPL, concurrent with their early proliferation, but the inference is based on static images of retina fixed at various times after transduction with RB1 shRNA or MYCN expression vectors.

We would like to use TBIL imaging capabilities in order to provide a more clear portrait of how these cancers begin, by viewing the movement of transduced cone precursors as they begin to proliferate, using a cone-specific FP reporter to mark cone precursors and another FP to mark lenti-transduced cells.

This USC Zumberge proposal requires a mutualistic team spread out across four USC schools—Dornsife (C. Kenkel, S. Nuzhdin), Viterbi (F. Cutrale), Architecture (A. Gabrielian), KSOM-CHLA (R. Lansford)—comprises imaging scientists, engineers, microbiologists, eco-biologists, and visual artists to develop and use a novel intravital imaging platform. Recent advances in medically driven light-sheet hyperspectral microscopy will be leveraged and focused on investigating marine-based cross-kingdom mutualistic interactions to advance understanding of USC scientists' environmental and energy missions. We will use data acquired with these novel approaches and tools to support several large externally funded grant proposals. Imaging natural and biological phenomena is a significant component of the scientific process. For centuries, humans have created tools and technologies to uncover and understand the complexities that underlie our environment's immediately visible characteristics. The extension of humans' sensory threshold through telescopes, microscopes, cameras, satellites, etc., continues to expand horizons of insight and understanding about our multi-scalar and complex world. While we've become accustomed to the zoomed-out macro-scale perspective of our environments and landscapes, deep dives into the microscopic world of microorganisms that make up our soil and ocean systems have rarely been explored.

Yes, intravital microscopy is a difficult field to enter for most biologists. The cost of advanced microscopy systems may cost over $1M; the expertise to run the sophisticated instruments requires years and decades of experience. Some ambitious scientists might work with an imaging center to acquire, but even most imaging centers are not designed or equipped for issues that arise during intravital imaging experiments. Our transdisciplinary expertise assures unforeseen insights into how diverse organisms adapt to their changing environment.

The assembly and maintenance of specific neuronal connections is essential to the function of neural circuits, including the retina. There is evidence from mouse models that synaptic maintenance at the first synapse of the visual system, between photoreceptors and bipolar cells, becomes deranged in the setting of retinal disease. Using human retinal organoids, experiments will be performed to investigate the assembly, maintenance, and specificity of the rod photoreceptor—rod bipolar cell (RBC) synapse during human retinal development. In collaboration with TBIL, we will determine whether rod-RBC synapse formation and specificity are driven by dynamic exploratory behavior of RBC dendrites in vivo. We hypothesize that active exploratory behavior of RBC dendrites is characteristic of early development and that dendrite motility diminishes as maturation occurs. To test this hypothesis, human iPSC-derived organoids expressing tdTomato fluorescent protein specifically in RBCs will be examined by four-dimensional quantification of RBC dendrite motility, territory (volume), branching order, and Sholl intersections. Live imaging will be performed over 18-hour periods at defined time-points. These studies will determine whether early stages of retinal development display exuberant RBC dendrite motility and thus mimic RBC behavior in disease states.

Diffuse intrinsic pontine glioma (DIPG) is a universally lethal pediatric brain-stem tumor that is difficult to diagnose and treat. DIPG is distinctly specific to children 5-9 years of age with median overall survival of less than one year after diagnosis. Capturing the biological behavior of DIPG in its precariously inaccessible locale of the pons in animal models has hampered the investigation of therapeutic agents for use in pediatric patients. The proposed project optimizes a transparent and reproducible in-vitro 3D microfluidic platform for use as preclinical tumor host model capable of faithfully reproducing the tumor and it microenvironment. This innovative 3D microfluidic platform allows for direct observation and careful manipulation of the tumor-stromal interactions and therapeutic intervention utilizing optical imaging in real time, setting the stage for the rapid optimizations of therapeutic response. An investment in miniaturization, throughput, reproducibility, and robust quantitative drug response parameters, will allow immediate acceptance of this platform by academia, pharmaceutical industry, and clinicians for research in other immedicable cancers. The proposed platform upon validation is expected to significantly reduce use of animals and stressful invasive surgical procedures in preclinical drug testing with potential to assist in the evaluation of tumor-immune interactions and prediction of patient response to anti-cancer therapy.

“Roses are red, violets are blue, without your lungs your blood would be too!”- A pulmonologist’s valentine. Susan Ott NEJM, 1981 The principal function of the lung is the uptake of oxygen from air and the elimination of carbon dioxide from blood. The thin gas diffusion surface of the lung juxtaposing air to a blood capillary network across a thin membrane was first imaged in the frog by Malpighi in the 17th century. Since then advancing understanding of how the lung forms and functions has depended on improved imaging technology. Over the past decade TBIL has devised several new visualization technologies that allow more and more detailed views of the gas diffusion surface of the lung as well as of its supporting structures, including its capillary networks as well as its interstitial matrices. Lung diseases including those associated with the recent COVID pandemic can cause lethal failure of gas exchange. TBIL is engaged in devising improved imaging methods to interrogate early lung development, to find out how the lung grows during childhood and adolescence, as well as what happens in childhood interstitial lung diseases. 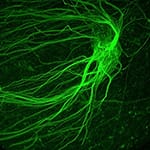 This image shows the right lateral M72 glomerulus on the olfactory bulb of a M72-IRES-tauGFP transgenic mouse at postnatal day 13. In this transgenic mouse strain, all olfactory sensory neurons that express the M72 olfactory receptor also express a tauGFP fusion protein. The tauGFP brightly labels M72 expressing neurons and their axons and allows for microscopic visualization of the convergence of the M72 axons into specific glomeruli where these axons form synaptic connections with the cognate second order neurons in the olfactory bulb.

The 2D image presented here is a maximum intensity projection of a stack of 131 optical sections collected in 1.0-micron steps and represents a 3D volume with the dimensions of 256 microns across and 130 microns deep. 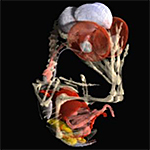 Fantastic Voyage to the Lung

Using newly optimized visualization technology at TBIL, researchers can now perform a ‘virtual bronchoscopy’ that begins in the bronchus and allows them to peer into the alveolus. In a collaboration led by David Warburton, MD, researchers are seeking to radically transform our understanding of the formation of the gas exchange surface in the human lung, find new approaches to the care of premature infants, and develop a better understanding of the numerous childhood- and adult-onset lung diseases. The research team was awarded $4 million by the NIH (2014) to map the developing lung.

New Ways of Seeing the Pattern