The Molecular Pathogenesis Research lab studies the pathogenic mechanisms involved in the onset of meningitis in neonates caused by Escherichia coli K1, Group B Streptococcus and Listeria monocytogenes. In addition, our lab is also studying the critical steps involved in the onset of Cronoboacter sp. induced necrotizing enterocolitis and meningitis; and Acinetobacter baumanii-induced lung infections. The following projects are being pursued currently:

Our studies demonstrated that E. coli K1 that expresses outer membrane protein A (OmpA) interacts with Ecgp96, a receptor specifically expressed on HBMEC for invasion.  OmpA+ E. coli interaction with Ecgp96 also elevates iNOS expression and NO production, which in turn enhances the generation of cGMP, an important downstream target of NO. The increased cGMP levels enhance the bacterial invasion due to augmented expression of Ecgp96 in HBMEC and concomitantly increased the permeability of HBMEC monolayer.  An intriguing aspect of these studies is that Ecgp96 interacts with TLR2 at the surface of HBMEC and the C-terminal domains of these two molecules interact for inducing signaling events for invasion of the bacteria.

Further studies have unraveled some of the complex mechanisms that aid bacterial invasion in HBMEC. Our current studies have revealed that tight junction disruption, nitric oxide (NO) production and actin condensation are critical for invasion, although the bacteria do not invade the brain via the tight junctions but rather employs a transcellular entry into the brain via caveolae. Recent studies have demonstrated that IQGAP1, an actin-associated protein that plays an important role in tumor progression, actively controls tight junction disruption, nitric oxide (NO) production and actin condensation and plays a central role in bacterial invasion. E. coli K1 also increases biopterin production by stimulating GCH1, a rate limiting enzyme involved in biopterin synthesis. Of note, the interaction of GCH1 with Ecgp96 is critical for increased production of NO.

In bacterial infections, immune cells play an important role in killing bacteria and clearance of infection. Contrary to the existing paradigm, our studies showed that neutrophils and macrophages play a detrimental role in E. coli K1 meningitis by providing a niche where bacteria can hide and multiply. E. coli K1 utilizes FcRI (CD64) on macrophages and gp96 on neutrophils to enter and survive inside these potent immune cells. This plays a role in achieving the high levels of bacteremia required for crossing the blood brain barrier and resultant meningitis by E. coli K1. Currently we are deciphering the role of FcRI glycosylation sites in the ability of this pathogen to survive inside the cells. We are also determining the effect of E. coli K1 infection in phagosome maturation and elucidating the signaling pathway leading to the survival of bacteria inside macrophages.

Serum bactericidal activity mediated by complement is the first line of defense against pathogenic microorganisms. Our studies demonstrated that OmpA of E. coli K1 interacts with the   -chain of C4bp, which is composed of eight homologous complement control protein (CCP) modules. E. coli K1 binding assays utilizing recombinant C4bp mutants that lack various CCP domains suggest that CCP3 is the major site of interaction with OmpA. Mutation analysis of both OmpA and C4bp followed by studying their interaction revealed that three amino acids of OmpA are critical for binding to C4bp.  Our studies also demonstrated that lack of certain threshold levels of C4bp increases the risk of E. coli K1-induced meningitis.  Therefore, C4bp may be a diagnostic marker for assessing the risk factors of newborn infants for E. coli infections. 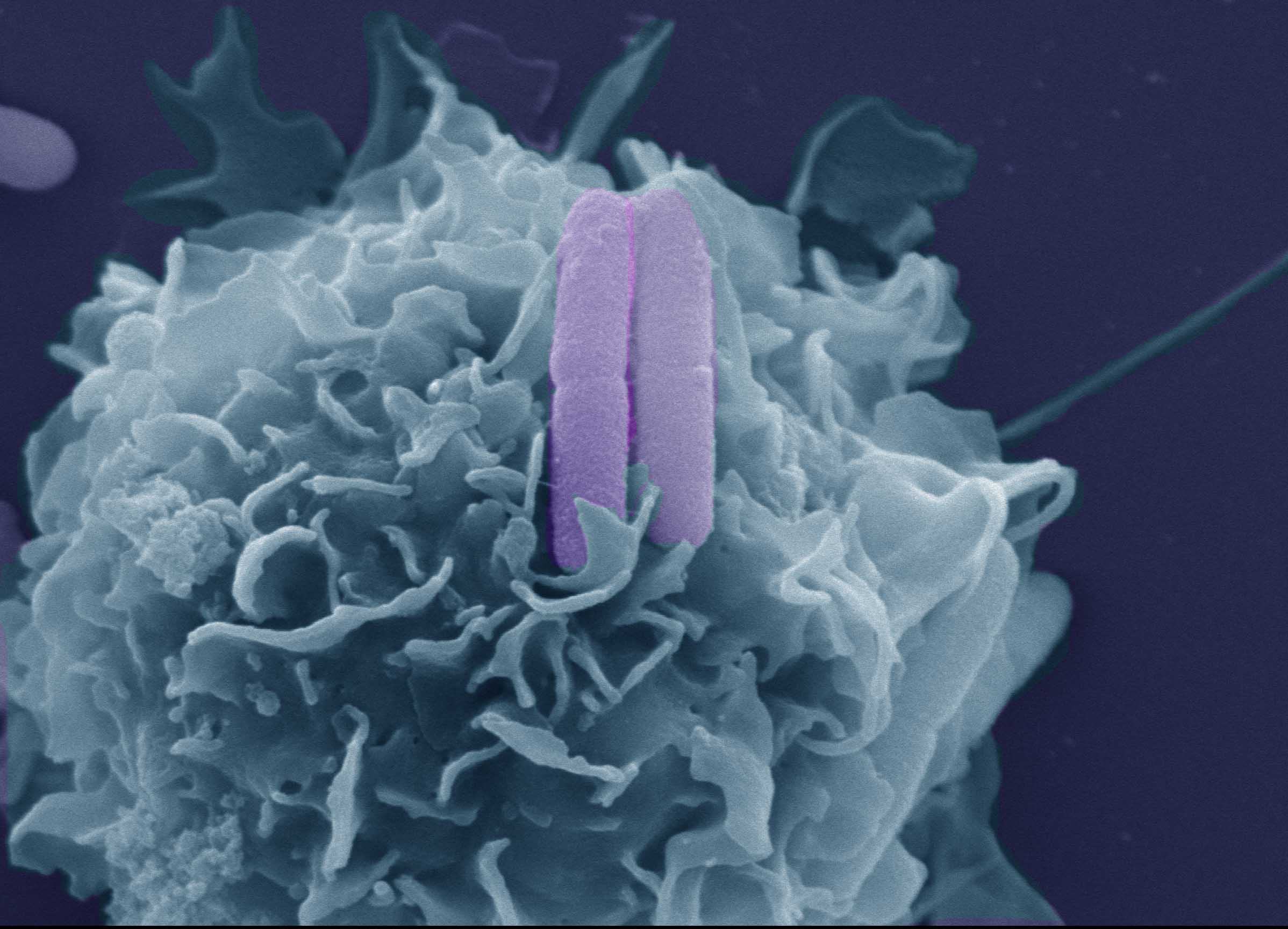 Micro-CT analysis of the brains of mice infected with E. coli K1 revealed similar brain pathology to E. coli K1-infected human neonates, indicating that our mouse model mimics human disease. In this model, we have demonstrated that administration of one dose of small quantities of interleukin-10 (IL-10) prevented the onset of meningitis and repaired the damage that had occurred to the brain.   Our studies also showed that lack of iNOS expression is protective against E. coli–induced meningitis, and treating the animals with iNOS inhibitor completely prevented E. coli–induced brain damage by enhancing the killing of bacteria by macrophages and reducing the pathogen load. Currently we are utilizing this mouse model to determine the efficacy of small molecule inhibitors and developing vaccine strategies to prevent E. coli K1 meningitis.

6. Screening of small molecule inhibitors to Ecgp96 for prevention of neonatal meningitis.

NIH clinical data collection and in silico docking were applied as lead identification sources. Compounds that prevent E. coli K1 binding have been selected from the primary screening and further evaluated for pharmacological efficacy.  Some of these compounds have been modified chemically to increase the efficacy.  Four small molecule inhibitors have been identified and we are presently generating a chemical library of these compounds to eliminate cytotoxicity, while improving the half-life and specificity.

7. Interaction of Cronobacter sakazakii with intestinal epithelial cells in culture and in a mouse model.

Cronobacter sakazakii (CS), formerly known as Enterobacter sakazakii, is an emerging opportunistic human pathogen and the etiological agent of life-threatening bacterial infections. This pathogen has a propensity to cause bacteremia, meningitis, and necrotizing enterocolitis associated with high mortality and morbidity rates. The survivors often suffer from serious neurological sequelae including brain abscess and impaired sight and hearing. Since environment can be a potential source for transmittance of CS, we compared the ability of CS strains isolated from human and environmental sources for their binding abilities and to cause apoptosis in intestinal epithelial cells. Our studies revealed human strains of CS have a selective advantage over environmental strains, which enable these strains to bind to the enterocytes and cause infection. A compelling observation of our studies is that CS binds to TGFβRI in epithelial cells and cause subsequent barrier dysfunction and ultimately necrosis of cells.  Suppression of TGFβRII exclusively in intestinal epithelial cells prevented CS-induced NEC in newborn mice. 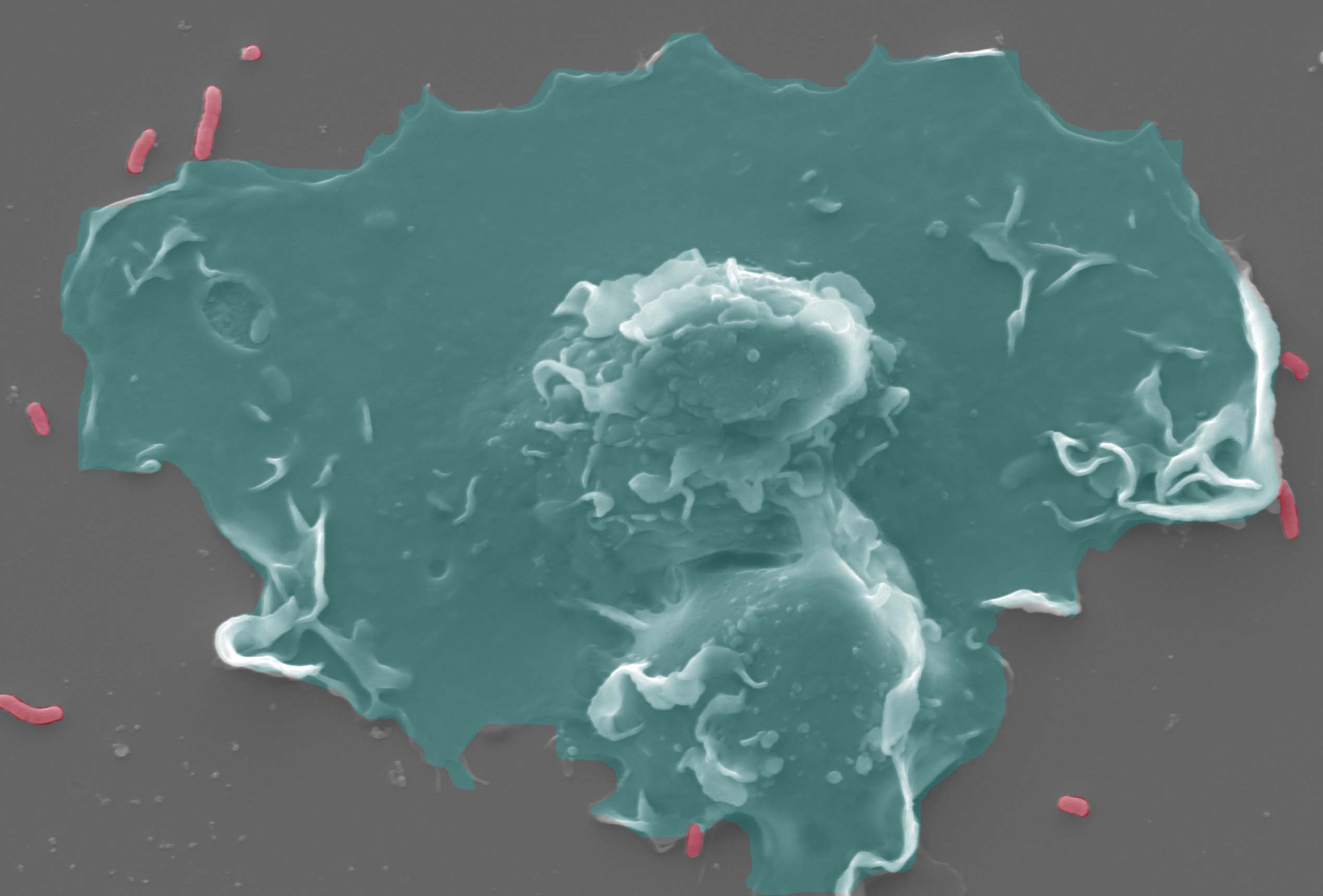 Despite the fundamental function of dendritic cells, neutrophils and macrophages in innate immunity, the role of these immune cells in CS-induced infection is not known. Our studies demonstrated that C. sakazakii interaction with monocyte-derived DCs renders the cells more tolerogenic by increasing the production of TGFβ and IL-10. We further demonstrated that C. sakazakii interacts with DC-SIGN, present on DCs, to enter and subsequently suppress the maturation of DCs. Using an in vitro and an in vivo mouse model of NEC, we demonstrate that the robust recruitment of DCs in the lamina propria (LP) of intestine enhances epithelial cell injury upon infection with OmpA+ C. sakazakii. TGF-β production by DCs infected with OmpA+ C. sakazakii promotes increased expression of iNOS from the epithelial cells and thereby enhances apoptosis and barrier dysfunction. In agreement with these studies, depletion of DCs in newborn mice protects the animals from OmpA+ C. sakazakii-induced NEC, whereas adoptive transfer of DCs to DC depleted mice restores the susceptibility to C. sakazakii infection. We also demonstrated that the presence and recruitment of PMNs and macrophages to the lamina propria (LP) is important for clearance of the bacteria during the initial stages of infection. Furthermore, their absence exacerbates mucosal injury by increasing the levels of proinflammatory cytokines and iNOS expression.