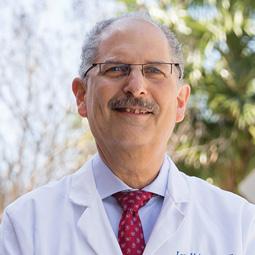 Lee J. Helman received his M.D. from the University of Maryland School of Medicine magna cum laude in 1980 and was elected to Alpha Omega Alpha. He completed his internship and residency in Internal Medicine at Barnes Hospital Washington University also serving as Chief Resident. Dr. Helman began his fellowship training at the National Cancer Institute (NCI) in 1983. He did his post-doctoral training in the Molecular Genetics Section, Pediatric Branch, NCI, and became Head of the Molecular Oncology Section, Pediatric Oncology Branch, NCI, in 1993. He served as Chief of the Pediatric Oncology Branch from 1997-2007, and served as Scientific Director for Clinical Research in the Center for Cancer Research, National Cancer Institute from 2007 to 2016. He joined CHLA and the University of Southern California (USC) on March 12, 2017 as the Section Head of Basic and Translational Research within the Cancer and Blood Disease Institute (CBDI) and the Division of Hematology, Oncology and Blood and Marrow Transplantation. He also serves as Director of the Cancer and Blood Diseases Research Program at The Saban Research Institute. In addition, Dr. Helman is a Professor of Pediatrics and Medicine at the Keck School of Medicine of USC and a member of the Sarcoma Program and executive leadership team at the USC Norris Comprehensive Cancer Center.

He was elected to the American Society for Clinical Investigation and the American Association of Physicians and is a founding member and past president of the Connective Tissue Oncology Society. Dr. Helman is the past Chairman of the Board of Directors and is currently a member of the Board of Directors of and is a Clinical Advisor to The Children’s Inn at NIH and is a past member of the Board of Governors of the Clinical Center at NIH. Dr. Helman is a past member of the Board of Directors of the American Society of Clinical Oncology (ASCO) and a past chair for its Bylaws Committee. He received the 2011 ASCO Pediatric Oncology Award and is a Fellow of ASCO. He has served on the Science Education, Publications, and Clinical & Translational Research committees of the American Association for Cancer Research (AACR), and was the inaugural chair of its Pediatric Oncology Task Force and has been on the Scientific Program Committee for several of its annual meetings. He serves on the Scientific Advisory Committee of Stand Up To Cancer, a scientific partner to the AACR. In the fall of 2017, Dr. Helman was appointed director of the Osteosarcoma Institute - and organization created by the What Would Willie Want (QuadW) Foundation.

Dr. Helman's laboratory currently studies the biology and treatment of rhabdomyosarcoma, Ewing's sarcoma, osteosarcoma, and pediatric GIST tumors. Major areas of research include the study of the pathophysiologic consequences of IGF signaling; identification of the molecular/biochemical determinants of the biology of these sarcomas; and the application of functional genomics to develop novel clinical studies for these sarcomas.

Biology and treatment of adult and pediatric sarcomas

This paper was the first to demonstrate that IGFII is highly expressed in rhabdomyosarcoma tumors. It also demonstrated the functional activity of IGFII as an autocrine growth factor in these tumors. These findings provided the foundation for studies of the role of IGFII in many embryonal tumors and ultimately led to studies of IGF-1 receptor blockade in rhabdomyosarcoma and other tumors. These trials have shown that this approach has some activity. Studies of combination therapies using this approach are ongoing.

This paper showed that rhabdomyosarcoma tumors re-express the normally imprinted maternal allele of IGFII, known as loss of imprinting (LOI). Loss of heterozygosity (LOH) at the IGFII locus with duplication of the paternal allele, known as paternal disomy, had been previously demonstrated in this tumor, and this finding strongly suggested that LOI was functionally equivalent to LOH and paternal disomy, with both LOI and LOH leading to expression from 2 copies of the IGFII allele in tumors where normal tissues express IGFII from a single allele due to imprinting. These data were the first to suggest that both LOH and LOI can lead to the same biological effect. This study also provided evidence for activation of the IGF pathway in rhabdomyosarcoma through an epigenetic mechanism.

This paper was a follow-up to a previous publication where we used expression profiling to identify markers of metastatic potential in mouse models of metastatic osteosarcoma. This paper evaluated the role of one such marker we identified, ezrin. Ezrin is a protein that links the plasma membrane to the cytoskeleton, so it made biological sense that it could be involved in metastatic behavior. We were able to demonstrate that high ezrin expression enhanced survival of osteosarcoma cells that colonized the lung. We also showed that high ezrin expression in spontaneously arising osteosarcoma in both dogs and humans portended a worse prognosis. This paper led to many additional studies evaluating the role of ezrin in metastases and was the first demonstration of a marker of metastatic potential in human osteosarcoma.

This paper summarized the clinical and molecular data from over 100 patients with pediatric and “wild-type” GIST after 8 years of studying these rare tumors in a clinic that I established in 2008. We have established 3 distinct groups of these patients, the vast majority having SDH loss as the driving alteration leading to GIST development. Each of the 3 groups has distinct findings with implications for prognosis and management strategies. This work serves as a foundation for further study by us and by others in the field.

This paper demonstrates the ability of a novel drug conjugate, namely SN-38 linked to a weak HSP-90 inhibitor to enhance the effectiveness the Topo-1 inhibitor, SN-38 in pediatric sarcomas. We further demonstrate the mechanism is related to the ability to the HSP-90 inhibitor to deliver the active SN-38 directly into tumors both in vitro and in vivo. This study contributed directly to an ongoing Phase I/II study of this compound.

I began studying IGF signaling back in the 1990s when I found that IGFII was over- expressed in rhabdomyosarcomas (RMS) compared to normal skeletal muscle, and then studied the role of IGFII in normal skeletal muscle development and in the pathogenesis of rhabdomyosarcoma. I have continued to study the role of IGF signaling in a variety of pediatric sarcomas and used these insights in clinical studies of human IGF1R antibodies. My laboratory now studies mechanisms of resistance to IGF1R blockade and also pursues functional genomics and matrix drug screening to identify new targets for the treatment pediatric sarcomas.

We also identified SRC-Family kinase (SFK) activation in RMS tumors, specifically YES, and showed that this pathway is rapidly upregulated upon IGFIR blockade. Subsequent studies have indicated synergy between IGFIR blockade and SFK inhibition, and these observations have led to a Phase I/II study of the combination of IGFIR antibody plus dasatinib in recurrent RMS.

Based on our finding of YES activation in RMS, we also have been studying the role of YES Association Protein 1 (YAP1) in RMS. YAP1 is known to be regulated by the Hippo pathway, but we have focused on interactions between YES and YAP1 and the regulation of that interaction in RMS.

The lab has also begun to study metabolic alterations in pediatric sarcomas, focusing our attention primarily on Ewing’s sarcoma (ES). We have identified alterations in glutamine and serine metabolism and are pursing further studies to understand the mechanism of these observed alterations.

I have also developed an interest in pediatric GIST tumors that lack the KIT or PDGFRA mutations (as is common in adult GIST tumors) and have, with others, identified SDH mutations as the driver in these tumors. We recently published results of a large series of these rare GIST patients, dividing them into categories with implications for treatment and prognosis.

I have spent the previous 33 years as a NCI intramurally funded scientist. I currently use a start-up package for funding and receive continued funding support from both Foundations and NIH.