LOS ANGELES (June 18, 2015)--Investigators at Children’s Hospital Los Angeles are providing new hope for babies with short bowel syndrome (SBS) by developing a novel model of SBS in zebrafish, described in a paper published online on June 18 by the American Journal of Physiology-Gastrointestinal and Liver Physiology. 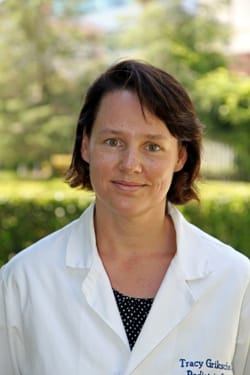 SBS is a highly morbid disease where the small intestine is either shortened or non-functional, leaving the patient with the inability to absorb enough nutrients from food. This results in profound malnutrition, dehydration, and can be fatal.

Some patients increase their ability to absorb nutrition through their shorter intestine through a process called adaptation, which is not well understood. The CHLA group is the first to model adaptation in an innovative way that markedly shortens the time to study the condition and the costs of these experiments.

“The new solution from our lab is to study the intestines in small fish that could fit onto a dime,” explained principal investigator Tracy C. Grikscheit, MD, of The Saban Research Institute of Children’s Hospital Los Angeles. “Even though the fish are tiny, under a microscope, we are able to perform the same surgery that is performed on children with short bowel syndrome. And even better, we have pioneered a way to show the resulting changes in the anatomy through three dimensional imaging of the fish, with higher resolution than some scans available to human patients.”

The researchers can “fly” through these tiny fish in three dimensions, and watch the changes in their intestines in order to better understand what is happening for human patients, enabling them to better understand the problem and identify potential solutions. A sample of the three-dimensional imaging video is available here: https://youtu.be/NF-bRwPNjuY

“The three-dimensional reconstructions of these fish shown in our publication make it clear that the changes in the fish intestine after this surgery are just like those seen in the babies we care for,” said Grikscheit, who is also an associate professor of surgery at the Keck School of Medicine of the University of Southern California  “As a pediatric surgeon, my lab has only one goal: to find better options for children with short bowel syndrome.”

Operating on zebrafish may seem like an unlikely decision, but they are increasingly being studied by investigators who are interested in stem and progenitor cells because these cells have a high capacity for regeneration and have many similarities to humans.  The investigators proved that the model of short bowel syndrome in zebrafish resulted in adaptation of the intestine, and a marked increase in progenitor cells two weeks after surgery.  In addition, the investigators could dose the fish with drugs to investigate the mechanism of adaptation just by dropping the compounds in the tank water—a significantly easier and less expensive approach than in other models.

Marked adaptation was documented in the fish, and this advance has now opened up a wide range of possible studies in which the cells that proliferate rapidly, as well as the signaling pathways that promote adaptation, can be identified.  The hope is that these data can lead to better care for babies who suffer from intestinal failure.

“We and others have struggled to understand adaptation in order to improve our patients’ lives. Because we can only look at tissue from humans at various times when they need surgery, and other models are very expensive and difficult, this is a solid advance that we expect to propel us to a new understanding of a process that is so important to our babies with inadequate intestine,” said first author Kathy Schall, MD, of Children’s Hospital Los Angeles.