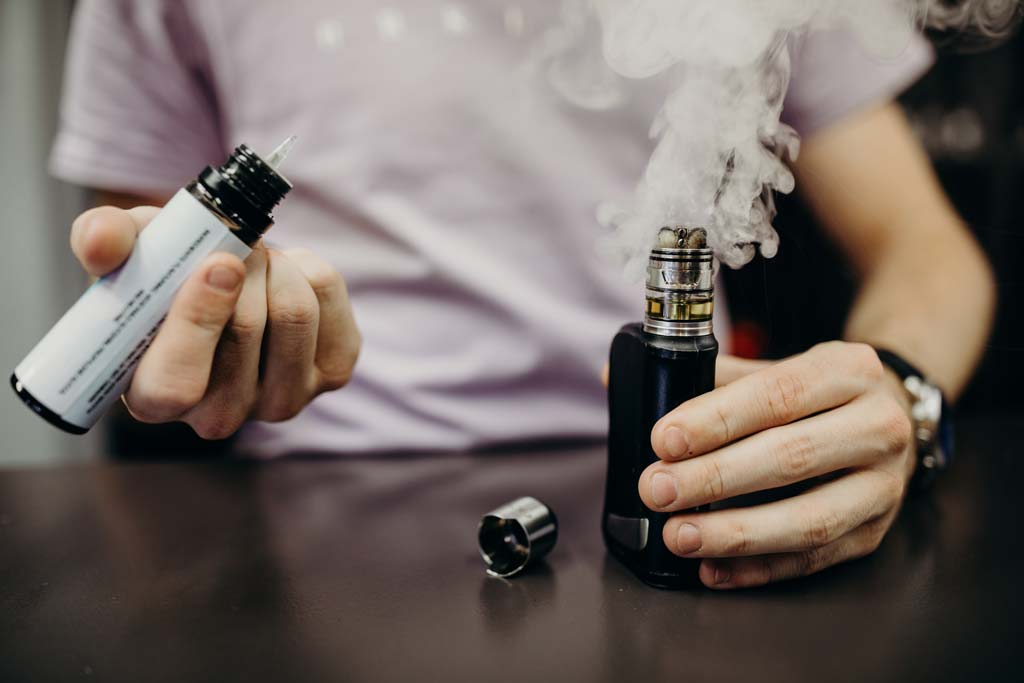 Children’s Hospital Los Angeles researchers zero in on the consequences of vaping and secondary exposure to e-cigarettes.

LOS ANGELES (Oct. 23, 2020) — Adolescent use of e-cigarettes and vaping products is at epidemic proportions, yet the adverse health effects are understudied, with almost no data on younger patients. The problem is sizable as children start vaping at a younger and younger age. Recent estimates show that 9.6 percent of eighth graders vape nicotine or THC (tetrahydrocannabinol, the main active ingredient of cannabis), along with 19.9 percent of 10th graders and 25.5 percent of 12th graders. Many young people vape daily.

Secondary exposure to traditional combustible cigarettes has well-established side effects, including respiratory illness, prematurity and lower quality of life. Far less is known about secondary exposure to vaping, though a majority of studies conclude it poses health risks.

A team of researchers, led by Robinder Khemani, MD, MSci, Associate Director of Research for the Department of Anesthesiology Critical Care Medicine at The Saban Research Institute of Children’s Hospital Los Angeles, is determined to develop new evidence of vaping’s health effects on adolescents. Dr. Khemani recently received a $500,000 grant from the National Heart, Lung and Blood Institute (NHLBI) to study the long-term health effects of vaping and secondary exposure to electronic cigarettes on children and teens.

His team is focused on studying a new condition the Centers for Disease Control and Prevention (CDC) calls EVALI, for “e-cigarette or vaping product use-associated lung injury.” The illness was first recognized by the CDC in the summer of 2019 when cases of sudden, severe, sometimes fatal lung infections began emerging, often in otherwise healthy individuals.

As of December 2019, 2,409 hospitalizations had been logged in the United States for EVALI, with 52 deaths. Sixteen percent of cases involved patients under the age of 18. Doctors have found at least one commonality among the patients—recent use of e-cigarettes or vaping products.

Dr. Khemani’s NHLBI-funded study is an extension of a Phase II clinical trial he is leading—REDvent (“Real-time Effort Driven VENTilator)—which is testing a new way to manage patients on ventilators. The novel computer-based approach is designed to preserve respiratory muscle strength and reduce a patient’s time on mechanical ventilation.

About 90 percent of trial participants, who range in age from 1 month to 18 years, have had pediatric acute respiratory distress syndrome (PARDS), a rapidly progressing disease that causes fluid to leak into the lungs, making it difficult to breathe.

The e-cigarette study is concentrating on children who come to the ICU with PARDS, which is typically triggered by an infection in children, and is asking if the lung injury experienced from vaping is similar to lung injury resulting from other PARDS triggers.

One of the study’s unique aspects is its examination of secondary exposure to vaping’s effects and whether this increases a child’s susceptibility to more severe lung injury when they get PARDS from other causes or if it makes their recovery from PARDS more difficult.

The study will compare clinical data between adolescents with EVALI and those with PARDS from other causes. Dr. Khemani’s team also wants to find out whether exposure of any kind to e-cigarettes influences illness severity and clinical outcomes when children develop PARDS.

“Parents often vape indoors or in enclosed spaces such as cars, without thinking they are exposing their children to potential toxins,” says Dr. Khemani.

In total, he expects to follow about 350 children and teens. “We hope to debunk the myth that vaping is benign,” he says.

Founded in 1901, Children's Hospital Los Angeles is the highest-ranked children’s hospital in California and fifth in the nation on the prestigious U.S. News & World Report Honor Roll of Best Children’s Hospitals. U.S. News ranks Children’s Hospital Los Angeles in all 10 specialty categories. Clinical care at the hospital is led by physicians who are faculty members of the Keck School of Medicine of USC through an affiliation dating from 1932. The hospital also operates the largest pediatric residency training program at a freestanding children’s hospital in the Western United States. The Saban Research Institute of Children’s Hospital Los Angeles is home to all basic, translational, clinical and community research conducted at the hospital, allowing proven discoveries to quickly reach patients. Our mission: to create hope and build healthier futures. To learn more, follow us on Facebook, Instagram, LinkedIn, YouTube and Twitter, and visit our blog atCHLA.org/blog.