LOS ANGELES (June 29, 2015)--Many hospitals lack the resources and patient volume to employ a round-the-clock, neonatal intensive care specialist to treat their youngest and sickest patients. Telemedicine—with real-time audio and video communication between a neonatal intensive care specialist and a patient—can provide access to this level of care. 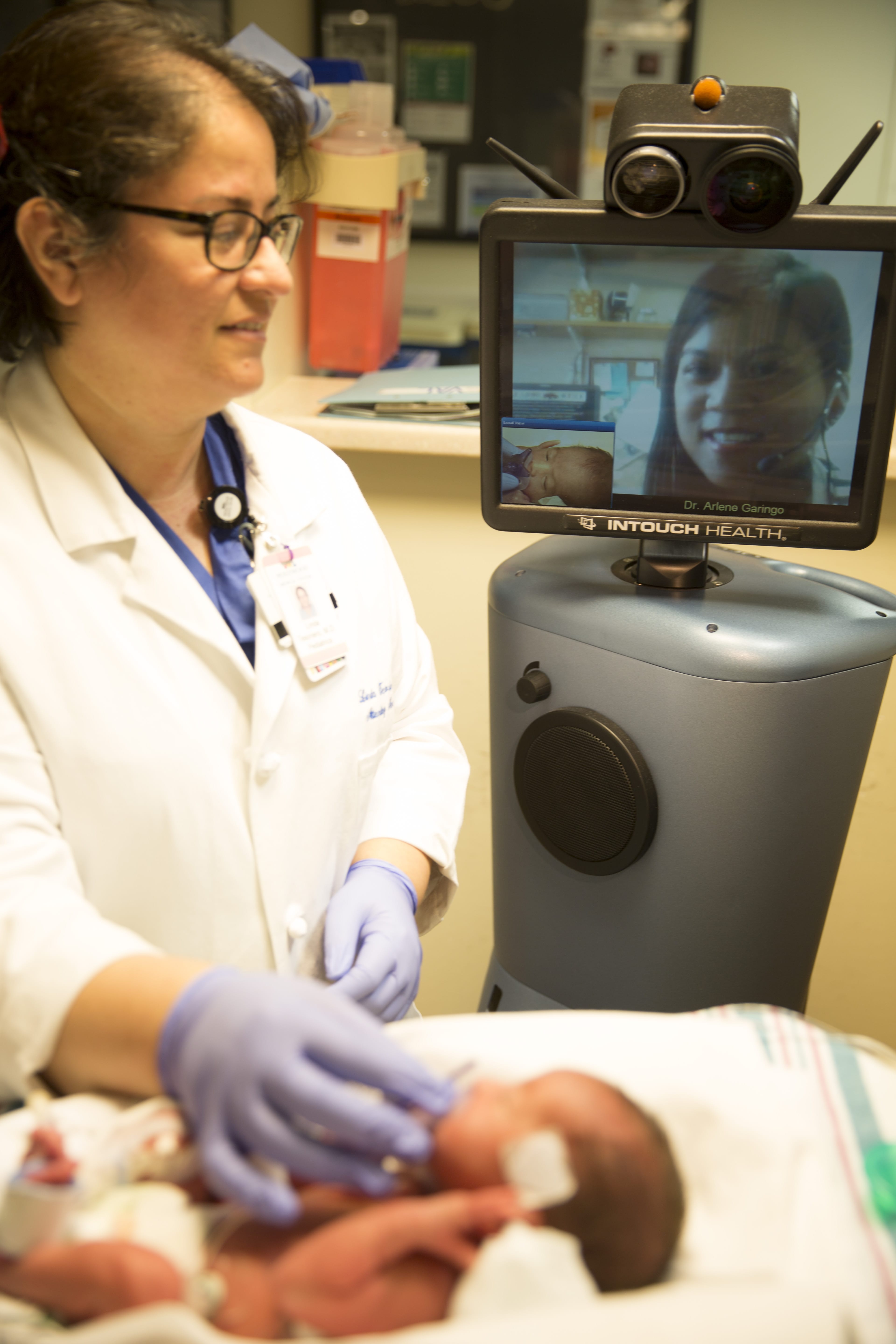 A team of neonatologists at Children’s Hospital Los Angeles investigated the use of robot-assisted telemedicine in performing bedside rounds and directing daily care for infants with mild-to-moderate disease. They found no significant differences in patient outcomes when telemedicine was used and noted a high level of parent satisfaction. This is the first published report of using telemedicine for patient rounds in a neonatal intensive care unit (NICU). Results will be published online first on June 29 in the Journal of Telemedicine and Telecare.

“We wanted to determine if robot-assisted telemedicine could be part of daily clinical practice in order to provide care by a neonatologist where one might otherwise not be present—in remote locations, underserved communities and at times of limited staffing,” said Arlene Garingo, MD, neonatologist at CHLA and first author on the study. In an earlier study, the team at CHLA demonstrated the feasibility, safety and accuracy of robot-assisted telemedicine in the NICU.

In this randomized study, infants were treated by either an onsite neonatologist who visited the baby at the bedside during patient rounds, or by an offsite neonatologist who performed daily evaluations of the patient using robot-assisted telemedicine. Twenty pairs of patients were matched by age, weight, diagnosis and disease severity, with one infant from the pair assigned to each treatment group.

There were no differences in average length of stay, age at discharge or hospital charges between the two treatment groups. Nutritional needs, respiratory support, days on antibiotics, phototherapy and number of radiological studies were also the same between the two groups.

“However, there was a significant difference in time spent at the bedside, with the remote neonatologist requiring nearly twice as much time to care for the patient,” said Philippe Friedlich, MD, MEpi, MBA, chief of Neonatology at CHLA and an author on the study. He explained the additional time was largely due to time required to maneuver the robot, as well as issues of internet connectivity.

At the time of discharge, 45% of families completed a survey about their experience. All responded that they were comfortable having their baby treated by an offsite neonatologist via telemedicine and would be comfortable doing it again.

Additional contributors include: Thomas Chavez, Linda Tesoriero, MD, Shilpa Patil, MD, and Paige Jackson, MD, Division of Neonatology and the Center for Fetal and Neonatal Medicine at Children’s Hospital Los Angeles; and Istvan Seri, MD, PhD, who was located at CHLA during the study and is now at the Center of Excellence in Neonatology, Saidra Medical and Research Center, Qatar.

About Children’s Hospital Los Angeles
Children's Hospital Los Angeles has been named the best children’s hospital in California and among the top 10 in the nation for clinical excellence with its selection to the prestigious U.S. News & World Report Honor Roll. Children’s Hospital is home to The Saban Research Institute, one of the largest and most productive pediatric research facilities in the United States. Children’s Hospital is also one of America's premier teaching hospitals through its affiliation since 1932 with the Keck School of Medicine of the University of Southern California. For more information, visit CHLA.org. Follow us on Twitter, Facebook, YouTube and LinkedIn, or visit our blog at http://researchlablog.org/.