An interdisciplinary research team at The Saban Research Institute of Children’s Hospital Los Angeles has found that body mass index (BMI) is an inadequate method for estimating changes in body fat and obesity in children with leukemia. Investigators determined that the discrepancy between BMI and body composition was due to increases in body fat with simultaneous loss of lean muscle mass during treatment. The study will be published online first in the journal Leukemia & Lymphoma.

Acute lymphoblastic leukemia (ALL) is the most common cancer of childhood. In previous work done at CHLA, investigators reported that obese children diagnosed with high-risk ALL had a 50% greater risk of their disease recurring compared with children who were not obese. 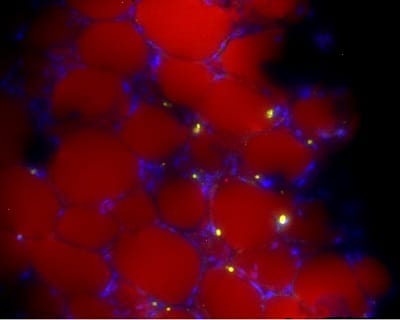 “In my lab we’ve seen a direct interaction between fat cells and leukemia cells that may help explain this increased risk of disease relapse,” said Steven Mittelman, MD, PhD, director of the Diabetes and Obesity program at CHLA and senior author on the study. “It appears that the fat cells “protect” leukemia cells, making them less susceptible to chemotherapy – and making an accurate measure of body fat essential.” Mittelman is also an associate professor of Pediatrics and Physiology and Biophysics at the Keck School of Medicine of USC.

Typically, BMI is used to estimate body fat and determine obesity. Since BMI is calculated from height and weight measurements, it does not differentiate between fat and muscle tissue. So increases in body fat with concurrent loss of lean muscle could result in an unchanged BMI, and an inaccurate estimation of body composition.

To determine if BMI accurately reflects body fat in this population, 50 patients, predominantly Hispanic between the ages of 10 to 21 years with newly diagnosed high-risk B-precursor ALL or T-cell ALL prospectively enrolled in this trial. Percentage of total body fat and lean muscle mass was measured directly, using the gold standard of dual-energy X-ray absorptiometry (DXA) at time of diagnosis, one month later, and later during chemotherapy treatment. BMI z-score – a measure of how a given child’s BMI deviates from a population of children of the same age and sex – was also determined at these time points.

“We found that change in BMI did not reflect changes in body fat or obesity,” said Etan Orgel, MD, first author on the study and an attending physician in the Survivorship & Supportive Care Program at the Children’s Center for Cancer and Blood Diseases at CHLA. “In some patients, reaching a “healthy” BMI was due solely to loss of muscle even while body fat continued to rise.  Based on these results, we believe that evaluation of obesity in patients with leukemia should include direct measures of body composition.”

Additional contributors to the study include Nicole M. Mueske, Richard Sposto, Vicente Gilsanz and David Freyer, all of Children’s Hospital Los Angeles. Funding was provided in part by the National Center for Advancing Translational Sciences/NIH (UL1TR000130), the Leukemia and Lymphoma Society (LLS-6249-11), Hyundai Hope on Wheels Foundation, and The Saban Research Institute.