A new study led by researchers at The Saban Research Institute of Children’s Hospital Los Angeles (CHLA) reports that the presence of leptin – a hormone secreted by fat cells that is critical to maintaining energy balance in the body -- inhibits the prenatal development of neuronal connections between the brain and pancreas. The findings could help explain the origin of type 2 diabetes, particularly in children of obese mothers. 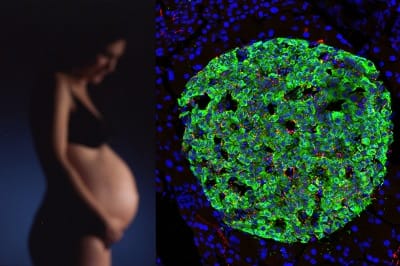 Development on brain-pancreas axis during gestation

This study reveals an unanticipated regulatory role of leptin on the parasympathetic nervous system during embryonic development, which may have important implications for understanding the early mechanisms that contribute to diabetes. The findings will be published online by the journal Cell Reports on March 24 in advance of print publication on April 5.

“We showed that exposure of the embryonic mouse brain to leptin during a key developmental period resulted in permanent alternations in the growth of neurons from the brain stem to the pancreas, resulting in long-term disturbances to the balance of insulin levels in the adult mouse ,” said Sebastien G. Bouret, PhD, researcher in the developmental neuroscience program at CHLA.

Looking at when autonomic innervation occurred – creating direct connections between the brain and pancreatic β cells – and the factors influencing it during embryonic development, the scientists found that leptin receptors are highly expressed in the brain stem.  When the scientists injected a single dose of leptin directly into the brain of mouse embryos during mid-gestation, it had a permanent effect of reducing connectivity between brain stem and pancreas.

“This breakdown in communication from the brain to the pancreas resulted in impaired glucose regulation, or homeostasis, in the adult mouse,” said Bouret, who is also an associate professor of pediatrics at the Keck School of Medicine of the University of Southern California.  “This study reveals an unanticipated regulatory role for the leptin hormone known to be produced by fat cells. Because babies of obese moms have high levels of leptin, it might put them at a higher risk for type 2 diabetes and obesity.”

Additional contributors to the study include first author Sophie Croizier of Children’s Hospital Los Angeles, and Vincent Prevot of Inserm, Jean-Pierre Aubert Research Center, Lille, France. The work was supported in part by grants from the National Institutes of Health (DK84142, DK102780, and P01ES022845) and the United States Environmental Protection Agency.