LOS ANGELES – Panda Express has made a $10 million philanthropic commitment to Children’s Hospital Los Angeles (CHLA). In honor of this pledge, the sixth floor of the Marion and John E. Anderson Pavilion, which opened in 2011, will be named the Panda Express Floor. In addition, a large panda statue will be permanently placed in CHLA’s Emergency Department bamboo garden. 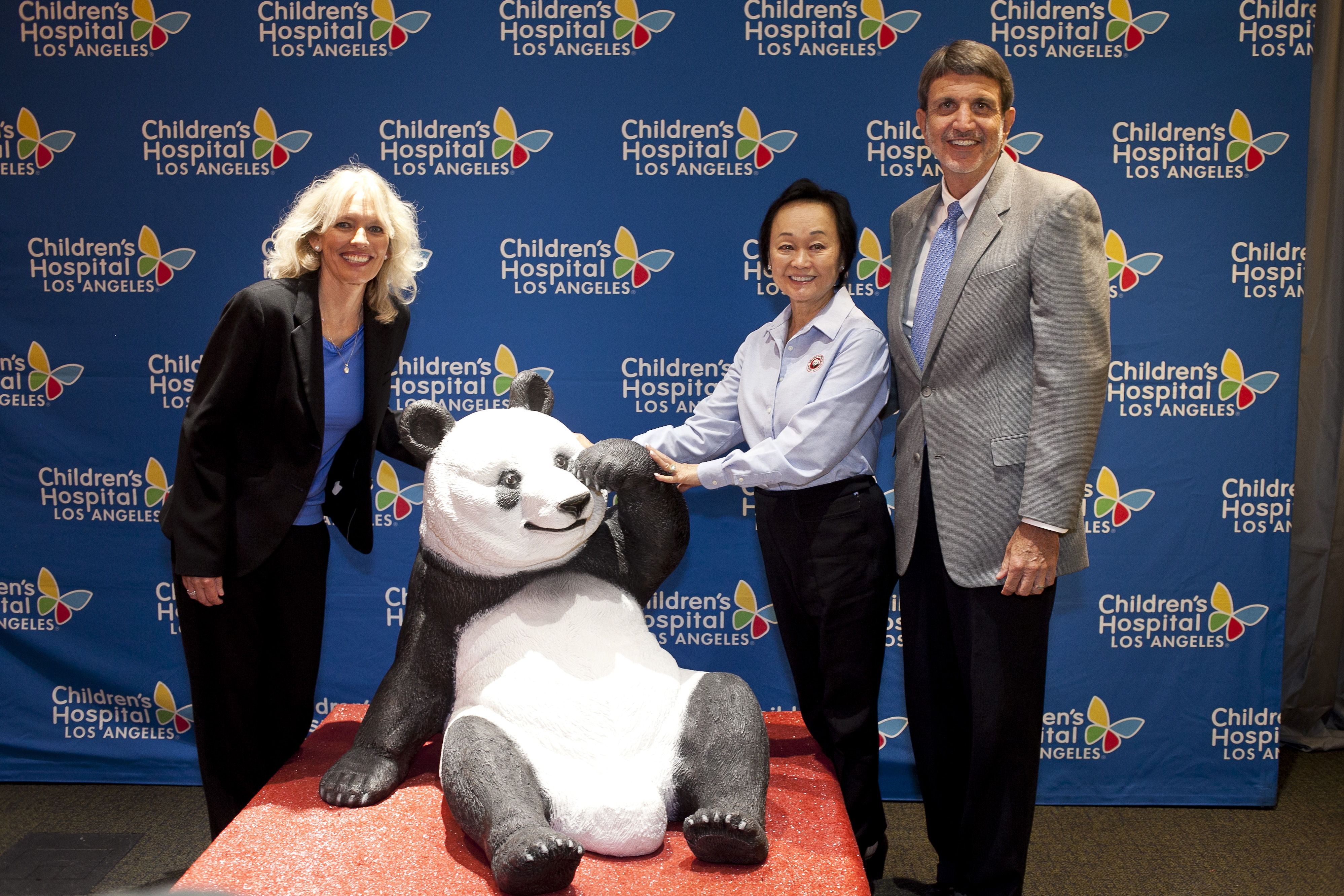 “Panda Express has been an incredibly motivated, hands-on community partner to CHLA and we are honored by their continued commitment to help us provide world-class medical care to our pediatric patients,” says Paul Viviano, CHLA president and chief executive officer.

In addition to their pledge, Panda Express is providing funding for activity booklets that will be distributed to Emergency Department patients by CHLA’s Child Life Staff.  These booklets are meant to provide an engaging and fun distraction for young patients who may be fearful of being in a hospital setting.

Since 2003, Panda Restaurant Group has raised nearly $6.5 million for CHLA through multiple means including Panda’s in-store donation boxes in its restaurants where customers can donate their change, workplace giving with its employees, the annual Panda Cares Charity Golf Invitational and CHLA’s biennial gala.

Andrew and Peggy Cherng are the co-chairs and co-chief executive officers of Panda Restaurant Group, one of the most recognizable American Chinese restaurant companies in the world. The Rosemead, Calif. based firm, which owns Panda Express, operates close to 2,000 restaurants and employs nearly 30,000 people. Family owned, the company reached $2.8 billion in revenue in 2016. In 2014, Panda Restaurant Group was honored with the Neighbor Award by the National Restaurant Association for its charitable contributions to the community.

Andrew is the co-founder and the visionary behind Panda Restaurant Group. His business insights have propelled Panda to become the world leader in Asian dining experiences and his passion for continuous learning created a company culture where associates are inspired to better lives while developing their fullest potential.

Andrew’s business acumen has been recognized by Forbes magazine, the Los Angeles Business Journal and the Asia Society Southern California. He was conferred an honorary Doctor of Humane Letters by California State Polytechnic University, Pomona. Under Andrew’s leadership, Panda Restaurant Group was named one of America’s best employers by Forbes and ranked the number one Asian quick-service concept for seven consecutive years by QSR.

Peggy Cherng has been a driving force in the success of Panda Restaurant Group since joining the organization in 1982. Leveraging her engineering background, Peggy developed the operating systems that support Panda’s growth and help associates deliver consistent dining experiences to guests. Her holistic vision for people development led to the creation of the University of Panda, a core component of the company’s people development strategy.

Peggy is deeply committed to giving back to the communities in which Panda restaurants operate through the Panda Cares Foundation, a philanthropic effort founded in 1999 that has donated millions of dollars to non-profit organizations, schools and children's hospitals. Peggy serves on the CHLA Board of Trustees, and the boards of the Federal Reserve Bank of San Francisco, Los Angeles Branch and Caltech. Prior to joining Panda Restaurant Group, Peggy was a leading member of the software development team for organizations such as McDonnell Douglas and Comtal-3M.

Children's Hospital Los Angeles has been ranked the top children’s hospital in California and sixth in the nation for clinical excellence with its selection to the prestigious U.S. News & World Report Honor Roll. CHLA is home to The Saban Research Institute, one of the largest and most productive pediatric research facilities in the United States. Children’s Hospital is also one of America's premier teaching hospitals through its affiliation with the Keck School of Medicine of the University of Southern California since 1932. For more information, visit CHLA.org. Follow us on Twitter, Facebook, YouTube, LinkedIn and Instagram, and visit our child health blog (www.WeTreatKidsBetter.org) and our research blog (www.ResearCHLABlog.org).