Researchers at The Saban Research Institute of Children’s Hospital Los Angeles have identified an unsuspected and critical role of the MDM2 oncogene in promoting expression of the MYCN oncogene that is required for growth and survival of retinoblastoma cells.  Their results are published in the October 17 online edition of the Nature journal Oncogene.

Retinoblastoma is a childhood retinal tumor usually affecting children one to two years of age.  Although rare, it is the most common malignant tumor of the eye in children and, left untreated, retinoblastoma can be fatal or result in blindness. It has also played a special role in understanding cancer, because retinoblastomas have been found to develop in response to the mutation and loss of a single gene – the RB1 gene. 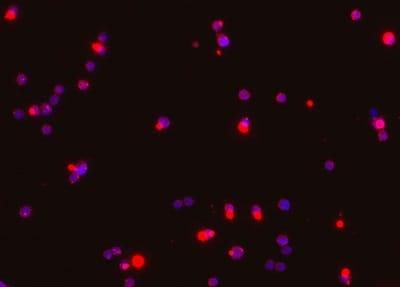 Previous studies in the lab of principal investigator David Cobrinik, MD, PhD, of The Vision Center and Division of Ophthalmology at Children’s Hospital Los Angeles, uncovered that human retinoblastoma arises from cone cells. This study looked at characteristics that make these cells prone to retinoblastoma when RB1 is inactivated, allowing unchecked cell proliferation.

“An important way in which cone cells differ from other retinal cell types is their high expression of MDM2 and MYCN,” said first author Donglai Qi, PhD, a post-doctoral researcher in the Cobrinik lab. “We have shown crosstalk between these two oncoproteins in which MDM2 promotes MYCN expression in retinoblastoma cells.”

MDM2 is considered to be an oncogene (cancer-promoting gene) because it can contribute to the transformation of a normal cell into a cancer cell.  Until recently, MDM2 was thought to do this mainly by inhibiting a tumor suppressor protein, p53, which causes aberrantly proliferating cells to undergo apoptosis. However, MDM2 also plays key p53-independent roles in different signaling pathways, and the researchers found that one such role is especially important in retinoblastoma.

The protein which MDM2 was found to regulate, MYCN, also plays an important role in cell proliferation. In addition to its presence in retinoblastoma, MYCN is amplified in 20 to 25 percent of neuroblastoma tumors, and correlates with advanced disease and poor prognosis.  It also plays a role in other childhood cancers, such as medulloblastoma, making MYCN a potentially important therapeutic target.

However, because MYCN has been especially difficult to block using small molecules, the CHLA researchers’ next step will be to look for ways to target the mechanism through which MDM2 regulates MYCN expression.

“This identification of a critical and unexpected node in the retinoblastoma signaling circuitry could theoretically lead to pharmacologic targeting,” says Cobrinik, who is also with the Roski Eye Institute, Departments of Ophthalmology and Biochemistry & Molecular Medicine, and Norris Comprehensive Cancer Center at Keck School of Medicine of the University of Southern California.

The study also answers a longstanding debate among researchers of whether human retinoblastoma is more dependent upon MDM2 or its family member MDM4, for the first time showing that it is MDM2 and not MDM4 that plays the critical role in tumor growth.

The study was supported by NIH grants 1R01CA137124 and P30CA014089, by a Saban Research Institute Research Career Development Fellowship (D.–L. Qi), by Research to Prevent Blindness (New York, New York), by the Larry & Celia Moh Foundation, and by the charitable support of the Nautica Malibu Triathlon event produced by MESP, Inc.

Children's Hospital Los Angeles has been named the best children’s hospital on the West Coast and among the top five in the nation for clinical excellence with its selection to the prestigious U.S. News & World Report Honor Roll. Children’s Hospital is home to The Saban Research Institute, one of the largest and most productive pediatric research facilities in the United States. Children’s Hospital is also one of America's premier teaching hospitals through its affiliation since 1932 with the Keck School of Medicine of the University of Southern California.

For more information, visit CHLA.org. Follow us on our blog http://researchlablog.org/.