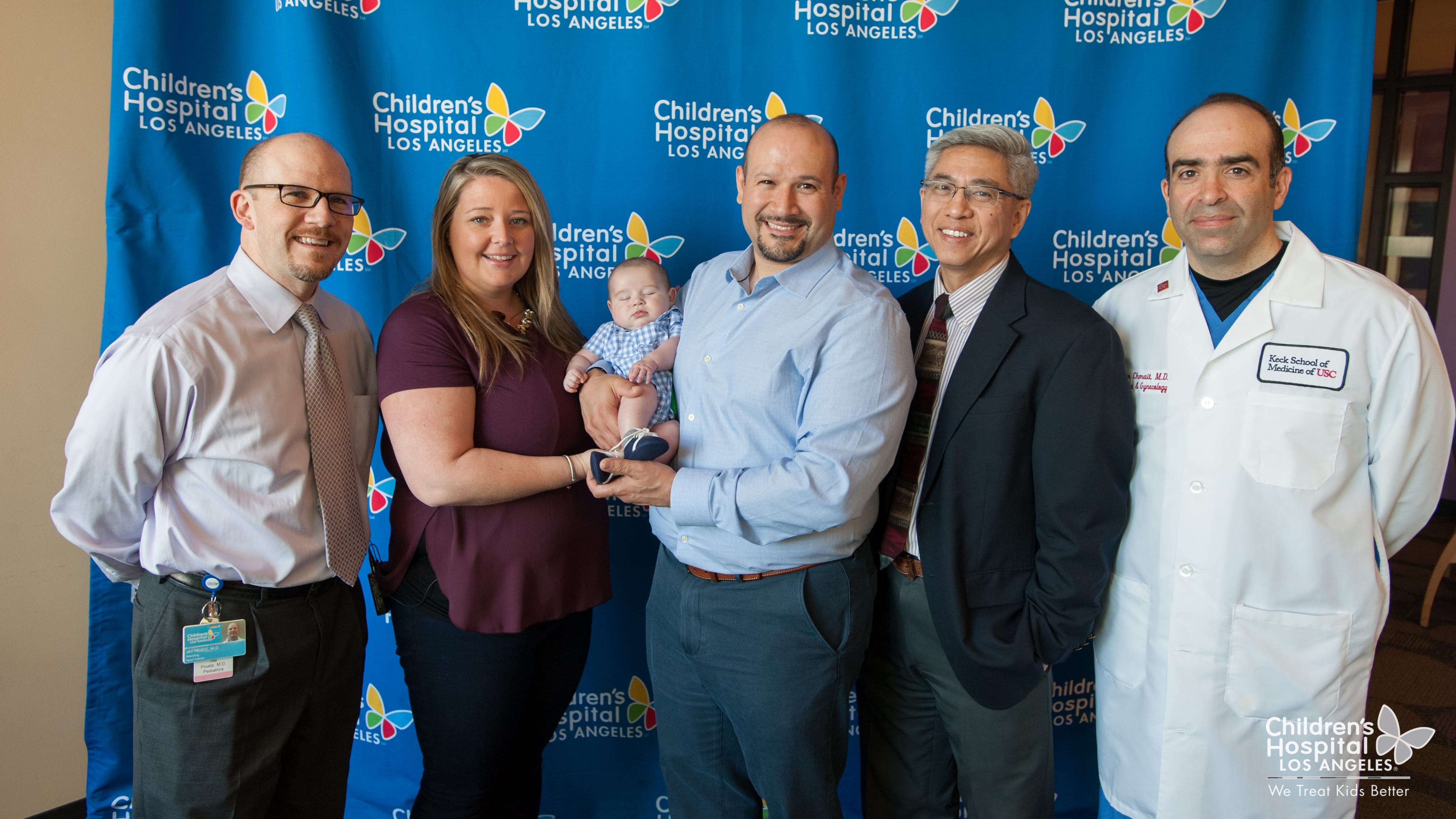 LOS ANGELES – Last August, when Children’s Hospital Los Angeles (CHLA) cardiologists confirmed that the heart of a 27-week-old fetus suffered from a critical cardiac condition that prevented blood returning from the fetus’s lungs from circulating back into the body, they told the parents that their child faced certain open-heart surgery after birth. Even worse, babies born with this very rare condition—hypoplastic left heart syndrome (HLHS) with restrictive atrial septum—have a 50 percent neonatal mortality rate.

But thanks to the expertise available at CHLA, the Davilas had another option—having their unborn child (now delivered and named Grayson) undergo a fetal cardiac intervention procedure in utero that would increase the odds of the child’s survival when the open-heart surgery took place. The procedure would be coordinated by fetal therapy specialists from the CHLA-USC Institute for Maternal-Fetal Health, a medical team unlike any other in Southern California.

“CHLA was the only institution I could find on the West Coast that offered my child the access to premium, state-of-the-art facilities and great care before and after his birth,” says Grayson’s father, Marco Davila, a technology director at a semiconductor company.

On Sept. 9, the physicians gathered at CHA Hollywood Presbyterian Medical Center to perform what cardiologists describe as an “in utero atrial septal stent procedure” to open the atrium, allowing blood trapped in the lungs and left upper heart chamber of a HLHS fetus to flow back to the right side of the heart. The successful procedure was a first for the Institute for Maternal-Fetal Health and a first for a Southern California hospital.

The fetal interventionalist conducting the procedure was Ramen Chmait, MD, director of Los Angeles Fetal Surgery, a branch of the CHLA-USC Institute for Maternal-Fetal Health. Chmait guided a thin needle into the mother’s womb and into the heart of the fetus. Pediatric interventional cardiologist Frank Ing, MD, co-director of the CHLA Heart Institute, then deployed a stent device in the developing child’s heart. Ultrasound guidance (fetal echocardiogram) provided by CHLA fetal cardiologist Jay Pruetz, MD, showed the way for both physicians.

“The work by the team demonstrated the state-of-the-art prenatal diagnosis and fetal heart therapy technology, based on a multi-disciplinary approach, available for fetuses with severe congenital heart defects,” says Ing, chief of the Division of Cardiology at CHLA.  “We demonstrated that in utero procedures can ultimately alter the natural history and postnatal health outcomes to increase a child’s odds for survival. This expertise was brought together by a vision to provide these specialized interventions and top surgical care as no other institution can in Southern California.”

“Completing this highly specialized fetal intervention procedure contributed to Grayson’s ability to survive after his birth,” says Chmait, associate professor of Clinical Obstetrics and Gynecology at the Keck School of Medicine of the University of Southern California. “It successfully strengthened his lungs so the surgeons could do their job after he was born.”

Everything about the procedure required special preparation. Incredibly small fetal microsurgery tools, including a 12-centimeter metal needle, and a tiny transcatheter metal stent that inflates to 2.8 millimeters across the atrial septum, were used to perform the procedure. The mother, Samantha Davila, received local anesthesia. The baby was anesthetized in the womb so there would be no ill-timed movements as the doctors worked.

Chmait used a thin (18-gauge) metal needle, called a cannula, to penetrate the mom’s stomach, guiding it into her uterus, through the amniotic cavity and into the fetus’s torso. The cannula was carefully finessed into the fetus’s heart (which is about the size of a small walnut), puncturing the atrial septum with the needle tip inside the fetus’s left atrium.

With the cannula stationed across the atrial septum, Ing then threaded a hair-thin wire (0.014 inches) down through the tube, the wire acting as a rail for Ing to gently maneuver a tiny, 8-millimeter-long stent across the septum. Ing mounted the stent onto a balloon catheter for delivery and used a predetermined amount of pressure to inflate the delivery balloon and expand the stent to open a pathway in the atrial septum. The team of doctors determined the stent was in good position by ultrasound imaging, and then deployed it by inflating the balloon catheter. 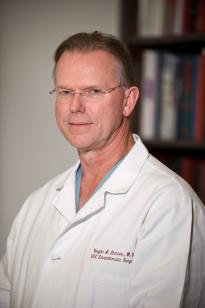 Vaughn Starnes, MD, performed the Norwood procedure an hour after Grayson was born. (Photo courtesy of Keck Medicine of USC)

Once the stent was confirmed to be functioning, the balloon catheter was deflated and everything was removed from the baby and the mother, including the wire and needle. The stent remained in the heart to allow blood flow out of the left upper chamber, across the atrial septum, and back into circulation in the right side of the heart. The procedure itself took about 15 minutes once the fetus was in place. After 30 additional minutes of monitoring, the procedure was concluded.

During the remainder of the pregnancy, Samantha, a program manager at an aerospace and defense company, was followed closely to ensure that the atrial stent was functioning well. The stent held up until the late third trimester, when it appeared to close down, providing little to no flow between the fetus’s upper heart chambers, Pruetz says. But in the interim, the lungs had been given time to strengthen and develop during a critical time window of gestation. Ten weeks after the stent procedure, mom Samantha gave birth via a planned cesarean section at Hollywood Presbyterian. Grayson was born on Nov. 19 at 8:29 a.m.

Following Grayson’s delivery, the closure of the atrial septum in Grayson’s heart prevented the lungs from delivering enough oxygenated blood back to his body. Consequently, Grayson was immediately transported next door to CHLA. There, a pediatric cardiothoracic surgery team was standing by to perform a full Norwood surgery, led by Starnes. Starnes began the operation just 90 minutes after birth, which is uncommon but was determined to be safe for Grayson because the stent procedure had successfully promoted lung development, enabling him to survive the invasive operation.

The Norwood surgery uses the right heart and pulmonary artery to become the main pathway for pumping blood to the body. Starnes removed the stent from Grayson’s heart and also performed a Sano modification using a tube to connect the right ventricle to the pulmonary artery as part of the Norwood procedure. “We were able to operate quickly because we were aware of his condition and Grayson’s lungs were strong enough,” Starnes explains. “This coordination of care between the fetal therapy team and CHLA surgeons was extraordinary, starting with the transcatheter fetal cardiac procedure, the monitoring during the pregnancy leading up to the birth, and the surgery.”

Grayson was discharged from CHLA on Dec. 14 and went home with his thrilled parents. “The health outcomes for children who receive the Norwood procedure at CHLA are considerably higher than the national average,” Starnes says. Grayson still has two additional heart surgeries ahead, the Glenn and the Fontan, procedures that route oxygen–poor blood directly to the lungs, leaving the right ventricle employed as the heart’s primary pumping chamber. Those operations will take place over the next six months and at 3 years of age, respectively.

Children's Hospital Los Angeles has been named the best children’s hospital in California and among the top 10 in the nation for clinical excellence with its selection to the prestigious US News & World Report Honor Roll. Children’s Hospital is home to The Saban Research Institute, one of the largest and most productive pediatric research facilities in the United States. The hospital is also one of America's premier teaching hospitals through its affiliation since 1932 with the Keck School of Medicine of the University of Southern California.