A liquid biopsy for retinoblastoma

Retinoblastoma is a tumor of the retina that generally affects children under 5 years of age. If not diagnosed early, retinoblastoma may result in loss of one or both eyes and can be fatal. Unlike most cancers that are diagnosed using a biopsy, retinoblastoma tumors cannot be directly biopsied. Although it is one of the first cancers to have its genetic origin identified, ocular oncologists have not been able to use this information to optimize treatment since they can only access the tumor if the affected eye is removed (called enucleation) in the course of treatment. A recent study by a team of investigators at the Vision Center of Children’s Hospital Los Angeles and the University of Southern California (USC) Roski Eye Institute, part of Keck Medicine of USC, provides proof of concept for a safe and effective way to derive genetic information from the tumor without removing the eye.  Results of the study will be published in JAMA Ophthalmology on October 12, 2017. 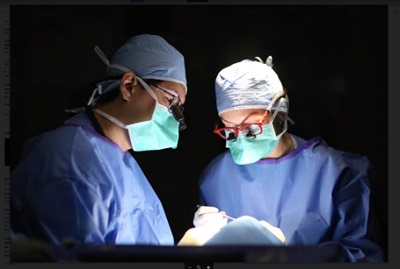 Retinoblastoma was one of the first tumors to have its genetic origin identified; the RB1 retinoblastoma tumor suppressor gene mutation was discovered by A. Linn Murphree, MD, a co-author on this paper, who established the Retinoblastoma Program at Children’s Hospital Los Angeles. However, ocular oncologists have been limited in their ability to use this genetic information to inform diagnosis and the application of personalized treatments since removing tissue from the tumor in the back of the eye could spread tumor cells outside of the eye or even to the rest of the body, resulting in a far worse prognosis for the patient.

Retinoblastoma is treated using chemotherapy given either intravenously or through the ophthalmic artery. There are limits, however, to the amount of drug that actually reaches the eye. As a result, relapse does occur due to small tumor particles that break off – or seed – from the main tumor. The treatment for these seeds changed dramatically in 2012 when intraocular injections of chemotherapy were shown to be safe and effective. In order to inject chemotherapy directly into the eye, it is first necessary to remove a small amount of fluid, called aqueous humor, from the front of the eye, to decrease the pressure within the eye prior to injection of the medication.

Previously, this fluid was simply dispensed after the procedure. “Just as I was discarding the aqueous humor, I wondered if there was a possibility it contained tumor-derived genetic material we could use to better treat our patients,” said Jesse Berry, MD, ocular oncologist at CHLA, assistant professor of Clinical Ophthalmology at the USC Roski Eye Institute and first author on the study. “In fact, we found measurable amounts of tumor DNA – genetic information from the tumor that had previously been completely unavailable from an intact eye.”

“Chromosomal changes from DNA found in the aqueous humor corroborates the chromosomal changes found in the retinoblastoma tumor,” said James Hicks, PhD, professor of Biologic Sciences at the USC Michelson Center for Convergent Bioscience and professor at the Keck School of Medicine at USC. “These findings provide proof of principle that the aqueous humor can be used for a surrogate ‘liquid’ tumor biopsy.”

The study reported on six samples from three eyes affected with retinoblastoma, in children less than 3 years of age. Two of the eyes had been removed primarily for treatment of the disease; the third eye was receiving intraocular injections as therapy but ultimately had to be removed due to disease recurrence. Aqueous humor was taken from all three eyes and allowed investigators to compare tumor DNA in the aqueous humor to DNA found in the retinoblastoma tumor.

“Until now, we could only do genetic analysis – and base therapy on the specific pathologic tumor features  – when there was no longer a possibility of saving the eye,” said Thomas C. Lee, MD, director of the Vision Center at CHLA and associate professor at the USC Roski Eye Institute.  “In the future we hope to have the capability to specifically target therapy to the type of tumor and can anticipate better outcomes for children with retinoblastoma.”

The team of investigators plans future studies to compare tumor DNA from eyes that have been saved to those that need to be removed due to tumor recurrence.

This work was funded by Bright Eyes, the Nautica Foundation and the Knights Templar Eye Foundation. Additional support was provided by: Retinoblastoma International, Inc; the Larry and Celia Moh Foundation; the Institute for Families, Inc, Children’s Hospital Los Angeles; Research to Prevent Blindness; the Vicky Joseph Research Fund; the Carol Vassiliadis Research Fund; and the USC Dornsife College of Letters, Arts and Sciences.

About the USC Roski Eye Institute

About the USC Michelson Center for Convergent Bioscience

The USC Michelson Center for Convergent Bioscience brings together a diverse network of premier scientists and engineers from the USC Dornsife College of Letters, Arts and Sciences, USC Viterbi School of Engineering and Keck School of Medicine of USC to solve some of the greatest intractable problems of the 21st century – from cancer, to neurological disease, to cardiovascular disease. The team of world-class scientists representing several disciplines –biological sciences, chemistry, computer science, engineering, medicine, nanomedicine, neuroscience, and physics – will be the catalyst that precipitates a sea change in research and development at USC and the world, establishing a model for innovation in precision medicine that quickly translates from the bench to the bedside in the form of new drug therapies, cures, high-tech diagnostics and biomedical devices. With a generous $50 million gift from Gary K. Michelson, a retired orthopedic spinal surgeon, and his wife, Alya Michelson, the USC Michelson Center for Convergent Bioscience is an opportunity for USC to transform and influence the course of scientific discovery and biomedicine for generations to come.