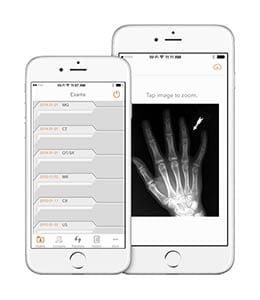 Physicians use a growing array of diagnostic imaging equipment, such MR, CT, ultrasound and X-rays.  Due to the massive size of the digital files, remote sharing of these medical images with patients or other clinicians has been very difficult. Patients have had to ask their radiologist to transfer medical images to a CD, then pick up these medical records in person and deliver them to a referring physician, when necessary – a very time-consuming and cumbersome process.

Now, parents of patients treated at Children’s Hospital Los Angeles can download a free app called ImageInbox on their smartphones, which allows them to receive imaging files or to request the files be sent directly to another caregiver. CHLA is the first clinical site to offer the app, which is now available for free to any patient. The large data files (for example, a typical MR image is about 500 MB in size) are encrypted and stored securely on a patient’s personal cloud-based system, which can also be accessed at no charge.

“The system is fully protected and private,” said Stephan G. Erberich, PhD, director of Biomedical Information at The Saban Research Institute of CHLA.  Erberich and Marvin D. Nelson, MD, chair of the Department of Radiology at CHLA – both also professors at Keck School of Medicine of the University of Southern California – are co-founders of NexGenic, the company that developed ImageInbox.  They created this first-of-its-kind app to improve the patient experience and provide assurance to both doctors and patients that healthcare information is available at the point of care.

“It allows parents to own -- and have immediate access to – their child’s imaging medical records,” said Erberich.

Daly said that she found it nearly impossible to obtain her daughter’s early brain scans to share with the neurosurgeons at Oregon Health and Science University Medical Center, so they could compare the large mass they were now seeing on Alexandra’s tonsil with images of the brain-stem bleed she had experienced as a child.  Facing exploratory surgery for her daughter, since OHSU were unable to compare their images to earlier ones, Daly reached out to Dr. Nelson and his team for help to quickly obtain Alexandra’s previous CT scans and MRIs from CHLA.

“We were one of the first families to use ImageInbox in an emergency situation, and it was an absolute life saver,” she said. Alexandra’s imaging records from CHLA showed doctors in Oregon that the mass they were seeing on their scans was actually an abscess that had been there for many years, and not a tumor.

“If we hadn’t been able to get these images quickly, my daughter would have faced unnecessary, invasive and potentially dangerous surgery,” Daly says.

She and Alexandra now have the imaging records stored on their personal cloud storage and accessible on their smartphones; the information is at their fingertips should they ever need it. “I’m all for this and think we should all be the holders of our own medical records,” Lee said, adding that as people move, or even need medical assistance while traveling, “you just never know when an emergency will occur.”

The app makes care more affordable—for patients, who can avoid having duplicate scans done when they switch health care providers; and for hospitals, that can readily exchange medical images electronically, directly with the patient, instead of using older, more expensive technologies like CDs to store and share the data.

“This also means the children can avoid unnecessary radiation exposure that can occur with repeating tests,” said Nelson.  “Importantly, their families will have these records, even multi-dimensional images like MRIs or 3-D CT, if and when they need them, anywhere in the world with internet access.”