Imagine Winter 2014 - In Their Own Words 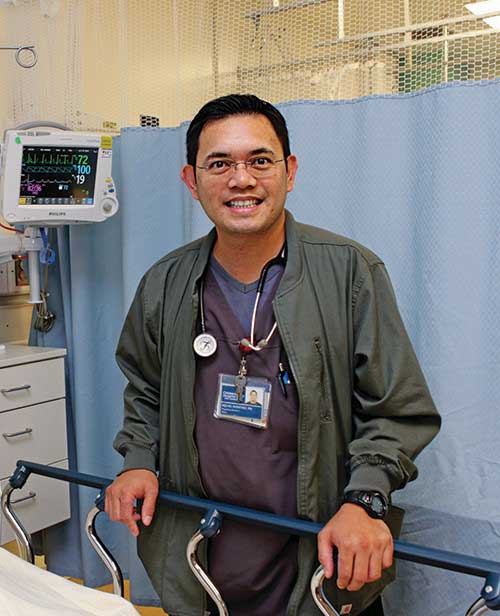 Describe a moment when you knew you made a difference.

What really caught my attention to work [at CHLA] is the realization that I can make a contribution in someone else’s life. Children’s Hospital nurses enjoy the reputation of being knowledgeable leaders. Moreover, it is the values of respect, excellence, service, knowledge and teamwork that became the infrastructure of our culture of caring and nurturing.

These ideals impressed me because they reminded me of a particular instance when I know I made a difference in someone’s life. [The] patient was a 17-year-old teen named Pete* who was involved in a motor vehicle accident. As a result of the accident Pete became quadriplegic, stuporous and necessitated a tracheostomy tube to help him breathe. Dad was with his boy and demanded everything be done right for his child. I introduced myself and laid out the plan of care for Pete. Teamwork from other disciplines -- such as physical therapists, respiratory therapists, occupational therapists, Child Life and Spiritual Care Services -- played an integral part of his voyage to recovery.

Pete’s dad was his sole source of family support. His dad would always advocate for other methods of treatment, including acupuncture, in the hopes that Pete might one day wake up from his stuporous state. I suggested to Pete’s dad to bring in his favorite things, pictures, and to play his favorite CDs. Each day I would play his favorite music, chat with him, and tell him exciting stories or read to him. The inevitable day had come, however, when our rehab doctor announced that Pete’s care would be transferred to a subacute facility near the patient’s place of residence. Pete’s father broke down in tears. He whispered to me, “I am not worried. Pete will bounce back. I know it!”

Five years passed, and I had transferred to the PACU team. One day, I was stunned to hear my name being called out loud at the 6 North dome area. I was stunned to see that Pete was walking and talking. Pete told me all about his stay at 6N when I was taking care of him. He said that he could hear everyone’s voices, including mine; we were unaware that Pete could hear our voices when we were near him. He was particularly thankful that I told him stories and played his favorite CDs. From that day on, I was deeply touched, honored and humbled by the fact that I truly made a difference in someone’s life.

If you Live L.A., Give L.A. Every dollar of your gift will help provide world-class care for every child that comes through our doors from special staff like Miguel. Visit CHLA.org/GiveLA.