Pat Levitt’s research into the origins of childhood brain disorders promises to transform CHLA’s Institute for the Developing Mind. 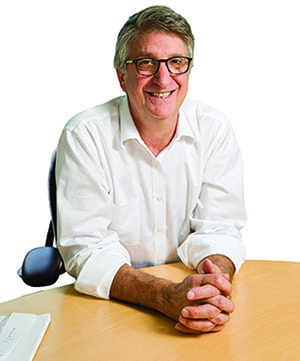 He raises his hand as if announcing his presence -- or swearing himself in. Having just been told his explanation that one in five U.S. children has a brain disorder sounds too high, he offers himself up as evidence.

“I had no fluent speech at all. Zero. One of my brothers stuttered. My father stuttered. I had an uncle who stuttered -- a great-uncle, actually.”

Levitt says his family history demonstrates how early intervention can mitigate neurological impairments. He began seeing a speech language pathologist when he was nine or 10; his brother received therapy as a teenager; his father, not at all.

“My father stuttered, severely, even as an adult. My brother is much improved, but still has more hesitant speech than I do. I give talks to 10,000 people and typically have no hesitation at all. I received intervention relatively early and my brain architecture changed.”

Levitt says brain architecture often. Why the brain does what it does and what can happen to compromise its development has galvanized his 40 years of research. He came to Children’s Hospital last July from the University of Southern California, where he oversees the Neuroscience Graduate Program, for his best opportunity yet at a fuller understanding of how the mix of genetic and environmental factors produces brain disorders.

“We want to take the research findings and work with clinicians here to identify those children who are at greatest risk,” he says, “and then get them into programs that will change their developmental trajectory.”

Numerous genetic sources of brain disorders have already been identified, some in Levitt’s own lab, including the discovery of a gene that increases risk for autism. He cites several prenatal environmental influences that also increase risk for neurodevelopmental disorders: first-trimester viral infections, malnutrition, prematurity and drug use.

Levitt is now trying to determine how genes and the environment weigh upon each other. He mentions studies by Heather Volk, PhD, principal investigator at The Saban Research Institute of Children’s Hospital Los Angeles, testing the combination of a genetic variation and high exposure to air pollution, each of which carries an independent risk for autism. “When you put the two together, we see that the risk goes up,” he says. “That’s a good example of what our program is striving for.”

It would be too simple -- and wrong -- to presume that Levitt’s own neurological issues naturally led him to seek answers on brain disorders.

“In high school, I couldn’t stand science,” he says. “I was thinking about law. But I still stuttered back then. A stuttering lawyer? How was that going to work?”

An undergraduate class in developmental biology spun him around. “I was blown away by the idea that you could start out with a few cells and create us. How do you start simple and make something so complex? How does that work?”

After a professor invited him to join a research project, he grew enthralled with scientific discovery -- and nothing in 40 years has diminished that. “There’s something really exciting and romantic about it,” he says.

In one profound six-year period, Levitt’s research identified a gene that increases risk for autism spectrum disorder (2006); showed that the gene is more common in children who have both autism and gastrointestinal issues (2009); and discovered the prevalence of high levels of oxidative stress in those same kids who have autism and GI problems (2012).

He loves that discovery often happens by accident. The finding of a genetic connection between autism spectrum disorder and gastrointestinal disturbances -- “a game changer,” Levitt says -- was set in motion during a coffee break at an autism grant review session, when a parent approached Levitt and mentioned reading that 40 percent of autistic children have
GI problems. He had been sent that same article, but set it aside. “I thought, ‘Oh, that’s nice. I don’t study the gastrointestinal system.’”

The conversation prompted an aha moment -- the jingling of an idea. Back in the lab, Levitt confirmed that the genetic variant exists more commonly in children who have both autism and GI issues than it does in those with only autism. “Sometimes it’s serendipity,” he says. “Stuff just comes together; you can’t explain it.”

He acknowledges that not all aha moments pan out, recalling one that ended in an oh-no moment after progressing from inspiration to experimentation. “I had a roommate in college who put tuna fish on top of spaghetti with red sauce. It was his aha moment, and it was awful. He’s now a famous chemist.”

Levitt would applaud him for trying, though. “There has to be a willingness to take a chance. That’s the environment I want to create for our program.” He thinks the next great discovery lies within the areas of our genome that scientists used to call genetic deserts because their function wasn’t known.

“About 80 percent of that space is occupied by DNA that is regulatory,” he says, “meaning it controls when and where the genes are turned on and off. That’s where genetic variation is. If we can figure out how that regulation occurs, and the influence of environment, we can figure out what goes wrong in brain development, and then how to fix it. That’s the holy grail, and that’s what we’re going after.”