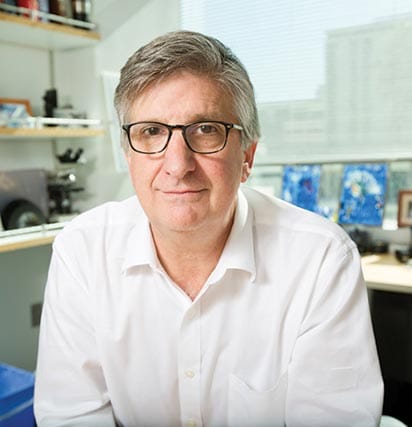 That, says Pat Levitt, is the big question at the core of his research into the roots of childhood brain disorders.

Neuroscientist Pat Levitt, PhD, has been chasing a soft, three-pound object for the past 40 years. Yet even as each new discovery brings him nearer to tracking it down, he knows the pursuit will go on.

“The brain is sort of infinity,” says Levitt, who holds the Simms/Mann Chair in Developmental Neurogenetics within the Institute for the Developing Mind (IDM) at Children’s Hospital Los Angeles. “I think that’s the problem. You’ve got trillions of connections, and they’re not soldered.

“Neurodevelopmental disorders, at their essence, are disorders of information processing,” he explains. “That’s fundamentally getting the wiring diagram right -- brain cell A has to connect to brain cell B. There used to be question marks when you drew that diagram out, and now we have eliminated a lot of them.”

Levitt came to Children’s Hospital last July to try to cross off one more: How does the interplay of genes and environment increase the risk for disorders that disrupt memory, learning and social and emotional well-being?

“Right now we’re waiting until the person has the disorder, and then we try to treat it,” says Levitt, whose Developmental Neurogenetics program forms one of the IDM’s three spheres of research emphasis; behavioral neuroscience and neuroimaging are the other two. His work is driving the IDM further toward its goals of understanding the origins of neurodevelopmental conditions, and then developing interventions that can moderate or even preempt them.

Levitt is doing his part. His lab has made a trio of important discoveries in recent years, identifying a gene in 2006 that increases risk for autism spectrum disorder, and then following up in 2009 by showing that the gene exists more commonly in children who have both autism and gastrointestinal issues. This past year came the third breakthrough, when Levitt found a prevalence of high levels of oxidative stress in those same kids who have autism and GI problems. The findings have substantial clinical applications.

“You can treat the oxidative stress problems,” he says, “which may have an impact on brain function as well as GI function. Or if we can treat the GI problems, the child will become more compliant with the interventions they’re getting.”

The process of scientific discovery captivates Levitt -- and has since he was first invited to join a research project as an undergraduate at the University of Chicago in the early 1970s. “I’m still excited and jazzed by it all,” he says.

But he also says the speed with which technology now allows researchers to obtain data has left neuroscience with a new problem. All that information, arriving in terabytes per hour, has to be sorted before anyone can pull more discoveries from it. He finds a useful analogy in his fascination with looking at flight patterns online.

“There are thousands of planes in the air -- it looks like spaghetti! How can anybody make sense out of it? Let’s say all that information was related, and your goal was to find patterns in it that would relate disease to non-disease. How would you do it? That’s what we’re facing now.”

Much like Google and Amazon have, the IDM wants to hire informatics experts, Levitt says. “They don’t generate the data -- they’re not biologists -- but they know how to manage data and how to develop new models and algorithms to pull patterns out of something that seems impossible.”

Pulling patterns out of something that seems impossible could double as Levitt’s own job description, as he continues to try to decipher the body’s most inscrutable organ.

“I do a lot of public policy work,” says Levitt, who serves as the science director for the Harvard University-based National Scientific Council on the Developing Child. “I go out and talk to people all the time about the importance of early experience in building healthy brain architecture. I say, ‘Look, I love my heart. I can’t live without it. But the passion of trying to figure out who we are and how we develop, how we become what we become—that’s not about the four chambers of the heart. That’s about the brain.’ The brain is what the human condition is all about.”