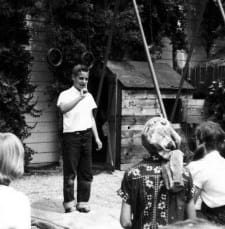 Top photo: Bruce Meyer as a child, entertaining neighbors at one of the circuses he and Kathy Rose put on to benefit Children's Hospital Los Angeles.

Close friends Bruce Meyer and Kathy Rose have been raising money for Children's Hospital Los Angeles since childhood -- and they’ve joined forces once again. As the story goes, the long-time friends hosted circuses in Kathy’s backyard over 50 years ago, charging their neighbors and parents five or 10 cents admission. When next door neighbor Mrs. Joseph Brent (Katharine) Banning brought a check for $100, the kids thought they had hit the jackpot. Kathy’s mother, Kate Ridgway Luppen, suggested that they give the proceeds to Children's Hospital Los Angeles. With that, two dedicated philanthropists were born.

Flash forward a few years, when Kathy joined the Children's Hospital Board of Trustees in June 2007, stepping up to launch the Children’s Fund, the hospital’s new mission-based giving program. “What I love about the Children’s Fund is that it supports the more than 100 subspecialty services provided by Children's Hospital -- the things that make it so vital to the community,” says Kathy. “I feel very lucky to co-chair this mission-based effort.”

“My involvement with the Children’s Fund started when Kathy came to me for some conceptual help, about involving the passionate automotive community,” says Bruce. This led Kathy to ask him to join her as co-chair. “We have been great friends for more than 50 years, and she’s an outstanding person. You just can’t say no to her!”

And with that, Bruce and Kathy joined forces once again to raise funds to support the mission of Children's Hospital Los Angeles -- and inspire their friends to do the same. As co-chairs of the Children’s Fund, they’ve just launched the “Children’s Fund 100” -- a core group of donors who pledge $100,000 or more over a one- to five-year period to sustain the mission of the hospital. The Roses and Meyers have themselves become Children’s Fund 100 members.

“By introducing new people to Children's Hospital, we hope they will be inspired to get involved with the hospital beyond their first gift,” says Bruce. As members of the Children’s Fund 100, donors receive a variety of benefits, including invitations to exclusive annual events for members and their friends, and recognition on the Donor Wall, website and Imagine magazine donor honor roll.