COOL IT
By Debra Kain

When something goes wrong around the time of a baby’s delivery, a new mom can go from the best day of her life to her worst nightmare. And the team at Children’s Hospital Los Angeles may have only hours to intervene.

“In almost every case, there is no warning. Literally, in an instant, what was anticipated to be a beautiful birth becomes a life-or-death situation,” says Jessica Wisnowski, PhD, of the Department of Radiology at Children’s Hospital Los Angeles and assistant professor of Radiology and Neonatology at the Keck School of Medicine of the University of Southern California (USC).

Perinatal asphyxia, also known as hypoxic-ischemic encephalopathy (HIE), occurs when a newborn infant suffers a lack of oxygen during the birth process. Most commonly, it occurs in normal pregnancies, with complications arising just before or during birth—such as a drop in the mom’s blood pressure, rupture of the uterus, premature separation of the placenta from the uterus or an umbilical cord wrapped around the baby’s neck.

Without treatment, these babies often develop cerebral palsy or other severe complications, including blindness, deafness, intellectual impairments, learning disabilities and even death. Annually, more than half a million babies die from HIE worldwide, and an equal number are left with lifelong disabilities.

Therapeutic hypothermia, or targeted cooling of the brain, is the first-line therapy for neuroprotection in newborns with HIE. It involves cooling an infant’s core body temperature down from 98.6 F to 92.3 F, starting as soon as possible after birth and continuing for 72 hours.

Physicians have known for a few decades that brain injury from HIE is an evolving process, disrupting metabolism at the cellular level. It is precisely because the underlying processes leading to cell death can take days, if not weeks, to develop that scientists have this window of opportunity to intervene with potential neuroprotective therapies to save brain cells.

Wisnowski explains that it’s paradoxical that hypothermia works because “we are slowing down brain metabolism at the same time that the brain is trying to repair itself.” 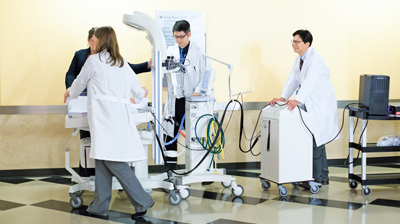 Transporting a premature infant and cooling equipment to the MRI suite

Five years ago, clinicians and scientists from the Department of Radiology and the Division of Neonatology started a research study focused on perinatal asphyxia. Today, this project has grown into the multidisciplinary CHLA-USC Collaborative Research Program for Neonatal Hypoxic-Ischemic Encephalopathy, led by Wisnowski and Tai-Wei Wu, MD, an attending neonatologist at CHLA and an assistant professor of Pediatrics at the Keck School of Medicine of USC.

Published in 2015, the study confirmed hypothermia’s neuroprotective effects on newborns with HIE. In the study, Wisnowski, principal investigator Stefan Bluml, PhD, and colleagues from both the Department of Radiology and the Steven & Alexandra Cohen Foundation Newborn and Infant Critical Care Unit (NICCU) at CHLA conducted magnetic resonance spectroscopy (MRS) studies on 31 newborns with HIE during hypothermia, and again after the infants were rewarmed.

The team of researchers, neonatal physicians and nurses transferred the babies and all of the cooling equipment to the MR scanner—in essence “bringing the whole NICCU down to the MRI suite.”

“The biggest challenge we initially faced was getting these fragile babies down to the MRI and back to the NICCU without compromising the cooling in any way,” says Wu. To achieve this, he developed a protocol that uses a huge battery—large enough to run two refrigerators. The battery provides portable power to cycle cold water through the cooling blanket that cocoons the infant.

The MRS imaging enabled the team to map what was happening biochemically in the brains of the infants while they were undergoing therapy. Researchers measured the concentrations of key molecules involved in the use and storage of energy, neurotransmission and oxidative stress.

Their findings showed that neuroprotection is achieved by realizing a specific balance between energy metabolism and neurotransmission. So far, the team has assessed more than 50 infants.

“We hope to obtain a better indicator of the child’s prognosis,” says Wu, whose interest in brain-temperature measurements laid the foundation for the research program. “Our goal is to categorize the degree and extent of brain injury, in order to better customize individual treatments and improve outcomes for these babies.” 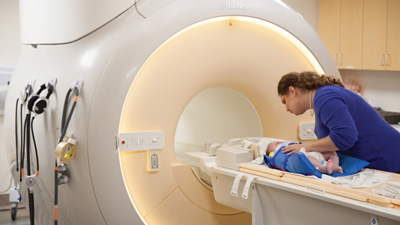 Jessica Wisnowski, PhD, and an infant at the MRI scanner

“But there is more that we can do,” says Wisnowski. “Hypothermia is a first step, and with it we have been able to almost double the chance of a healthy outcome for newborns with HIE. However, about half of infants with HIE don’t adequately respond to therapy. Although we know hypothermia helps, we don’t fully understand how it helps or how best to aid those babies for whom hypothermia isn’t enough to alleviate their brain injury.”

Wu and Wisnowski are co-investigators on a new multisite study evaluating the use of a drug called erythropoietin (EPO) along with hypothermia. Though perhaps better known as a performance-enhancing drug banned from sports, EPO is a naturally occurring hormone secreted by the kidneys. Its function is to regulate red blood cell production.

EPO is frequently given to newborns to treat anemia of prematurity, and research has shown that it may also have neuroprotective effects. CHLA is the only institution in Southern California participating in this new trial.

In addition, CHLA researchers are working to develop a better understanding of hypothermia’s impact. This could allow for a more tailored approach for its delivery, foster the development of early biomarkers, and direct additional neuroprotective therapies toward babies who are most likely to benefit.

“Most of us who devote ourselves to medicine do so for a reason,” Wisnowski adds. “Before my mother passed away suddenly in 2014, she had spent more than two decades as a special education aide for children with neurodevelopmental disabilities—some of whom were born with HIE. Each day, I try to honor her legacy and our shared passion by helping to get us one step closer to ameliorating one of the most common causes of cerebral palsy.”