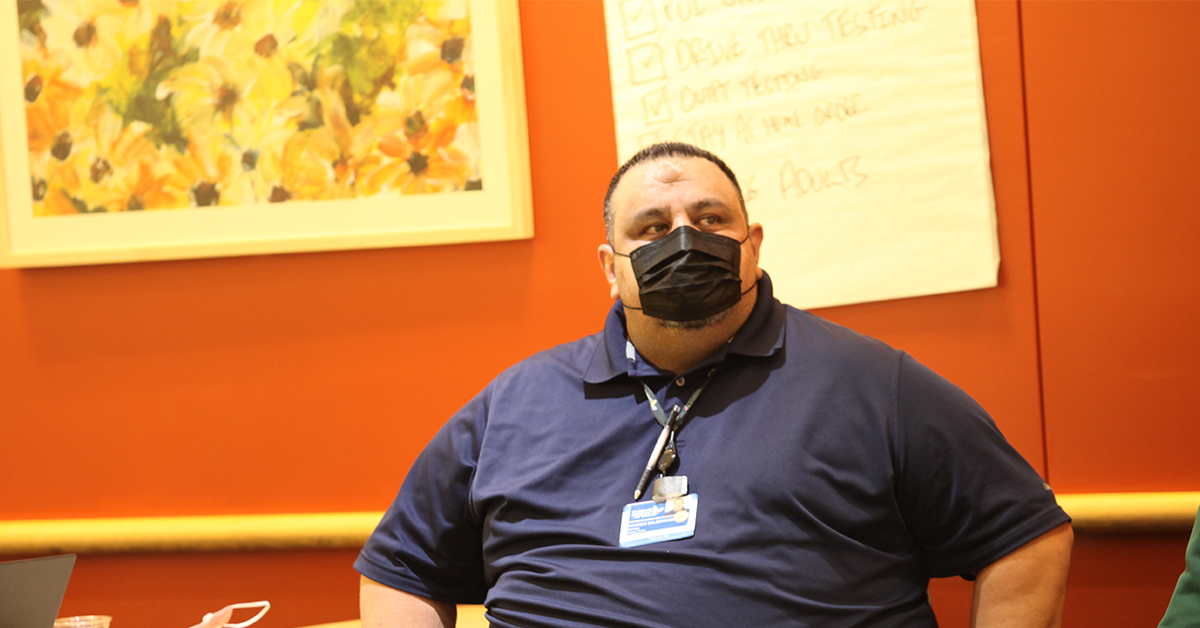 In the new Wild West of procuring hospital supplies, CHLA Supply Chain team members Ricardo Balderrama and David Billings find ways to get doctors and nurses what they need.

“When this all went down, everybody had a friend who knew somebody who could get some masks,” says David Billings, day-shift supervisor for Distribution Services at Children’s Hospital Los Angeles.

It tells you how long the COVID-19 pandemic seems to have been with us when those in the thick of it are starting to tell back-in-the-day stories from, well, February. It was a time, according to Billings, when acquiring personal protective equipment could be a bit grimy.

The item in play was invariably masks, with demand overrunning supply as many mask-making factories in China were sidelined by a shutdown in manufacturing. That created an opening for dirty dealing by anyone professing to have connections to a mask maker.

“I’d just follow leads,” says Billings, who is tasked with keeping every floor of the hospital stocked with sufficient supplies. “A lot of them didn’t work out. They’d say, ‘We want to donate,’ and then you’d hit them up and they’d say, ‘Oh, we’re not donating, we’re selling.’”

“A mask that we normally pay 50 cents for, they were trying to charge us up to $10,” says Supply Chain Manager Ricardo Balderrama, who oversees the work of Distribution Services along with Shipping and Receiving.

Eventually, the team found a legitimate mask provider, the same vendor that provides a lot of the hospital’s marketing merchandise. “It wasn’t just Joe’s Mask Company, you know what I mean?” Billings says.

A shock to the system

While the scramble for masks has since eased some, the rationing of essential supplies caused by the collapse in their availability has brought a shock to a system that had always delivered in abundance.

“If we asked for six cases, we got six cases,” Billings says.

Now instead of ordering supplies, CHLA receives a designated allocation so that every hospital gets a portion. In January, the hospital stocked 1,105 cases of surgical masks; in February, 636; in March, 382; and most recently in April, 191.

“Before, nurses would go into a patient room, put on a mask, come back out and throw away the mask,” Balderrama says. “A nurse could use 15 to 20 masks a day. Now we give everybody a mask as they come in and they’re asked to keep it on all day if it’s still usable—not soiled or torn.”

Before the onset of the coronavirus, clinicians at CHLA would typically go through 10,250 masks a day. Today it’s about 3,800. “We’re still conserving quite a bit because we don’t know how long this is going to play out,” Billings says.

Expect excess to be another casualty of COVID-19. The supply team is starting to recalculate its established numerical thresholds, called PAR (periodic automatic replenishment), the set quantity of an item that must be on hand at all times. Once the volume of the item falls below PAR, it gets restocked.

“It goes to show you that we didn’t need to have a PAR of 15 for an isolation gown,” Billings says. “We only needed eight.”

Heart of the matter

After having to turn quickly from indulgent to frugal, Distribution Services wants to ultimately settle on prudent and safe for everyone at the hospital.

Another effect of the pandemic has been to shine a light on the indispensability of the Supply Chain team members, who have seen their relatively unglamorous job of ensuring doctors and nurses have the materials to conduct patient care gain a bigger profile.

“You get people saying, ‘We thank you so much for what you guys are doing,’” Billings says. “Under the current circumstances, you realize a little bit more how important you are.”

“We’re usually in the background, and I’m OK with that,” Balderrama says. “But if we’re not here, you’re really going to feel it in two or three days because you won’t have supplies. You’re not going to be able to function.”