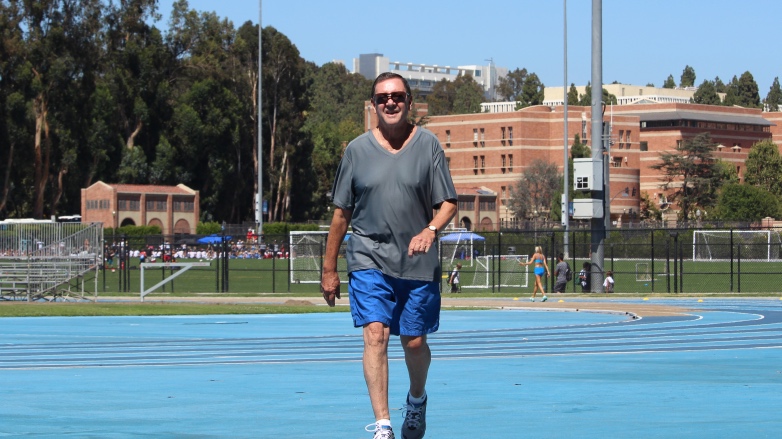 CHLA physician Dan Thomas, a former standout collegiate miler, drew on his history as a runner to help him overcome a near-fatal onset of Guillain Barré syndrome.

Doctors do the darndest things. Take the one who walked right up to Dan Thomas, MD, at a lecture, got into the ready position, and proceeded to perform several squats as Thomas watched, puzzled.

“Dr. Thomas,” his squatting colleague said upon returning to upright, “I had Guillain Barré three years ago, and I just wanted to show you that if you work hard enough, you can get better.”

Ohhh, so it was about that, Thomas thought. It was a nice gesture, and from his wheelchair the Children’s Hospital Los Angeles gastroenterologist offered thanks. Thomas could hardly touch his finger to his chin, so he couldn’t see far enough out to imagine ever doing squats. He was merely on a nice excursion out from his hospital room, a break from the tedium of rehab and a chance to join with his peers.

The guy was right, though. Thomas would work hard, and as a result would get better. But when the time came for a public demonstration of how far he had come, a set of squats would look small-time next to what he set out to do.

Dan Thomas knew his body well and this wasn’t one of its usual responses. A middle-distance runner on UCLA’s 1966 national championship-winning track team, he had once raced against Jim Ryun, considered the greatest of all American milers. It was against Ryun that Thomas ran his fastest mile ever: 4 minutes, 9 seconds. His body had never failed to overachieve, until here, leaving a pediatric gastroenterology and surgery conference, when he found that he could hardly get down a flight of stairs.

He managed to make it to the bottom and get on home, but his wife saw he struggled to walk. She asked what he thought was wrong. Thomas said it could only be one of two things. “Either I’m very, very tired and have just been working too much,” he told her, “or I have Guillain Barré.”

She replied the way most would have: You have what?

Pronounced gi-yan bah-ray—with a hard g—it sounds like something that might be served on a plate of fine cheeses. But don’t be deceived by the silky French phonetics. Named for the two physicians who identified the disease in 1916, Georges Guillain and Jean Alexandre Barré, Guillain Barré syndrome is a destructive autoimmune disorder in which the body’s immune system mauls the nervous system, damaging the nerves’ protective wrapping—called sheaths—and disrupting their ability to convey signals to the brain. The paralyzing effects are felt first in the legs and, in the worst instances, can rise upward and overrun the entire body.

Thomas could feel the paralysis ascending. His wife ran him to the emergency room at USC Verdugo Hills Hospital near their home in Glendale. An all-night workup—spinal tap, MRI, blood draw and ultimately a decisive electromyogram, which tests nerve conduction—led to the diagnosis he had surmised at the outset. He had Guillain Barré.

The illness came on all of a sudden, but it did have a precursor. Guillain Barré usually emerges after a bout of flu or a respiratory infection, and Thomas had picked one up on a cruise to Alaska that he and his wife had taken.

“I didn’t feel good,” he says. “I just felt really tired. This went on for about six weeks before I developed signs of Guillain Barré. In actuality, I had a classic course and case.”

Classic but extreme, as it trampled his nervous system. Every muscle was immobilized. He couldn’t move and couldn’t eat, and on his third night in the ER when he couldn’t breathe, the team at Verdugo called an emergency code on him.

“I remember the anesthesiologist whispered in my ear, ‘You’ll be OK. I’m going to put you on a ventilator,’” Thomas says. “She knew I knew what that meant.”

It meant that at his age, under those circumstances, there was a 50-50 chance he wouldn’t wake up.

A few days later, Thomas came out on the better end of those odds, awaking to find he had been relocated to the neurology ICU at Keck Hospital of USC and started on intravenous gamma globulin, an infusion of a powerful pool of antibodies that can disable the kind of inside job that occurs with Guillain Barré, when the body feasts on itself.

Thomas spent two weeks in ICU, paralyzed and unable to breathe or eat without mechanical support. He overheard the pessimism of the medical personnel who circulated around him, questioning whether he’d survive, and if he did, whether he would walk again.

But a half dozen therapists were assigned to prevent that outcome, and when Thomas denied their  request that he try to walk to the door and back, the most senior among them took his wife outside and let her know that time was short. If in two weeks after the disease strikes, a person can walk a short distance, even with assistance, the prognosis for a recovery is far better.

When his wife relayed the information, Thomas’ competitive instincts were engaged. He had nearly run a 4-minute mile, back when that was the mystical threshold for milers. You don’t think that body still had some magic in it? Clear a space and stand him up!

“You get the therapist back in here and I’ll walk,” he demanded from his bed.

Two therapists took one leg, two another, and one more stood in front and another behind. “And another person to spot me just in case I was going to go down,” Thomas says. “It took six people to have me walk the 20 feet.”

As tortured as it was, it marked the start of 2,000 hours of physical therapy over the next two-plus years, as Thomas tried to revive his muscle movement. A trio of therapists rotated daily visits to his house, while he had a caretaker tend to the obligations he couldn’t perform—bathing, dressing and eating.

After several months, he moved on to the care of Glendale-based personal trainer Manny Gonzalez, who oversees wellness programs at a local hospital. Gonzalez put Thomas through rigorous whole-body exercises—push presses, battle ropes, ball slams, push-ups, deadlifts, low planks, high planks, agility ladders. “Literally, everything I asked him to do, he would do,” Gonzalez says. “He’s a gamer.”

Thomas’ athletic background helped. He was used to doing scheduled numbers of sets and following orders, and he began to show gradual improvement. When he told Gonzalez that he had run the mile in college, Gonzalez set the target, telling Thomas, “All of our physical therapy is going to get you to a point where you can run a mile.”

Again with that headwind.

On a warm day in August 2015, back in his old habitat at UCLA, Thomas wasn’t feeling sentimental; he was feeling annoyed. This was the day Gonzalez had promised him. His recovery was culminating in a mile run—and he was going to do it in less than 10 minutes. When you’re 68 and you were nearly felled by Guillain Barré, 10 is the new 4.

But he had forgotten to factor in the headwind. Yet there it was, right where he had left it a half-century earlier, gusting in his face down the backstretch. It was on the old track at UCLA where Thomas ran that searing 4:09 mile, a time he would never beat, not after tearing his Achilles tendon early in 1967, which turned him away from athletics and permanently toward science. Today he was at Drake Stadium, UCLA’s current track and field complex. A different venue, but the same headwind, perfectly preserved from 1966, like a remastered Beach Boys album.

“I never liked it and it was blowing that day,” Thomas says.

A convoy of friends and family ran with him as both an escort and a pace team. UCLA legend Rafer Johnson, an old track buddy, showed up to watch. Gonzalez, running beside Thomas, carried the stopwatch, and when he looked down after the first quarter-mile he saw Thomas had hopped out too fast and was on an 8:30 pace. He got him to pull off the accelerator and settle in for the next three laps, leaving some reserves for the final push as Gonzalez called out the time. 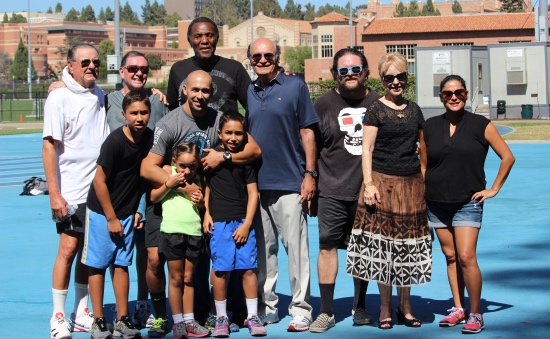 SQUAD GOALS Thomas (back row, second from left) at UCLA with his support crew of family and friends, including wife Judy (second from right);
son Steve (third from right); and trainer Manny (front row, with kids). He was also joined by his daughter, Melanie (not pictured).

Thomas marvels at the recollection, as if he’s experiencing the magnitude of it a second time, and says in a near whisper, “I ran a mile.”

That he did, in 9 minutes, 51 seconds, a two-year journey brought to heel with nine seconds to spare. “It took everything I had,” he says.

It was a climactic event, a symbolic, thrilling, fatiguing, full-throated, arms-raised-overhead, undisturbed triumph. Thomas was never going to regain all his strength, but in just shy of 10 minutes he had recovered a large share of his sense of self. He couldn’t get any closer to whole, though, until he filled in one last vacancy, one that his doctors asked him to leave be.

“They said I didn’t have to go back to work,” Thomas says, “didn’t have to try to prove anything to anybody. But I said that’s the way I’m made. I do have to do that.”

He had to get himself recertified in pediatric gastroenterology as well as pediatric liver transplant. Oddly enough, the gateway credential was his driver’s license renewal. Once he saw that he could drive himself to and from work safely without his wife’s assistance, the way was clear for him to return.

When he returned to CHLA in January 2016, some people and protocols had changed, and he had to make some concessions to the aftereffects of his illness. He has residual sensory loss in his hands and fingers, which rules out doing procedures. Tabletops, coffee cups, faces—everything feels coarse, like sandpaper, he says. “It’s annoying—very annoying. Every day I wish I would wake up and it wouldn’t be like that.”

Now 71, he couldn’t take on his old role as division head; the workload was too great. But he did reassume the directorship of the hospital’s Liver Transplant Program, and his ability to engage patients and mentor young colleagues never lapsed.

“I missed just being able to contribute,” Thomas says. “That’s the thing that’s most meaningful to me, knowing that somehow you have an impact and you make a difference in people’s lives, both the patients and the people you work with.”

He thinks his physical recovery has leveled off. The ongoing therapy sessions are now aimed at maintenance.

“I have some deficits that will always be there,” he says. “I have to think about one step after the next so I don’t, to be honest, fall over or have an embarrassing situation. That’s the way my life is now, but that’s OK.”

There was that doctor who had it, the one who approached Thomas in an auditorium at USC when he was still an inpatient, and abruptly knocked out a few squats to prove that recovery was possible. Thomas hasn’t seen him since, but if he does, he’ll have something to show him in return. Just give him 10 minutes. Maybe a little less.