After Scoliosis Surgery, Junior Olympian Goes for Her Goals 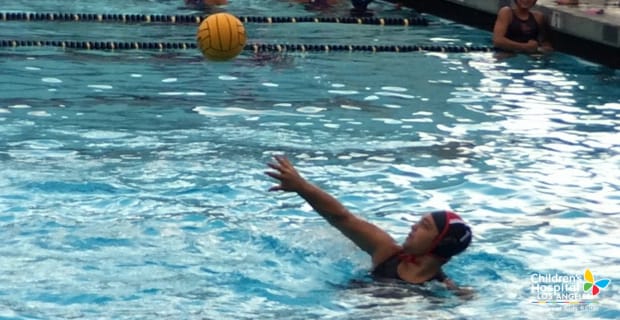 Thirteen-year-old Juliette Clark is spending a lot of long days at the pool lately. But she’s not just soaking up the summer sun—she’s getting ready for the National Junior Olympics in water polo. That would be an exciting prospect for any young athlete, but for Juliette it has special meaning. After all, it’s Scoliosis Awareness Month. And just 18 months ago, a doctor told Juliette that scoliosis surgery would end her ability to play any competitive water polo, let alone the Junior Olympics. “If that had happened, I would have been really sad,” Juliette says. “I really love water polo.”

A soft-spoken teen who also plays the piano and cello, Juliette (called “JuJu” by her family and friends) was diagnosed with scoliosis in November 2013, at age 11. Her spine was shaped like an “S,” with two, 50-degree curves that quickly progressed to nearly 70 degrees. After meeting with a local surgeon, though, her parents, John and Manya Clark, were perplexed. The surgeon told them

Juliette would no longer have the flexibility to play competitive water polo and suggested waiting until the following summer to have the surgery. “We had just gotten a pretty devastating diagnosis, and our plan of action was to wait for it to get worse?” Manya says. “It didn’t make sense. Seeking a second opinion, the Clarks made the 70-mile drive from Orange County to see David L. Skaggs, MD, at Children’s Hospital Los Angeles. Skaggs is chief of the Children’s Orthopaedic Center at CHLA and directs the Children’s Spine Center, a world-renowned pediatric spine center. A former collegiate athlete, Skaggs has enabled many of his patients to return to elite youth sports. He felt confident Juliette could continue to compete. “For a lot of kids, sports are a big part of their sense of self-confidence,” Skaggs says. “My philosophy is that it’s better a broken bone than a broken spirit, because I know I can fix a broken bone.”

On Feb. 4, 2014, Juliette was wheeled into the operating room at CHLA for spinal fusion surgery, which involves inserting metal instrumentation to straighten the spine and then fusing it in place with bone grafts. 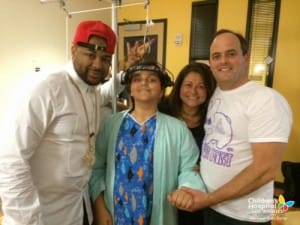 Juliette and her family with The Dream.

But during surgery, something happened: Once her spine was straightened, it stopped working. It’s a risk that comes with spinal fusion, and it could have meant permanent paralysis. Fortunately, Skaggs and his team are prepared for such emergencies. Skaggs immediately removed the rods, restoring Juliette’s spine to normal functioning. He then implemented a new plan. With her parents’ consent, he screwed a ring, called a halo, into Juliette’s skull. The halo attaches to a weight-and-pulley system that gradually “stretches” the spine straighter over time. Juliette spent the next week at CHLA attached to the system, with up to 30 pounds of weights pulling on her head. “The worst part was not having the freedom to get up whenever I wanted to,” she says. “But my family was there the whole time. It wasn’t, like, really really bad.” She even had fun, doing arts and crafts in the Teen Lounge and participating in a songwriting workshop with R&B songwriter The-Dream, who has written songs for Beyoncé and Rihanna. 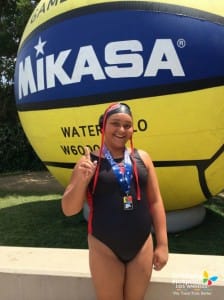 After eight days, Juliette’s spine had straightened to a more mild 30 degrees. Skaggs then performed a second surgery, removing the halo and inserting rods to solidify the correction. Although there’s still some curve in her spine, it’s not noticeable. She has no pain, and the surgery has prevented any progression, Skaggs explains. Seven weeks later, Juliette was back in the pool. By July 2014, she was scoring goals with her water polo team—and earning a gold medal at the National Junior Olympics. Now she’s on a new team, going for a second gold. In fact, she’s playing better than ever. “I feel much more comfortable moving in the water, and that allows me to play more aggressively,” she explains. Juliette, congratulations! We wish you all the best as you go for your goals—both in and out of the pool.