Why Co-sleeping Can Do More Harm Than Good

Co-sleeping or bed sharing with an infant has become a topic of discussion in the United States, most recently in KSPR’s (ABC News affiliate) coverage of an infant death in Missouri.

Co-sleeping is defined as parent(s) and infants sleeping together in an adult bed. Although a seemly controversial practice in the U.S., co-sleeping or bed sharing remains the most common sleeping arrangement in a majority of cultures around the world.

Experts believe that co-sleeping can do more harm than good. In this post I will share the risks and alternatives of co-sleeping to help new and current parents feel more informed to make the appropriate decision for their family. 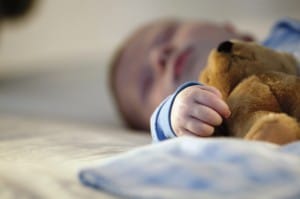 What is Being Said About Co-Sleeping at a National Level

If you have a newborn infant and are trying to make the decision whether to co-sleep or not, this is what is being recommended:What is Being Said about Co-Sleeping at a National Level

Why Co-Sleeping Can Harm Your Baby

I am a Lactation Consultant in Children’s Hospital Los Angeles’ Institute for Maternal-Fetal Health and a strong advocate for breastfeeding. Yet, the overwhelming majority of research opposes co-sleeping, even though it can facilitate breastfeeding. Safety concerns were the number one reason cited in the research. These are the safety concerns of physicians, healthcare professionals and parents:

Other concerns with co-sleeping involve the delayed development of infant independence and sleep issues. For example, an infant who falls asleep with its parents in the same bed has been observed to have more sleep problems associated with shorter and more fragmented sleep.

The Best Sleeping Arrangement for You and Your Infant

The AAP recommends that infants sleep in close proximity to their mothers but sleep on their own sleeping surface like a crib, bassinet or cradle to avoid safety risks, injury or even death. This sleeping arrangement is the best of both worlds, both to aid in breastfeeding success and keep the newborn infant safe. There are bed attachments called bedside sleepers, which can accommodate the recommended sleeping arrangement. Continue reading to find out more.

A Safe Alternative to Co-Sleeping 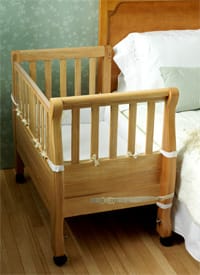 Why Some Believe in Co-sleeping, Despite the Risks

While there are reasons that have been reported to support co-sleeping such as cultural, social and psychosocial reasons, the most cited reason to co-sleep is that it helps facilitate breastfeeding. Aside from actual research that has been done relating breastfeeding with co-sleeping, many of the other reasons are personal and not scientifically proven as beneficial to the infant. Remember that a bedside sleeper is a safe alternative.

After reading this post I hope this helps you make an informed decision on the preferred sleeping arrangements for you and your newborn baby. Please feel free to send in questions or comments as they come up related to this topic, in the comments section below.

Bed Rest for You and Your Unborn Baby
Pregnancy Complications: Steps to Take for Expecting Moms
Ten Myths and Facts about Breastfeeding