The Choking Game: A Popular but Deadly Fad

Reading about the increasingly popular choking game, I had a sudden flashback memory of a game I once saw at a slumber party when I was a preteen. Girls would intentionally hyperventilate, then someone behind them would give a strong hug around the abdomen causing a momentary dizzy spell. I didn’t take to it and never tried it again. 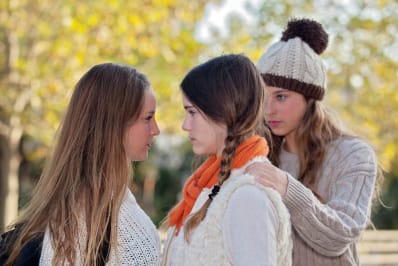 The choking game has recently gained new popularity via social media with hashtags like #passoutchallenge and #thechokinggame. It also has become more deadly with kids using ligatures like belts, scarves, shoelaces, dog collars and ropes around the neck to suffocate and cause fainting. The brain is starved of oxygen, and then when the adrenaline kicks in, there is a momentary rush. The most common age for participants is 12, an age when children are susceptible to peer pressure and do not consider the consequences of risky behavior. The next most-common ages are 13 and 14, and 89 percent are boys.

Looking through the information available on the Internet, I came across a story of a Utah detective investigating the deaths of four young people, who noted that participants today have “taken it up a notch” through the use of these nooses, which can cause suffocation. Also, I found another version of the game on social media. It showed laughing preteens pushing against the chests of others, causing them to faint and fall. One child crumpled and fell against a concrete curb, while the laughter continued.

The nonprofit organization Games Adolescents Shouldn’t Play (GASP) estimates there have been 900 deaths from the game in recent years, and states that many more deaths may not have been reported. Some suicide deaths may have actually been victims of this game as well. The Centers for Disease Control and Prevention (CDC) warns that the game can escalate from suffocation to death in less than three minutes.

To increase the peer pressure to join in, the game has many cool-sounding names: Space Monkey, Space Cowboys, California Choke, the Dream Game, Cloud Nine, Purple Hazing, Purple Dragon, Airplaning, Flatlining, Pass Out, Roulette and the Scarf Game. Parents should be aware that if a child is talking about such games, they need to take quick action.

Signs a child might be involved in the game:

What to do if you suspect your child is engaging in this dangerous game*:

The CDC’s advice to parents is to be open and honest. Parents need to arm their children with knowledge and give them the skills and information to say no to this deadly game.

*Courtesy of the Centers for Disease Control and Prevention