In my experience as nurse, I've seen, firsthand, the health risks associated with teens text messaging too frequently.

These can include sleep deprivation, carpal tunnel syndrome, visual changes, headaches. It's also possible that the psychological health of a teen can be impaired, as well as the development of their hand-eye coordination and communication skills.

And...not that long ago, I found myself in the situation many parents of teens are facing right now, teen texting became very personal.  My 12-year-old son was text-messaging on his cell phone with a girl who was texting things like "I love you" well past his designated curfew of 9 p.m.

How did I handle it, personally?  I read the text messages, promptly determined they were inappropriate and called the girl. I explained to her that at the tender age of 12, she was in no position to tell my son she "loved him," and that the late night texting needed to stop. I also realized that, as a mom, and a nurse, it was time for me to start paying attention to the texting world, for my mental health, and my son's physical health. 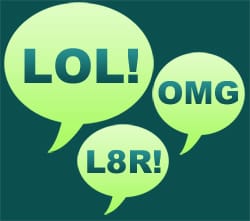 Technology has evolved over the past decades so that kids today are able to communicate with their peers instantaneously. As a parent of a teenager, or young adolescent, you might find yourself struggling to keep up with your children's fingers as they message their friends at lightning speed. However, learning how text messaging (or "texting") works, as well as what messages your teens are sending to each other, will help you better understand how to communicate with them.

How much are teens really texting?

According to trend trackers at The Pew Research Center in Washington DC, two-thirds of teens are more likely to text their friends rather than converse with them on the phone. The numbers have increased from 2008, when only 38% of teens sent daily texts. In 2009, that number rose to 54% and is most likely continuing to rise. The same study found that the average number of text messages sent each day by teens is 100, which results in an average of 3,000 texts sent per month. Obviously, this is a form of communication that isn't going away anytime soon.  So parents like me have to pay attention.

Why is text messaging so popular among teens?

Texting offers a degree of connection with friends; they ask about homework, make plans and generally keep in constant contact. At the same time, however, text messaging can also be a great way for parents to keep in touch and monitor what their children are doing without being obtrusive. Teens are more likely to respond to texts that facilitate short, quick responses rather than answering a phone call.

And since many parents have Smartphones of their own, they needn't feel limited by the use of their thumbs!

For years, teens have been asserting their independence as they mature into adulthood by communicating with friends. This trend started with telephones, which progressed to e-mail and then instant messaging with the advent of Internet communication. The evolution of cells phones has allowed text messaging to play a huge role in how teens interact with one another today. While the technology itself might be unfamiliar to parents, the emotions and issues their teens are experiencing are still the same ones adults faced at one time.

The shorthand used by many teens when they text often appears to be a language of its own. The shorthand originated as a way to collapse words into smaller packages to speed and ease texting activity but can also be used by teens as a way to maintain privacy by preventing adults from deciphering their "code."

Luckily for adults, however, the Internet can work to a parent's advantage by providing useful tools and information online. For example, a Google search of the terms "text message translator" results in numerous links to multiple websites that allow parents to type in a phrase like, " letz MEt aftR d gAm 4 <) & a mvie!" in order to find out that your child is planning to "meet after the game for pizza and a movie" with friends.

This 6-page tutorial by AT&T offers a great cheat sheet for parents (regardless of their cell phone provider) including:

While it may be intimidating at first, just remember that texting is simply another form of technology. Once mastered, it can act as a means to bridge the gap between generations.

As with any element of parenting, moderation is the key. The biggest challenge is dependence and overuse. Setting limits and monitoring can help create a compromise for both parents and teens. To learn more about potential health hazards associated with too much texting, as well as specifics about setting boundaries, read my follow-up post, Teens & Texting: Setting Boundaries.