If you are a smoker, you should know there is no risk-free level of exposure to tobacco smoke. In adults, secondhand smoke can cause serious cardiovascular and respiratory diseases, including coronary heart disease and lung cancer.

In pregnant women, secondhand smoke has been shown to cause low birth weight as well as a host of other issues for the child. Basically, when you smoke around your children, they are smoking too and face the same (if not worse) health risks you do.

Youth exposed to secondhand smoke at home are 1 ½ - 2 times more likely to start smoking than those not exposed to this behavior.

What is secondhand smoke and how is it harmful?

Second hand smoke is a combination of the smoke from a burning cigarette and the smoke exhaled by a smoker. Also known as environmental tobacco smoke (ETS), it is especially harmful to young children and can cause disease and premature death in adults and children who do not smoke.

California has some of the strictest laws against smoking in the nation … and for good reason. There are more than 4000 chemicals in tobacco smoke of which at least 250 are known to be harmful and more than 50 are known to cause cancer. [Source: LungsUSA.org]

A person's risk of developing cancer from secondhand smoke is about 100 times greater than from outdoor cancer-causing pollutants with more than 3,000 non-smokers to dying of lung cancer each year. [Source: LungsUSA.org]

Who is at risk?

Although inhaling secondhand smoke is dangerous to everyone, fetuses, infants, and children are at most risk because it can damage their developing organs, such as the lungs and brain.

Secondhand smoke is responsible for between 150,000 and 300,000 lower respiratory tract infections in infants and children under 18 months of age, resulting in between 7,500 and 15,000 hospitalizations each year. 430 sudden infant death syndrome (SIDS) deaths in the U.S. annually result from secondhand smoke.

In infants, ETS often attributed as a cause for sudden death and is listed as a cause for more than 600,000 premature deaths a year. 31 percent of the deaths attributable to secondhand smoke occur in children. [Source: LungsUSA.org]

Let's take a closer look at the specific risks children face when exposed to secondhand smoke in ...

Maternal, fetal, and placental blood flow change when pregnant women smoke, although the long-term health effects of these changes are not known. Some studies suggest smoking during pregnancy can contribute to the occurrence of birth defects such as cleft lip or palate. Smoking mothers produce less milk and their babies tend to have a lower birth weight. Maternal smoking also is associated with neonatal death from SIDS, the major cause of death in infants between the ages of one month and a year. 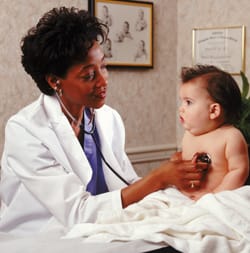 Exposure to ETS decreases lung efficiency and impairs lung function in children of all ages. It increases both the frequency and severity of childhood asthma. Secondhand smoke can aggravate sinusitis, rhinitis, cystic fibrosis and chronic respiratory problems such as cough and postnasal drip. It also increases the number of childhood colds and sore throats.

In children under two, ETS exposure increases the likelihood of bronchitis and pneumonia.

Exposure to ETS increases both the number of ear infections a child will experience, and the duration of the illness. Inhaled smoke irritates the eustachian tube, which connects the back of the nose with the middle ear. This irritation can cause swelling in the middle ear and create an obstruction which interferes with pressure equalization, leading to possible pain, fluid and infection.

Ear infections and middle ear fluid are the most common cause of hearing loss in children. When they do not respond to medical treatment, the surgical insertion of tubes into the ears is often required.

Children of mothers who smoked during pregnancy are more likely to suffer behavioral problems such as hyperactivity than children of non-smoking mothers. Modest impairment in school performance and intellectual achievement has also been demonstrated.

You can take the following measures to ensure that your children are living in a smoke-free environment.