Summer is around the corner and for many kids this is a time for outdoor barbecues, picnics and other outdoor activities involving food and fun. I remember backyard barbecues, picnics in the park or cookouts at the beach during the summer when I was a kid. We said goodbye to summer and hello to vacation! Sharing this fun with friends and family gave me many memories, but often, we were not only sharing fun, but also bacteria!

The bacteria were not invited to the party, but often showed up anyway. In fact, the Center for Disease Control and Prevention (CDC) estimates that every year, about 1 in 6 Americans (or 48 million people) gets sick, 128,000 are hospitalized and 3,000 die from foodborne illness, or what is commonly called food poisoning.

What is Food Poisoning?

Food poisoning can cause symptoms such as nausea, vomiting, diarrhea or fever. It is caused by eating food that has not been properly stored, prepared or cooked. There is a common misunderstanding that you can only get sick from bacteria found in improperly prepared or undercooked meats, but bacteria can be lurking on unwashed fruits and veggies too! I once got food poisoning from an unwashed watermelon. Slicing the unwashed fruit dragged the bacteria from the skin to the inside of the watermelon riding on the edge of the knife. 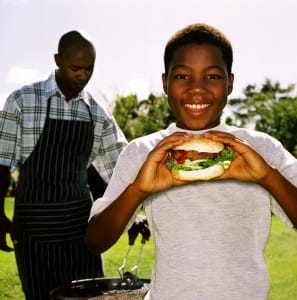 Potato and pasta salads are common at a lot of picnics and barbecues. Contrary to popular belief, store bought mayonnaise is not usually the culprit that causes spoilage because the eggs are pasteurized. Instead, bacteria seem to prefer homemade dishes that include eggs, potatoes as well as other ingredients.

Salmonella is the most common bacterial cause of diarrhea in food poisoning deaths. It is most often found in raw and undercooked eggs, undercooked poultry and meat, fresh fruits and vegetables.

Bacteria grow best between 40 and 140 degrees Fahrenheit. This is what is known as the “danger zone.” To keep food poisoning from ruining a perfectly good picnic, follow these simple tips. Use the same basic rules for preparing and serving food outside as you would inside your kitchen.

There are four basic principles that can help keep your picnics and barbecues safe and fun:

Follow these simple precautions and your summer parties will be filled with fun and great food, and you can avoid any trouble from that little microscopic party-crasher called bacteria!

PRINTABLE FOOD POISONING PREVENTION FLIER FOR YOUR HOME AND SCHOOL!

Refer to this simple guide for tips and principles on how to prevent food poisoning. This is a good flier to post on your refrigerator, family bulletin board or school cafeteria. Why not send it to friends and family too! 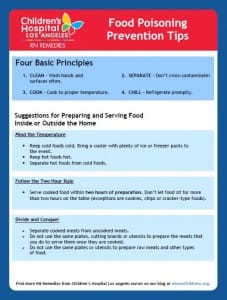