If you are like me, you are probably using those cute laundry pods to do your laundry. They are attractive and so easy to use! Plus they feel good to squeeze, like a water balloon! Since my child is grown up now, I don’t think much about kid-proofing my house, so I was very concerned when I read that these pods have become a poison danger to young children. 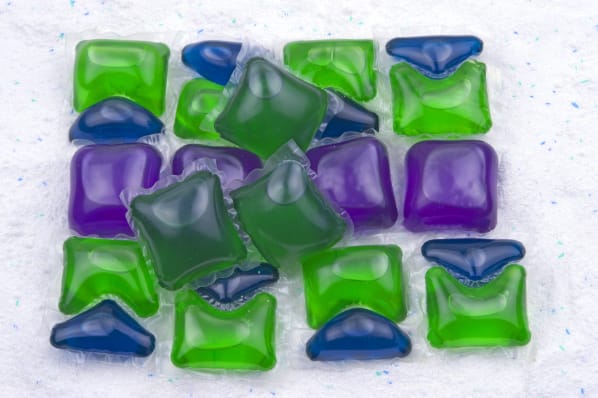 The Centers for Disease Control and Prevention has been tracking calls to poison control centers since the pods came on the market in 2010, and have been warning U.S. consumers about the dangers of these pods.

In August last year, a baby less than 1 year old found one the pods when his mom was momentarily distracted. He put it in his mouth and the soft gel surface of the pod dissolved, so the baby got the full amount in his mouth. He died as a result of the exposure.

Poison control centers have received over 3,000 complaints of children being exposed to the contents of these pods. In just one year:

All household products have a potential to poison and sicken children. When I was little, one of my preschool-age friends used to like to lick Comet household cleaner because she thought it was powdered sugar. It’s not a new problem, and many parents use childproof latches on cupboards containing household cleaning supplies. So are these pods any different? Yes, it turns out they are a bigger danger than most detergent products, because they cause more damage.

The Danger of Pods

Why exactly are pods more dangerous?

The CDC says many symptoms have been reported, and they have found that these symptoms are significantly greater than those of exposure to non-pod detergent.

I asked an expert from CHLA’s Emergency Department to weigh in as well.

“Even if there are no signs of burns or damage in the mouth but you think your child may have swallowed the liquid detergent, you should call 911 or take your child immediately to the emergency department,” says Calvin Lowe, MD, FAAP, medical director for the hospital’s Emergency Transport Program. “There might be damage in the esophagus even if there aren’t any oral signs.”

What Should Parents Do?

There was a spike in calls to the poison control centers when the pods first came onto the market. The number has leveled off as the public has become aware of the danger, but they are still a threat; the death I mentioned earlier happened in 2013, and the pods have been on the market since 2010. So, please tell your friends, families and neighbors with little children about this danger.

Manufacturers are being encouraged to use double-latch containers for the pods and also to consider different ingredients to make them less toxic if a child does get a hold of one. In the meantime, be sure to keep your children safe and keep these products out of reach or out of your home.

Avoid a Hit-and-Run: Pedestrian Safety Tips for You and Your Family
Barbecuing with Kids. Safety tips.
Bicycle Helmets: Getting the Right Fit
Bike Helmets: Finding the Right Fit
Bounce Houses: Risk of Injury for Kids
Car Seat Recycling and Safety Prevents Injury and Saves Lives
Dangers of Energy Drinks for Kids
Fireworks Safety: Tips for Parents
First Aid 101 for Parents
From Water to Fireworks: Here’s How to Keep Your Child Safe During the Summer
Grass Is Always Greener on the Other Side, but How Safe Is It?
Halloween Safety Tips by Children's Hospital Los Angeles
Halloween Tips for Kids with Autism Spectrum Disorders
Hazards of Leaving a Child in a Hot Car
Heat-related Illnesses: Know the Signs and How to Keep Your Child Safe
Hiking Safety for Kids: Expert Tips
Holiday Decorating: The Balance between Safety and Fun
Hot Days, Cool Water: Summer Safety Tips
How to Avoid Trouble in Toyland
Introducing the Safety Corner in the Family Pantry
Is Your Purse Hazard-Free?
It's Baby Safety Month: Should you use rear-face car seats?
Keep Your Child Safe from Household Cleaners and Chemicals
Laser Pointers and Eye Safety
Lead in Your Child's Candy
Look For Lead In Your Home
Preparing Your Family for a Disaster
Prevent a Head Injury...Move the Furniture
Prevent Dog Bite Injuries: Tips to Consider
Prevent Drowning and Falls: Childproofing Tips
Preventing Drowning Accidents: Christina's Story
Summer Safety: Personal Watercrafts
Water Safety: Hot Tubs, Ocean Swimming and Dry Drowning