How and When to Clean Your Child’s Ears

When I worked in pediatric primary care, one of the biggest ear concerns that I heard from parents was about the presence of wax in their child’s ears and how to clean ears. While earwax is not pleasant to look at, it’s harmless and good for your ears! Everyone knows that ears are responsible for allowing us to hear, but did you also know that the very inner part of your ear is responsible for maintaining balance? Ears serve a very important function for our bodies, so it’s important to take care of them. In this blog post, I hope to take some of the mystery out of ear care.

Anatomy of our ears 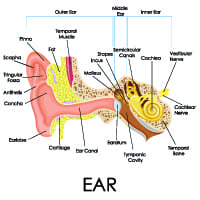 Before we dive in to how to properly care for your child’s ears, it helps to know how the ear is constructed. Ears are divided into three main parts:

Earwax, also known as cerumen, is produced in the ear canal. As I mentioned earlier, it is quite helpful! Earwax contains enzymes that help prevent bacteria and fungus from growing in the ear. It creates a barrier to protect the ear canal from water. Earwax also traps dust and dirt particles that enter the ear. Wax normally regulates itself by migrating from the inside of the ear canal to the outside on its own. Wax only needs to be removed from the ear for two reasons:

Do not put anything inside your child’s ear canal (this includes cotton swabs). Soft objects even like cotton swamps can puncture an ear drum. You can also push wax further toward the eardrum, causing it to clump together and block hearing. 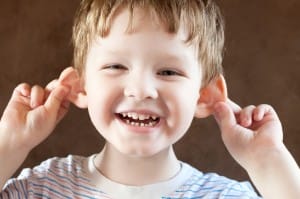 Here are helpful tips to use when it comes time clean your child’s ears at home.

There is an old saying that goes, “Never put anything smaller than your elbow inside your ear or your child’s.” It’s obvious this is an impossible action in itself, but the saying makes sense because you don’t want to cause ear wax build up or damage in your child’s ears. If you know of parents that use cotton swabs as part of their ear hygiene for their family, forward this blog post to them. Let’s keep ears clean and healthy.