Amber Beads: Pretty to Look at, But is it Safe?

When I decided to look into the question of amber teething beads for infants, I first searched the internet to see what popped up. Google produced a host of very pretty looking beads for sale for this purpose. As a lover of amber, coral and turquoise I can understand the appeal of these beautiful natural products. There is a certain fascination with ancient and natural remedies that is fashionable, but in this case, one look and I thought “choking hazard.” 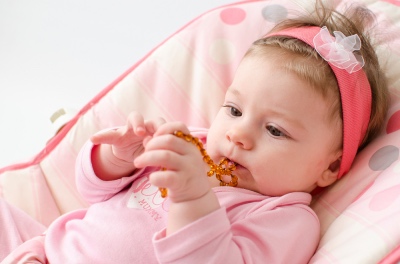 As a teacher of CPR for families, I usually tell the parents who attend to look at any item that is round as a potential choking hazard. In fact, I used to call cherries, marshmallows and any similarly shaped food item “chokers” to my baby daughter, and warned her never to put such objects in her mouth.

I then checked in with Calvin Lowe, MD, FAAP, medical director of the Alan Purwin Emergency Transport program at Children’s Hospital Los Angeles, about the use of amber teething beads in babies. Lowe pointed out that the American Academy of Pediatrics cautions against the use of any jewelry on babies. Suffocation, he noted, is the leading cause of death in children under 4 years of age. Strangulation is a potential hazard since the beads are often put around the neck of the baby as a necklace.

Upon looking further into the use of amber beads, I noticed that they are not in fact supposed to go into the mouth, but instead act to transmit a substance called succinic acid. The sellers of the beads claim that the succinic acid is activated by the body temperature of the baby and then enters via the skin to produce pain relief.

The claims are very broad to begin with, and include that this substance can decrease inflammation of the ears, nose, throat and respiratory system, support liver health, and act as a mood elevator with zero side effects. However, many pediatricians state that there is no evidence that succinic acid does any of these things.

Succinic acid is naturally occurring and safe to use in food in the right quantities. But, surprisingly I found that it causes skin irritation and is especially bad if it gets in the eyes.

“Succinic acid is used to regulate acids in foods, but in great quantities is a skin mucosa and respiratory irritant,” says Lowe.

If you are convinced that amber beads work and you do use them, we suggest:

Keep in mind that teething pain is transient and waxes and wanes as a new tooth emerges. Therefore, it is not even useful to chase such short-lived pain with pain remedies like Tylenol, teething beads or analgesic gels. In fact, pain medication and analgesic gels can be dangerous if there is an accidental overdose.

“The local anesthetic, benzocaine, is the active ingredient in analgesic gels, also known as teething gels. Benzocaine can reduce oxygenation in the blood and can lead to death,” says Lowe.

Teething can be uncomfortable for the baby and parents don’t want to see their child in any distress. So instead of using potentially harmful beads or mediations, here are some other treatments that we recommend: