Aggression and Impulsivity: How You Can Help Your Child

We all get emotional and perhaps say and do things we regret. I don’t think I’ve met anyone who hasn’t. The reason I bring this up is because I recently read a sad story about a teenager with no prior history of violence, who let his emotions and aggression take over his body and thoughts. During a soccer game, the referee gave him a “yellow card” for pushing another player. He then punched the referee in the head and the referee died from complications of brain swelling. As a result, the teen is now charged with homicide. The teen and the families affected will never be the same. Could his aggression and impulsivity have been prevented and helped at home? This story is an example of extreme pediatric aggression and impulsiveness. Because I can’t imagine what either family is going through, I thought it would be good to speak with Caroly Pataki, MD, child and adolescent psychiatrist at Children’s Hospital Los Angeles, about how parents can help their child deal with situations they feel are unfair, losing their temper and become impulsive in their actions. Dr. Pataki summed up her thoughts about the incident by saying, “After this type of situation the best thing we (parents) can do is to teach our children to recognize angry feelings before they reach their breaking point, even if we don’t think that our child would ever do something like that.”

What Causes Children to Be Aggressive and Impulsive? 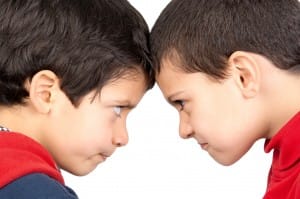 There are a few causes that get kids to act aggressively and do things without thinking. “Children are most likely to behave aggressively and impulsively when they feel provoked or if someone treated them unfairly,” shares Pataki. Aggression can range in severity and is often stirred up in competitive situations, like sports and events at school.

Pataki states that some children may be more susceptible to being provoked than others, including those with

Help Your Child Manage Their Aggression and Impulsive Behavior

All children, particularly “at risk children” listed above, can benefit from discussing how they would deal with certain situations that make them angry or upset, with their parents. Dr. Pataki suggests preparing your child so that he or she is ready to cope constructively when feeling upset. She recommends something called a “cognitive behavioral approach,” which includes discussion and role-playing. Here are some ways you can help you child with these feelings:

Children are more likely to deal with situations positively if they are ready and have practiced responses at home. Pataki shared more role-play situations you can practice at home with your child. They can help your child deal with siblings and other kids at school.

Some children who show extreme aggressive behavior may require treatment such as membership in an anger management group, cognitive behavioral therapy or medication to lessen aggressive and impulsive behavior. If you are concerned about your child, it’s important to speak with his or her pediatrician or a pediatric psychiatrist. They will decide on the type of treatment, whether it’s therapy, a specific school setting or a family intervention. It may prevent your children from harming themselves or someone in the future. I want to extend a special thank you to Dr. Pataki for helping me with this RN Remedies blog post. I certainly learned a lot from her expertise and I hope you did too.

ADHD and Your Child: A Q&A with One of Our Experts
The Forgotten Child