Is there a link between autism and air pollution? 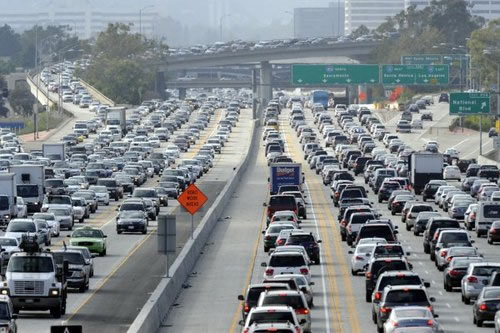 In Los Angeles, driving is more than a convenience; it’s a way of life. From the way we give directions (whatever you do, avoid rush-hour on the 405!) to the time we allot to get to dinner (be sure to leave by 5 for a 7 o’clock reservation), traffic is always center of mind. But could the hours you spend in gridlock, surrounded by vehicular exhaust and airborne pollutants, increase your child’s risk for developing autism?

That’s what Heather Volk, PhD, MPH, is working to find out.

• In 2011, Volk was the first researcher to link autism risk to air pollution—specifically the pollution emitted from vehicles. Her study looked at autism in children born to mothers who lived varying distances from a major freeway. She found that kids born to moms who lived within 1,000 feet of a major thoroughfare were twice as likely to have autism.

• Earlier this year, Volk turned to the MET receptor tyrosine kinase (MET) gene to study the interplay of genetics and environment in autism. She found that a functional variant of the MET gene and exposure to air pollution may interact to further increase the risk of autism spectrum disorder in kids.

So what does this mean?

“There have now been several associations between fetal exposure to air pollution and autism, but we are still working to understand this relationship,” says Volk. “Since autism is a heterogenous condition—meaning it’s influenced by both genetic and environmental factors—we need to understand how these influences work together and cause this disorder.”

Note: The NIH recently granted over $2M to Volk for further work assessing the association between prenatal air pollution exposure and the risk of autistic traits and cognitive delays. With this funding, she will look to see if such associations persist over time and if there is a “critical period” of fetal pollution exposure.