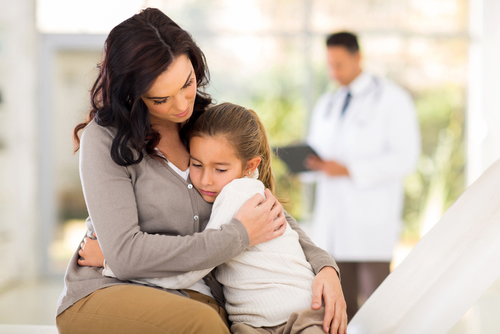 PTSD. Four letters we immediately associate with soldiers and horrific wartime tragedies. But unfortunately, posttraumatic stress disorder (PTSD) can affect anyone who has experienced a traumatic event—including children with serious medical diagnoses.

Called medical PTSD, this subgroup of the disorder can result from receiving a medical diagnosis and undergoing subsequent treatment (e.g. finding out that you have cancer and the routine visits to the hospital for treatment). To learn more about this devastating disorder in kids, we talked to Jeffrey I. Gold, PhD, director of the Pediatric Pain Management Clinic at Children’s Hospital Los Angeles (CHLA).

Dr. Gold, let’s start with the basics. What exactly are the symptoms of medical PTSD?

PTSD in general includes a cluster of symptoms, such as re-experiencing the traumatic event, avoiding reminders of the event, hyper-arousal, hyper-reactivity, being easily startled and negative changes in thinking and mood. Patients with medical PTSD share these same symptoms, but they are specifically the result of a traumatic medical situation.

Also, in medical PTSD, these symptoms aren’t restricted to the patient themselves. Parents and family members of the sick child can also exhibit posttraumatic stress symptoms as a result of the patient’s diagnosis or subsequent treatments.

How do you determine that young children, especially those that are nonverbal, are experiencing PTSD symptoms?

We can see that the affected children are more agitated, irritable, have an increased fear response and cry more. In the younger children—we see some as young as 2 months—we look at the behavioral symptoms, like mood and restlessness, as measured by their parents.

Do you diagnose these children with PTSD right away?

Even if the patient doesn’t have continuous symptoms for 30 days, it’s important to keep monitoring them because the intensity of the symptoms wax and wane. Medical PTSD is also a “triggering disease”; once you’ve shown the symptoms, you’re more likely to experience them again.

Do most of the children that you see progress on to have PTSD?

The majority, I’d say 70 percent, of the kids who come through the medical center have acute stress and their symptoms resolve within a month. But between 25 and 35 percent of the kids that come in will have persistent, chronic medical PTSD.

Have you found that medical PTSD affects a particular group of patients more than others?

Yes; in our studies examining PTSD and chronic pain, PTSD and retinoblastoma and PTSD in the PICU, we’ve seen correlations between PTSD and certain subgroups.

Specifically, in our collaboration with Lara P. Nelson, MD, a division of Critical Care physician, we examined 80 children aged eight to 18 years who were hospitalized in the pediatric intensive care unit (PICU). We found that younger children are at greater risk of developing posttraumatic stress symptoms, irrespective of gender.

In addition to patients developing acute and posttraumatic stress, parents and caregivers were also at risk for negative health outcomes.

What sort of long-term effects can PTSD cause in these children if left untreated?

A lot of people don’t understand that a serious medical diagnosis is like throwing a rock into a pond—it has a ripple effect into every aspect of life. This is especially true in children, as they are still developing many of their coping and behavioral skills. If left untreated, PTSD can have long-term effects on sleep, cognitive development, peer and interpersonal relationships, schooling and education, and on how emotions are regulated.

What interventions do you provide to help relieve the PTSD symptoms in children?

The most important intervention is to screen for acute and/or posttraumatic stress symptoms. Once identified, there are a variety of acute- and long-term interventions including medication, psychotherapy/counseling, and other developmentally-appropriate ways for children and adolescents to cope with the stress associated with a serious medical condition.

At CHLA, we have a variety of different therapies, such as medication, play therapy, talk therapy, music therapy and art therapy that help young kids to cope with, express and learn to manage their stress reactions associated with medical trauma.

Using Telehealth to Support Children on Home Mechanical Ventilation
How Stress, Anxiety Contribute to Youth Violence
Expert Advice on Staying Safe During the Omicron Surge
Spinal Fusion Surgery for Scoliosis as a Teen Allowed Kelly to Follow His Dream