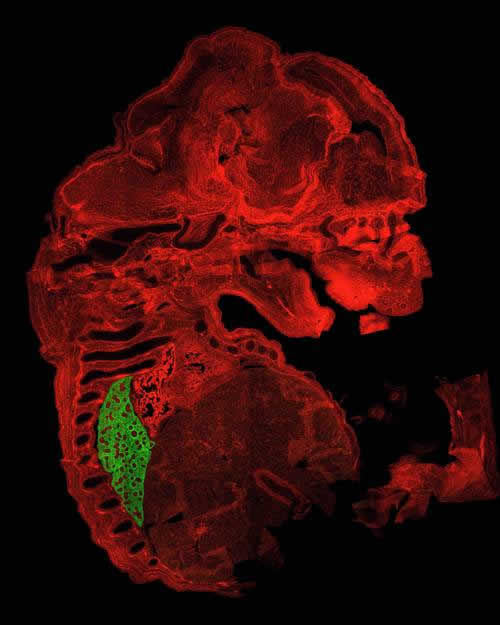 By uncovering the mechanism by which fibrous tissue cells in the lung multiply, researchers at Children’sHospital Los Angeles (CHLA), along with colleagues in Mexico and Canada, have identified a promising new approach for the treatment of pulmonary fibrosis.

Idiopathic pulmonary fibrosis (IPF) is a severe, chronic lung disease in which the rapid growth of fibrous tissue results in increasingly severe breathing difficulties and a high mortality rate. It also appears spontaneously and without a known cause.

Excessive signaling of the growth factor TGF-β is recognized as a central player in lung fibrosis, and its increased expression has been identified in both IPF patients and experimental models of the disease. However, in addition to its pro-fibrotic effect, TGF-β signaling is essential to aspects of other systems, such as appropriate immune response.

Therefore, complete therapeutic blockade of TGF-β pathway isn’t ideal, says the study’s principal investigator Wei Shi, MD, PhD, of the Developmental Biology and Regenerative Medicine research program at CHLA. “This is a very complicated signaling pathway, which promotes mesenchymal stem cell proliferation, while also acting as a tumor suppressant,” said Shi, who is also an associate professor in the Department of Surgery, Keck School of Medicine of the University of Southern California. “Our goal was to find a way to target specific cells that result in fibrosis without affecting other cells.”

Using a unique transgenic mouse model developed at The Saban Research Institute of CHLA, the researchers were able to manipulate TGF-β signaling in adult lung mesenchymal cells at selected stages of lung fibrosis.  They showed that the progression of fibrosis mediated by TGF-β was independent of early inflammatory processes during initiation of fibrosis – an understanding that is vital in designing therapeutic strategies to stop its progression in IPF patients.

Secondly, they identified a downstream gene called P4HA3 that is important to the overabundant collagen deposition associated with IPF. This gene encodes a component of prolyl 4-hydroxylase, a key enzyme in collagen synthesis. Inhibition of this enzyme was shown to reduce the TGF-β-stimulated collagen production in both cultured fibroblasts (connective tissue cells that produces collagen) and mouse models of lung fibrosis.

“Our data indicate that increased expression of collagen prolyl hydroxylase is one of the important mechanisms underlying the proliferation of fibrous tissue that is mediated by TGF-β. Inhibiting this enzyme appears to be a promising therapy to interfere with excessive collagen production and deposition in IPF patients,” Shi concluded.

This work was supported in part by NIH Grants HL109932 and HL068597, a California Institute of Regenerative Medicine Training Grant, and the Canadian Institute for Health Research.