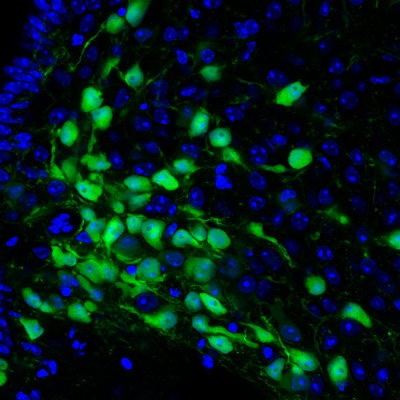 Neurons in the hypothalamus develop abnormally in Prader-Willi Syndrome

A study published in the journal Human Molecular Genetics by researchers at Children’s Hospital Los Angeles (CHLA) provides novel insights into the brain mechanisms underlying the insatiable hunger and subsequent obesity in patients with Prader-Willi syndrome.

Prader-Willi syndrome (PWS) is a rare genetic disease characterized by hyperphagia – a chronic feeling of hunger that, coupled with a metabolism that utilizes drastically fewer calories than normal, often leads to excessive eating and obesity in patients with the disease. It affects approximately 1 in 25,000 births about 350 to 400,000 individuals worldwide, and is recognized as the most common genetic cause of life-threatening childhood obesity.

Although much attention has been focused on the metabolic and behavioral outcomes of PWS, scientists still knew relatively little about the consequences of PWS on development of appetite-related brain pathways in the hypothalamus. This portion of the brain develops during neonatal life under the influence of both environmental and genetic factors. It has been suggested that, due to its importance in the control of eating and energy balance, early impairments of hypothalamic development may result in lifelong metabolic dysregulation.

“Our goal was to characterize the development of brain circuits involved in appetite regulation, using a mouse model for Prader-Willi syndrome. We specifically focused on the hypothalamus because it is the brain region critical for regulation of homeostatic processes such as feeding,” said lead author Sebastien Bouret, PhD, a member of The Saban Research Institute’s Developmental Neuroscience Program and an associate professor of Pediatrics at the Keck School of Medicine of the University of Southern California (USC).

Bouret and colleagues found that mice lacking Magel2, one of the genes responsible for PWS, display abnormal development of the brain connections that normally trigger satiation, telling the body it has gotten enough to eat. They also report that these neurodevelopmental defects are unlikely to involve endocrine factors – hormones that regulate things like metabolism, growth and development. Rather, the gene Magel2 itself appears to have a direct effect on axonal growth.

Based on previous findings showing a pivotal role for the metabolic hormones leptin and ghrelin in hypothalamic development, the scientists measured their levels in Magel2 knockout mice, comparing them to control mice.  They found that the knockout mice had normal levels of leptin and ghrelin, suggesting that the loss of Magel2 alone leads to the disruption of hypothalamic feeding circuits, an effect independent of the effects of those metabolic hormones.

This work was supported by the Foundation for Prader-Willi Research, the National Institutes of Health (Grants R01DK84142, R01DK102780, and P01ES022845), the United States Environment Protection Agency (Grant RD83544101), and the EU FP7 integrated project.