How “Self-Eating” Cells Protect from Starvation 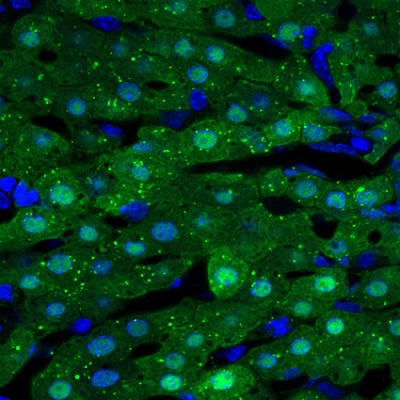 Recently, Yoshinori Ohsumi was awarded the 2016 Nobel Prize in Physiology or Medicine for his discoveries of mechanisms for a fundamental process called autophagy. Mutations in autophagy genes can cause disease, and disturbances in the autophagic process can lead to diabetes, cancer, neurological and other diseases.

But it can also eliminate invading bacteria and viruses, contributes to embryo development and provide fuel for energy and building blocks for renewal of our cells.

The word autophagy originates from the Greek words auto-, meaning “self”, and phagein, meaning “to eat”. It is the “self-eating” mechanism by which organisms, including human beings, degrade and recycle cellular components. Ohsumi’s discoveries led to a new scientific understanding of the importance of autophagy in many processes, ranging from how an organism responds to infection to – as in the case of CHLA’s Sebastian Bouret’s research – its role in an animal’s, or baby’s, adaptation to nutritional challenges.

“Autophagy is a process which allows cells to stay alive without nutrition, and is critical in providing nutrients if an animal is starving,” says Bouret, who is a scientist with The Saban Research Institute and associate professor of pediatrics with the Keck School of Medicine of USC. For example, at birth the trans-placental nutrient supply is suddenly interrupted, and newborn face severe starvation until supply can be restored through milk nutrients. Autophagy is one of the mechanisms that allow newborns to stay alive in this critical window immediately after birth.

For instance, Bouret explains, if a mouse doesn’t express the autophagy gene Atg5, it dies within a few hours of birth.  Autophagy is not only important during neonatal life: if the autophagy gene is removed in POMC neurons – which are neurons located in the brain’s hypothalamus that are important for feeding and weight regulation – the mice become obese and diabetic as they become adults.

Autophagy is responsible for degrading “bad” or misfolded proteins that trigger cell death. According to Bouret, if this process is disrupted, the result is abnormal brain development and function, again resulting in obesity and diabetes.

“If we can find a way to ameliorate the autophagic function, we hope to improve the function of the neuronal cells, which is abnormal in conditions such as obesity or type II diabetes” he says.