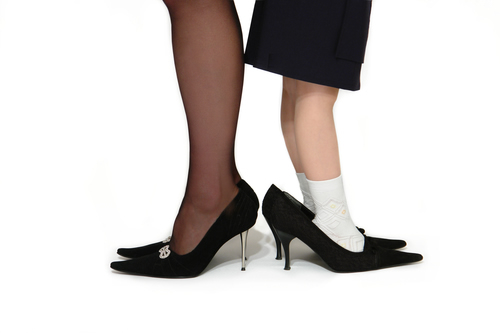 Between iPhone-toting 6 year olds and teenagers with online dating profiles, it seems as though kids are getting older, younger. But what if they actually are? Over the past 20 years, studies have shown that the rates of children starting puberty before ages 8 or 9 is on the rise.

“Puberty is already a time for adjustment in adolescents, but when pubertal changes happen in 7 year old kids, the effects may cause serious harm,” says Geffner, who is also chief of the Division of Endocrinology at CHLA. “Physically, early growth spurts may be detrimental to adult height and psychosocial issues can arise in young children who are not ready to cope with their rapidly maturing bodies.”

begins anywhere between the ages of 8-13, with boys starting an average of 2 years after girls. All of the developmental changes that take place are governed by a chain-reaction of hormones called the hypothalamic-pituitary-gonadal (HPG) axis.

To kick-start this process, gonadotropin-releasing hormone (GnRH) is secreted from the hypothalamus and binds to receptors in the pituitary gland. The pituitary gland then secretes luteinizing hormone (LH) and follicle-stimulating hormone (FSH), which communicate with the ovaries and testes. LH and FSH help regulate the menstrual cycle in women and stimulate testosterone production and spermatogenesis in men.

Precocious puberty occurs when the ovaries and testicles are prematurely activated. Specifically, in central precocious puberty, this activation is due to the early secretion of GnRH, which then stimulates the rest of the HPG axis.

Since 1981, physicians have been prescribing gonadotropin-releasing hormone agonist (GnRHa) to block GnRH from binding to its receptors in the pituitary gland and help reverse early sexual development. By breaking the signals of the HPG axis, GnRHa prevents the cascade of hormones that would initiate puberty.

Now, almost 25 years after it was first used, Geffner and colleagues examined both the immediate and long-term effects of temporary GnRHa therapy.

“We found that most girls with central precocious puberty went on to have menstrual cycles that were normal in both timing and duration,” notes Geffner.

They also found that GnRHa therapy doesn’t appear to cause polycystic ovary syndrome or have negative effects on bone mineral density or body composition.

“The next steps are to simplify the treatment without sacrificing its successes. To date, this has included the development of long-acting forms of GnRHa, including injections every three months and implants that last for a year,” notes Geffner. “Registries now exist to monitor the safety of GnRHa, as well as the timing of when the HPG axis returns to normal once the GnRHa medication is discontinued.”