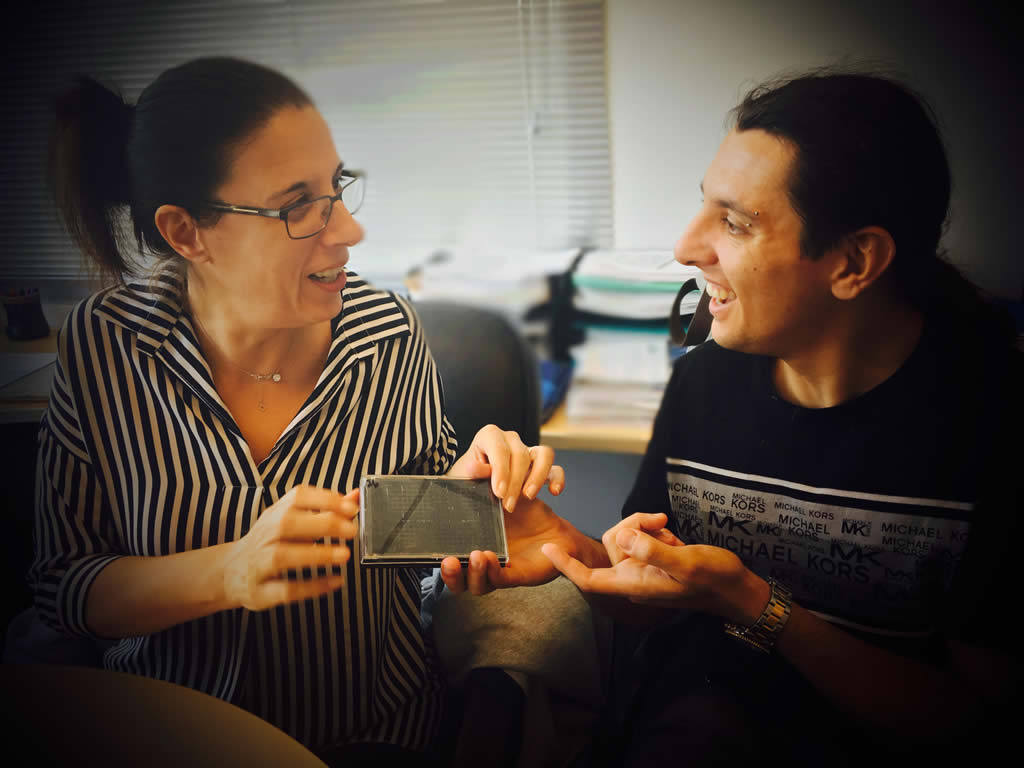 Kidneys work to constantly filter blood and remove toxins from the body. Conditions such as chronic kidney disease (CKD) are characterized by a reduced ability to perform this essential function. CKD incidence is growing and more than 1.4 million individuals depend on dialysis or kidney transplant for survival. Development of new treatments requires an understanding of the mechanisms of the disease progression, but scientists have not been able to accurately model kidney filtration in vitro – until now.

In a landmark study published in Nature Communications, scientists at Children’s Hospital Los Angeles demonstrate an in vitro kidney model that could change the course of research for diseases like CKD.

The kidney contains specialized structures called glomeruli. Within each glomerulus is a filtration barrier made up of two thin layers of highly specialized cells and a membrane that acts as a selective filter. As blood moves through each glomerulus, toxins and small molecules can pass through, while proteins and other important components are kept in the bloodstream. “This filtration process breaks down in patients with kidney disorders,” explains Laura Perin, PhD, who is co-senior author on the study along with Stefano Da Sacco, PhD. “But because we haven’t had a good in vitro model, we still don’t know the mechanisms of injury to the glomerulus in CKD.”

Dr. Perin and Dr. Da Sacco conduct research in the GOFARR Laboratory for Organ Regenerative Research and Cell Therapeutics in Urology along with co-director Roger De Filippo, MD, at CHLA’s Saban Research Institute. The lead author on the study was CHLA postdoctoral research fellow Astgik Petrosyan. Together, the team studies the structure of the glomerulus to better understand how and why their ability to filter blood breaks down.

“A big challenge in the kidney research field has been trying to replicate the glomerulus in vitro,” says Dr. Da Sacco. “In particular, the glomerular filtration barrier is very difficult to recreate in a lab using standard techniques.” Because of this, most published studies have used an artificial membrane between the two cell layers. While fluid can be exchanged, the cells cannot communicate across this membrane in the same way they do biologically. “This results in a model that doesn’t really filter properly,” he explains.

The critical component missing from current experiments is a filter that is selective and allows proper cell-to-cell communication. Dr. Da Sacco and Dr. Perin set out to grow healthy kidney cells in a way that allowed for the natural glomerular barrier to form, just as it does in the body. Using specialized, compartmented containers called OrganoplatesTM, the investigators did exactly that.

A model glomerulus that functions nearly identically to that found in real kidneys. They are calling this model, which is derived entirely from healthy, human kidney tissue, a glomerulus on a chip.

On one side of the cells, investigators add fluid and, on the other side, they collect what the ‘glomerulus’ filters, which is called the filtrate. In their experiment, the scientists added blood serum from healthy individuals. Without the use of a manufactured filter, the team’s in vitro glomerulus behaved as human kidneys are expected to act: proteins remained in the serum while smaller molecules passed into the filtrate. “The barrier that our cells naturally formed is selective, just as it would be in a fully-functioning kidney,” says Dr. Da Sacco. “It is remarkable.”

This model represents a substantial leap forward from the current standard of in vitro kidney research. “Our system behaves like a biologically, physiologically correct glomerulus,” says Dr. Perin. “This opens up the door for us to understand what we still don’t know – the molecular mechanisms of injury in CKD and, more importantly, how to prevent damage.”

While this seemed a distant goal in the past, Dr. Da Sacco and Dr. Perin are already recreating and studying the disease state in their model. When the investigators added serum from patients with CKD, they found that the glomerulus exhibited the same type of damage observed clinically: proteins began to leak through the compromised filter. Protein levels measured in the experimental filtrate matched patient clinical filtrate samples with a correlation of approximately 90%.

This breakthrough paves the way for numerous clinical applications. In the burgeoning era of personalized medicine, a preparation such as this can be used to examine molecular mechanisms of kidney damage in individual patients. Disease progression can also be monitored over time using serial blood sampling. Also, the model could be used for screening new drugs prior to human clinical testing.

Dr. Perin and Dr. Da Sacco, who are also Assistant Professors in the Keck School of Medicine at USC, are co-senior authors on the publication. Other authors are Paolo Cravedi of Icahn School of Medicine at Mount Sinai, NY; Valentina Villani of CHLA; Andrea Angeletti of the University of Bologna, Italy; Joaquin Manrique of Complejo Hospitalario de Navarra, Pamplona, Spain; Alessandra Renieri of Azienda Ospedaliera Universitaria Senese, Siena, Italy; and Roger De Filippo of CHLA.

The study was funded by the GOFARR Foundation and the Schenkman Family, grants from the Alport Syndrome Foundation, a TSRI Research Career Development Award, and a Wright Foundation Pilot Award. OrganoplatesTM were purchased from MIMETAS, who the authors wish to thank for providing invaluable training, technical support, and assistance. 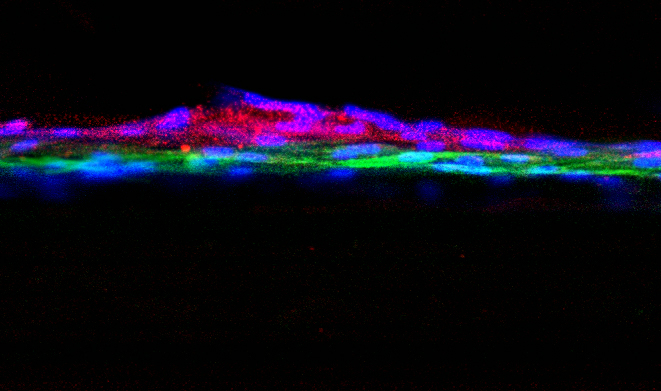 Healthy human kidney cells (visible in red and green in this fluorescent image) grow in layers to form a filtration barrier in vitro. Image courtesy of Dr. Perin and Dr. Da Sacco.