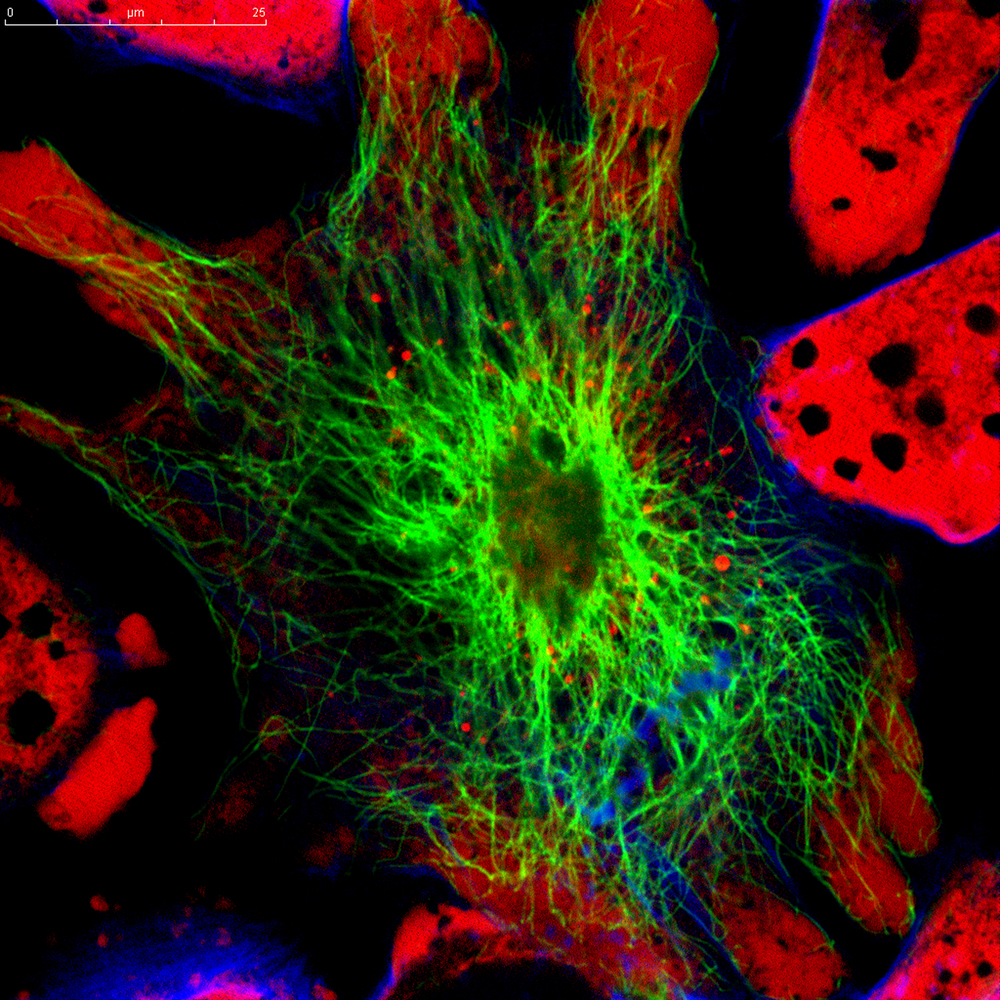 Neuroblastoma cells under a microscope labeled with fluorescent molecules. Image courtesy of Shutterstock.

Building upon more than two decades of basic research conducted at Children’s Hospital Los Angeles, Araz Marachelian, MD, of CHLA, and her colleagues at pediatric academic centers across the U. S., have shown that an immunotherapy that until now has only been available to patients enrolled in research studies, is equivalent to the product that has been manufactured for commercial use and can be made available to all patients. The data, published in the journal Cancer Chemotherapy and Pharmacology on January 20, was pivotal to the FDA approval of the first immunotherapy for the treatment of a pediatric cancer.

Neuroblastoma is a cancer of the nervous system that exists outside the brain and typically occurs in children 5 years of age or younger. Despite very aggressive treatment, many patients fail to respond to therapy or experience recurrence of their disease. Approximately half of all children with this disease die within 5 years of diagnosis.

A treatment, called dinutuximab, was developed to harness a patient’s own immune system to battle neuroblastoma. The Children’s Oncology Group conducted a randomized, phase 3 trial of dinutuximab and found that children treated with the monoclonal antibody had improved event-free survival and improved overall survival compared to patients who did not receive the immunotherapy.

Dinutuximab used in clinical trials was manufactured by the National Cancer Institute (NCI) in relatively small quantities. In order to make the immunotherapy commercially available, the monoclonal antibody had to be produced in larger quantities by a pharmaceutical manufacturer. Also, the commercially produced version of dinutuximab had to be tested in patients and shown to be equivalent to the NCI-produced version.

“After a two year study that compared commercially manufactured dinutuximab to the material produced by NCI, we see no difference in how patients metabolize or respond to the treatment,” said Araz Marachelian, MD, principal investigator at CHLA. “I, along with my colleagues across the country, are proud of the work that has been done to make additional therapies available for children with this devastating disease.” Marachelian is also an assistant professor of Clinical Pediatrics at the Keck School of Medicine of USC and director of the New Approaches to Neuroblastoma Therapy (NANT) consortium. Through NANT, she is currently leading two active trials investigating the use of dinutuximab in combination with other agents.