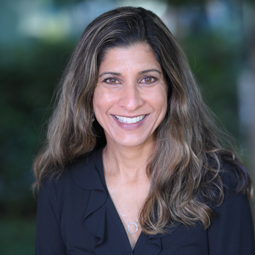 “In neurodevelopmental disorders such as autism, we know that changes in brain development can begin before birth,” says Dr. Jeste. “But we are diagnosing kids with autism after age 2, thus missing out on this amazing window in early development, when the brain is forming so many important connections.”

Dr. Jeste—who joined Children’s Hospital Los Angeles in July as Chief of Neurology and Co-Director of the Neurological Institute—has devoted her career to improving precision in the diagnosis and treatment of neurodevelopmental disorders. In her research, she follows babies at risk for autism from birth to age 3—using EEG to map brain activity and development, and studying eye tracking and motor, language and social skills.

Her lab defined early predictors of autism in babies with a genetic condition called tuberous sclerosis complex (TSC) at age 9 months, which has led to a clinical trial of a behavioral intervention to prevent autism in that condition. Her team also is studying potential biomarkers to measure treatment success. “There’s been an explosion of clinical trials in genetic forms of autism,” she notes. “But how will we know if a drug has worked? It’s not straightforward, and we need more objective measures.”

Dr. Jeste spent 11 years at UCLA, where she was Director of the Care and Research in Neurogenetics Program. A conversation with Pat Levitt, PhD, at a conference in early 2020 piqued her interest in CHLA. “It’s an exciting time in the field,” she says. “If CHLA can be the hub for these leading-edge studies and trials in autism, we can make an impact that goes far beyond our hospital.”

Outside of work, Dr. Jeste is a “tennis mom” to her two sons, ages 12 and 14, who are competitive national players. She also loves to run. This month, she’s running a half-marathon with Susan Durham, MD, Co-Director of the Neurological Institute.

The daughter of two physicians, she knew from age 4 she wanted to be a doctor. “I love being inside the lives of my patients,” she adds. “I feel grateful to be on this journey with them.”