What Physicians Should Know About Brain Stem Gliomas in Children

Published on
February 11, 2021
Categories:
For Physicians and Clinicians

They are not all created equal, and why that is important

Brain tumors are the most common cancer in children and account for the majority of cancer-related mortality in the pediatric population. Approximately 11% of pediatric brain tumors occur in the brain stem and of those, 80% are diffuse intrinsic pontine glioma (DIPG), while the remainder are low grade glioma (LGG).1 Patients with these tumors may present with similar physical exam and imaging findings. However there are distinct differences that are important to elucidate, as these two entities have vastly different management strategies and prognoses. 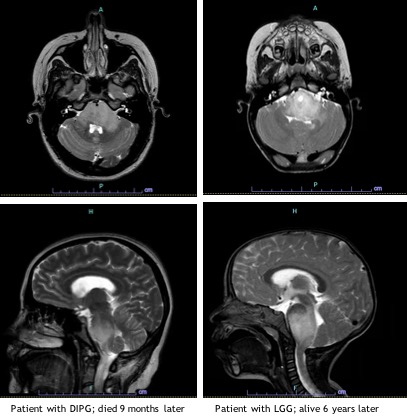 Diffuse intrinsic pontine glioma is a devasting pediatric brain tumor affecting approximately 300 children in the U.S. each year1. The median age at time of diagnosis is 6 to 7 years, and it occurs in boys and girls with equal frequency. DIPG has historically been diagnosed based on clinical presentation and imaging findings. Children present with an acute onset (< 3 months) of symptoms that correspond to the location of the tumor including cranial nerve deficits, long tract signs (hyperreflexia, positive Babinski sign, weakness) and cerebellar signs (ataxia, dysmetria, dysarthria). Patients may present with obstructive hydrocephalus. DIPGs are expansile, infiltrative tumors centered in the pons, involve at least 50% of the pons. While a CT scan can be suggestive of DIPG, MRI is required to make the diagnosis. At Children’s Hospital Los Angeles we use MR spectroscopy (MRS), an advanced imaging technique that measures concentration of metabolites in tumor tissue.

In the past, biopsy was not routinely performed in patients with classic radiographic findings of DIPG as it was thought too risky and without clinical benefit. Recent studies have shown that biopsy is in fact safe2 and is now routinely offered to patients at time of presentation. The potential advantages of obtaining tumor tissue include confirmation of diagnosis, which is especially helpful in cases with indeterminate radiographic findings; determination of molecular features to allow for administration of targeted therapy; and the advancement of clinical and basic research efforts. The ability to obtain tumor tissue has led to the discovery that the vast majority of DIPG harbor a mutation in the genes that encode for histone 3 (H3K27M mutation), which is pathognomonic for this diagnosis. This influences epigenetic regulation ultimately leading to oncogenesis.3

The prognosis for children with DIPG is a median survival of less than 1 year and overall survival of less than 1% at 5 years.4 Focal radiation therapy is the only treatment proven to prolong life, conferring an average of 3 months survival benefit. Given the lack of currently available effective therapies, there are an increasing number of clinical trial options for children with DIPG employing the use of epigenetic modifiers as well as a variety of immunotherapy strategies. We treat these children on clinical trials whenever a family is interested and an appropriate trial is available.

LGG of the brain stem are less common, and often times initially misdiagnosed as DIPG. These tumors are slow growing, leading to more subtle neurologic signs and symptoms with a more indolent course. As with DIPG, MRI is required to properly evaluate these tumors which have the typical features of LGG. They tend to be well circumscribed or have an exophytic component and may arise from any brain stem location. Because these tumors may not be entirely infiltrative they are more amenable to surgery.

The diagnosis of LGG is made based on histologic and molecular features. The vast majority of pediatric LGG, including those in the brain stem, are caused by an alteration in the mitogen-activated protein kinase (MAPK) signaling pathway. The most common alterations include BRAF mutations or fusions.5 Brain stem LGG are also very common in children with Neurofibromatosis 1 (NF1).

The prognosis for children with brain stem LGG is very good, with 5 year overall survival of higher than 95%.6 Because the mortality rate for children with these tumors is so low, it is important to carefully consider the need and options for therapy. There is a subset of patients for whom close expectant observation is an appropriate option. This is especially true for LGG in children with NF1, as these children will often remain asymptomatic. The decision whether or not to initiate therapy is based on many factors and requires input from experts in pediatric neuro-oncology, neurosurgery, neuroradiology and neurology. In children who are symptomatic and require therapy, treatment consists of resection when feasible. While gross total resection is typically not feasible due to the location, it is curative. In symptomatic children for whom complete resection is not an option, we treat with chemotherapy. At CHLA, we avoid radiation therapy in young children whenever possible due to associated long-term morbidity including secondary malignancies. Conventional chemotherapy consists of low-intensity therapy, which is typically not associated with long-term toxicities or significant myelosuppression. The discovery that LGG are MAPK-driven tumors has led to development and use of oral molecularly targeted therapies, including BRAF and MEK inhibitors. We have completed a number of studies investigating the safety and efficacy of these agents and are now comparing them to traditional chemotherapy in phase III clinical trials.

If you suspect a brain stem glioma in your patient

While DIPG and LGG of the brain stem can initially be difficult to distinguish, it is of the utmost importance to do so, because the treatment and prognosis for these two tumors could not be more different. The diagnosis and treatment of these patients requires a team of physicians with specific expertise in pediatric neuro-oncology.

If you suspect that one of your patients has a brain stem glioma, please contact the Neuro-Oncology Program at CHLA at 323-361-4100. 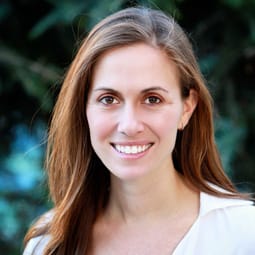 Learn more about the Neuro-Oncology Program.