Published on
February 9, 2022
Categories:
For Physicians and Clinicians, Hospital Programs 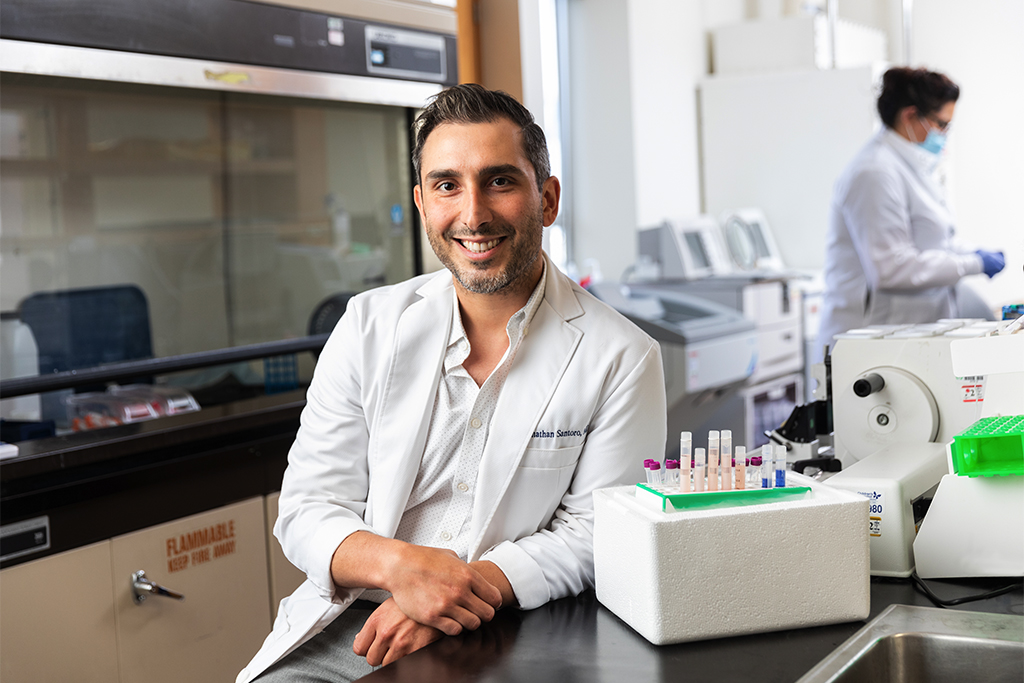 Jonathan Santoro, MD, shares his team’s latest research and fellowship—and why he’s in a ‘race’ to discover new approaches to care.

The Neuroimmunology and Demyelinating Disorders Clinic at Children’s Hospital Los Angeles offers excellence in care for a full range of neuroinflammatory disorders in children—from multiple sclerosis (MS) to autoimmune encephalitis to Down syndrome regression disorder.

But the team is also focused on developing new approaches to care and training the next generation of pediatric neuroimmunologists. Below, clinic Director Jonathan Santoro, MD, talks about the team’s newest research and fellowship—and the urgent need to advance new treatments for these patients.

Why did you create a pediatric neuroimmunology fellowship?

Traditionally—and this is still the case today at many centers—neuroimmunology has been focused mostly on multiple sclerosis and neuromyelitis optica. But we’re learning more and more that there are many other pediatric disorders that have a neuroinflammatory component that has been underrecognized and undertreated.

Pediatric neuroimmunology is becoming increasingly important, but there are very few training programs. Our fellowship, which will start in July, is one of only four in the entire country. In the future, I think every children’s hospital will have more than one specialist who works in this area. This isn’t just an interest area anymore. It’s a career.

Your team has been studying moyamoya in Down syndrome. What are you learning?

We recently received a five-year grant from the National Institutes of Health (NIH) to study how to predict the development of moyamoya disease (a vascular disorder) in patients with Down syndrome before any symptoms appear.

Individuals with Down syndrome are 26 times more likely to develop moyamoya, but right now, there’s no screening for it. For nearly 75% of patients, the first symptom is a stroke. Our research is looking at noninvasive ways to identify it using a combination of blood pressure screening and transcranial doppler ultrasound, which can measure how fast blood is moving through the vessels.

Your team has taken a different approach to Down syndrome regression disorder. Why?

This is a disease where individuals with Down syndrome who are relatively high functioning suddenly lose their ability to do activities of daily living. They can’t dress or feed themselves, and they get a muscle stiffness called catatonia. This often happens out of the blue, over just a few weeks.

Traditionally, it’s been thought of as a psychiatric condition, and neurologists weren’t even involved in the care of children with these symptoms. When our team started evaluating patients with it, we wondered: If this patient didn’t have Down syndrome, what would we be testing for? And our answer was autoimmune encephalitis

We created an advanced neurodiagnostic workup loosely based on autoimmune encephalitis, involving MRI, EEG and lumbar puncture. We found that in about 15% to 20% of these patients, there’s an inflammatory component to the disease that is rapidly reversable with immunotherapy. While we used the construct of autoimmune encephalitis to perform the highest yield testing, we believe that this condition is unique and may be related to a predisposition toward autoimmunity that all people with Down syndrome have.

We’ve had patients and families flying in from all over the country for an evaluation with us, and we’re actively helping other centers implement this workup and treatment paradigm.

What research are you doing on this condition?

We recently received a private donation from one of our families to support studies into neurogenetics and inflammatory signaling in Down syndrome regression disorder. It’s exciting because there has been virtually no research into this condition, even though it’s been described for more than 60 years.

One of the most frustrating things I hear people say is, “This is just part of Down syndrome.” But that’s not the case. This is an example of how having training in both neurology and immunology can help doctors look at these conditions in a new way.

Your team recently published about responses to childhood vaccines in MS. What did you find?

We looked at both hepatitis B and chickenpox, and we found that after vaccination, children with multiple sclerosis had low rates of antibody-mediated immunity against both of those viruses. This isn’t entirely unexpected, but in the setting of the COVID-19 pandemic, it’s an important factor to keep in mind.

The results also tell us something about MS itself. It’s often labeled as an autoimmune disease, but this data suggests it’s more likely a disorder of immune regulation.

What motivates you to do research?

Research has the reputation of being very slow and academic, but I feel like I’m in a race all the time. With many neuroimmunology disorders, there’s nothing out there for these children, and we need to fix that.

As a field, we really need to move as fast as possible—in a scientifically sound way—to learn more about these rare conditions. If we can advance new treatments and approaches to care, we can make a tremendous difference in the lives of these patients.