Published on
November 15, 2021
Categories:
For Physicians and Clinicians, Work That Matters 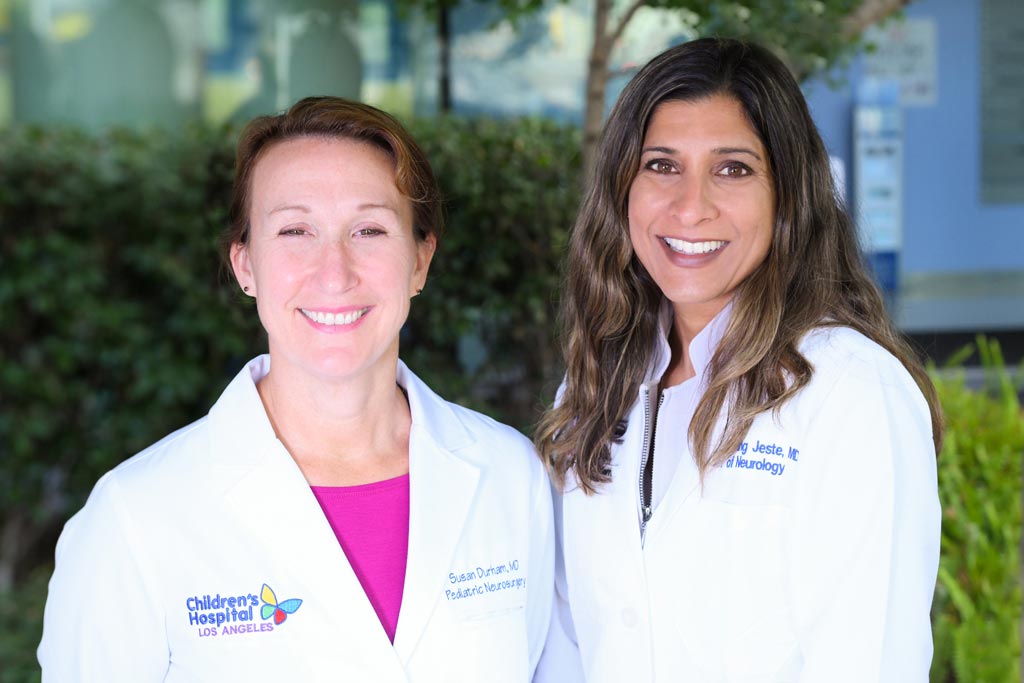 It’s a comment that Susan Durham, MD, MS, has heard several times since 2016—when she became only the second woman neurosurgery chief in the country, at University of Vermont Medical Center. Since 2020, she’s been Chief of Neurosurgery at Children’s Hospital Los Angeles, and today, she co-directs the Neurological Institute with another woman leader: Neurology Chief Shafali Spurling Jeste, MD.

Having both neurosurgery and neurology led by women is highly unusual—even in a world where medical school graduates are now split nearly evenly between men and women. Recently, Dr. Durham and Dr. Jeste sat down to talk about the gender disparities that still exist in the neuro world—and how today’s leaders can help close those gaps.

How unusual is it for two women to lead a neurological institute like this?

Dr. Durham: It’s rare. First of all, only about 7% of practicing neurosurgeons today are women. When you look at women in leadership, it’s much lower. The first woman to lead an academic neurosurgery program in the country was Dr. Karin Muraszko at the University of Michigan. That was in 2005. In 2016, I became the second. Today, fewer than 5% of neurosurgery training programs are led by women.

Dr. Jeste: Dr. Durham is a true pioneer in her field. In neurosurgery, there is much more of a skew between men and women. In medical specialties like neurology, the landscape is improving slowly. Approximately 50% of trainees in child neurology now are women, but disparities remain in leadership. Less than 25% of neurology chiefs are women.

Why do these gaps exist? What are the barriers that prevent more women from reaching leadership positions in the field?

Dr. Durham: Part of it is due to the pipeline effect. If you look at the number of women who were going into neurosurgery 20, 30 years ago, it was really low; it was maybe 5% of residents back then. So that means the number of women today who are now in the position to become leaders is by definition going to be low, too.

But there are also issues with mentorship and sponsorship of women. And those are very different. Mentorship is good, it can get you in the door, but sponsorship is what’s most important. You need someone to sponsor you or nominate you for an editorial board, for a board of directors, or for scientific committees. It’s that type of sponsorship that’s often been lacking for women in a lot of academic neurosurgery environments.

Dr. Jeste: The other critical piece is work-family balance. Many times, women assume responsibility for child care and family management. And that can lead to them making career choices that they may not have made if they’d had more support or time.

How can leaders foster that work-family balance?

Dr. Jeste: I think we need to lead by example. I see Dr. Durham making sure her kids are priorities, and I do so as well. For example, today is my research day, but because my kids have a school holiday, I woke up early to do some writing and then will go into my lab later than I normally would so that I can have breakfast with them.

But I recognize that it is much easier in a leadership position or with a more research-heavy profile to have some control over your schedule. It’s much harder when you’re a trainee or junior faculty and you have clinical responsibilities most days. As leaders, we need to be very proactive about making sure that both women and men feel supported and encouraged to balance family and work.

How do you combat subtle, unconscious bias?

Dr. Durham: I try to open people’s eyes to simple things like the words used when describing residency applicants. There can be a tendency to assign attributes like nurturing and caring to women, while men are assigned adjectives like assertive and courageous. They’re all great attributes. But why can’t people be both? Does having what are considered masculine attributes make someone a better neurosurgeon? It doesn’t.

What advice would you give women starting out in the field?

Dr. Jeste: You have to find a way to prioritize what is most important and set boundaries ahead of time to protect those priorities—both personal and professional ones. It is as empowering to say no as it is to say yes. I also think it’s important to remember that our jobs as health care providers are inherently integrated into and integral to our lives.

Rather than trying to compartmentalize work, I suggest trying to find ways to include other parts of your life into work. For example, I talk to my kids about my job and what I love about it. They have grown up, hopefully, respecting the fact that while I may not be around all the time, I am away doing something that is meaningful and that is helping others. In the end, if we love what we do, we find a way to make it work. That’s the goal.

Dr. Durham: Sometimes you have to make compromises and detours along the way that you didn’t plan for. You don’t have to make associate professor or become a partner in a practice in five years. When my kids were really little, I went from full-time to part-time for a while. It’s important to be OK with that and not feel like a failure. You will get there—just maybe not along the path you thought you were going to take.

How does Children’s Hospital Los Angeles foster a diverse and inclusive environment?

Dr. Durham: There’s an incredible emphasis here on inclusion and diversity. Just putting the two of us as the face of leadership for the Neurological Institute is a great example. It’s an important statement.

Dr. Jeste: Children’s Hospital does an excellent job of bringing in and supporting women leaders and diverse leaders overall. I think that’s so important. Look at the children that we take care of. We have an extremely diverse patient population, not just in terms of race and ethnicity, but socioeconomic backgrounds as well. Diversity, inclusion and equity—they’re not just buzzwords. They’re who we are as a hospital.